Humility is also bad against oko, just generally which is a real concern in vintage I would think.

It seems to be the biggest drawback of Humility other than the mana cost is being Disenchanted or Force of Vigored.

Percistent effects and timing. Oko can make an army of 3/3s even with humility out.

@vaughnbros You mean the "enters the battlefield with X +1/+1 counters" on Ballista, Walker, etc? That's not an ETB trigger, they just come in with those counters.

The rules text regarding this was changed in 2017. Creatures that "enter the battlefield with" no longer gain the with.

PO as a 4 of homogimizes all artifact combo decks into a PO shell.

If library is coming in for 11 matchups, maybe you could mpve it to md.

Legacy elves doesn't play force of vigor or ouphe main decked because they don't answer half the meta... Apples and Oranges.

I don't think a vintage elf deck would look identical to a legacy elf deck.

For a value engine only deck such as BUG, I dont think this card is good. Any time you would want this in those shells, I think Veil of Summer is better. Providing uncounterability is strong, but it is just a 1/1 after that, veil is "hidden" in hand and cantrips.

Elves is the ideal shell because this card synergizes with most of the other cards in the deck (heirarch, birchlore, symbiote) and the haymakers that deck plays are extra vulnerable to countermagic (natural order). 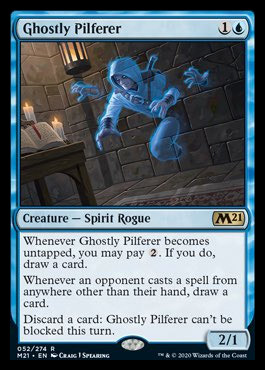 Time to dust off my janky uba mask brews

Unfortunate. Hope it doesn't become the norm for future years.

Friends and I have been testing mono red gob list. Basically an aggro list with red blast and null rod for disruption.

Snoop is a great value engine, and theres minimal deckspace requirement to run a copy of kiki and mogg fanatic.

We do not run ringleader or matron, both engines are too slow for vintage we've determined.