The entire B&R argument can be summed up as:

"Paper's too OP we should restrict it; but Scissors are fine" ~ Rock.

A B&R should not be used to cater to pet decks. I think the format is adapting fairly well, as we tend to see different decks on the weekly challenge top 8s. Who knows, maybe more blue decks top 8 because people like playing blue. May dredge doesn't top as much because people think it's boring.

I guess shops is here for good. Interesting how he admits it now.

I’m playing red shops. I like it because I think it’s fun and welder is one of my favorite cards. Also I think Ensnaring Bridge + Null Rod is fairly well positioned right now.

Wow@this merfolks list. I remember months ago when people laughed at me and said vial was trash in vintage. I guess this top 8 means it's still bad, but less trash

Can we take a moment to appreciate how baller the shrapnel blast list is? It's amazing.

@Smmenen off topic but I just want to point out that the placebo effect is a legitimate treatment, especially in the sense of somatic disorders where mental illness may manifest as physical symptoms. You give the patient reassurance and placebo to improve his/her mental health and the physical symptoms may improve.

Win rate matters because top 4ing isn't supppsed to be looked at in a vacuum. You need to look at top 4 penetrance. If SIGNIFICANTLY more people play blue decks, you can assume that more will top 4 (assuming 50% win rate). Now if a greater proportion of shops players top 4 (proportion, not raw number), then you can argue that despite less total tops, it has a higher penetrance and is this a better deck for the current meta.

Here’s an album of my legacy elf deck. 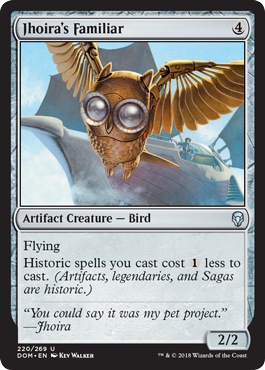 The most obvious comparison is Foundry Inspector. This card costs 1 more, but has flying to fly over ground creatures to attack planeswalkers. Can also trade with Delver.

Con is that it can't be cast off of turn 1 workshop and has 1 less power.

@smmenen it just makes so much sense. Fastbond would open up new archetypes and it wouldn’t be overwhelming. 4x probe isn’t nearly as abusive without 4x mentor. Perfect information is bleh, but it’s not like storm will dominate (if anything, it’s underperforming atm). Ravager is a good ban because it homogenizes shops too much. Without it, I can see Stax making a comeback. 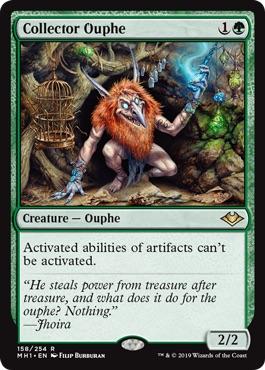 Starter: this is the null rod on legs we've all been asking for. Not white, but it shouldn't matter since most of the hatebear type decks run green for DRS anyways. I think this would be really strong in a Junk type hatebear deck.

The thing is lackey or instigator needs to connect to cheat something in. Captain needs to just attack.

Current draft of a Goblin stompy deck based off of the legacy version. Wins with moon effects and random beats. Pretty fun.

Reading through this thread makes me glad I chose medicine. I would be absolutely awful at logic like this. But sit me in a room and make me memorize thousands of diagnoses and treatment algorithms and I'll be fine.

I think what @HouseOfCards is getting at (correct me if i'm wrong) is the archtypes currently list mentor, big blue, and blue control as different decks were as shops is just one category. However, within shops, there is stax, TKS, ravager, percusor golems, etc.

Basically if we VERY broadly organize decks, we have

If blue based control was broken down, you'd have mentor, big blue, etc. The issue is why are blue decks separated when shops aren't. I'd argue stax vs ravager MUD has just a big difference as standstill vs mentor.

Salvager is probably one of my favorite creature cards (after Goblin Welder of course :P). One of the fundamental questions we have to ask is that in a U/W/x style deck, what does Salvager + Lotus + Spellbomb/Ballista offer that current decks do not. You get the instant "I win" factor, but the combo is very soft to graveyard hate, Phyrexian Revoker, Spheres, Null Rod, Stony Silence, and Pithing Needle.

Another deck I want to look at that has similar weaknesses and relies on resolving a 4 CMC spell to "go off" is Paradoxical Outcome based decks. I feel like compared to PO, Salvager + Trinket mage is just clunkier + draws less cards.

What you gain however, is a better plan B. You can beat people with 2/2s and 2/4s. That used to be good enough. But recently, I feel like with the new creatures and how aggressive shops are, Eldrazi being a thing, and tokens + STP everywhere, that bomberman is just too fragile.

Of course I hope someone proves me wrong because I want to play bomberman again.