Posts made by dshin
posted in Single-Card Discussion • read more

Contract from Below might be a better comp than Wheel of Fortune, since the effect is one-sided.

@fsecco I think you mean, “if you are on the play and you fetch, your opponent can guarantee you will lose the bid”.

Opponent might not want to exercise that guarantee because he does not want to forfeit the ability to activate fetchlands or to cast FoW/Misstep/etc. after the wheel.

Maybe both Golos and a companion can be used, in order to have multiple mana sink options? Golos might want to pull in black mana sources (black lands, Deathrite Shaman), which then opens the door to tutors, which in turn could bring more consistency to a highlander deck. Not to mention the Coalition Victory dream...

Alternatively, if going down the Yorian route, perhaps the Risen Reef/Young Pyromancer/Chandra, Acolyte of Flame package could make sense. After all, both Omnath and Yorian’s ETB have some synergy with Risen Reef. Your RUG Elementals deck thread noted that the inability to run Force of Vigor due to lack of green cards hurt the deck; maybe the addition of Omnath and Sylvan Library can help reach the required critical mass of green cards. Also, I think the cost of having a card like Blightsteel in your deck diminishes the larger your deck size, as the probability of drawing it decreases, so Yorian might justify bringing in a Tinker package...which might warrant bringing in Golos as a potential Tinker target.

Volrathxp appears to have tried a Yorian Elementals deck, using an inferior Omnath.

I think another way to frame @chubbyrain1 's point of view is as this:

The publishing of this card is approximately equivalent to adding the following card errata on Alhammaret's Archive:

How many cards in Magic, if given the above errata modification, would move the card from vintage-unplayable territory to vintage-playable territory? Is there reason to believe that Alhammaret's Archive is one of those cards?

There is another consideration worth bringing up.

In the past, players have complained that vintage had become a format where there are no meaningful decisions to be made after the sideboarding and mulligan phases of the game.

From what I've seen, it appears that Lurrus leads to increased interactivity, and leads to the better player winning more often.

For instance, in this video, Andrea Mengucci says that he achieved an overall record of 33-3 with a Lurrus deck, facing a lot of other Lurrus, and that the games are very "grindy", with many games finishing due to a player running out of time due to the sheer weight of so many difficult decision points. Lsv tweets here that he went 8-1 in a challenge with the same deck, mostly facing Lurrus.

One could reasonably hold the opinion that the pro of increased interactivity/gameplay-skill outweighs the con of decreased deck diversity. Perhaps future companion printings can increase diversity and we can get the best of both worlds.

@ten-ten I don’t think this is necessarily so. Imagine hatebears that strongly counter Lurrus are printed, but come with deck building restrictions like no blue cards, or no artifacts, or no spells with odd CMC, or color with maximum devotion is red. You could have a wide palette of available hatebears, perhaps one against every major archetype of the format in your sideboard, but doing so might require thinking outside the box of existing archetypes. This could lead to format diversity.

New companions can be printed to mitigate Lurrus domination without introducing power creep. To see this, imagine they print a companion that is a Relic of Progenitus or Nihil Spellbomb on a beating stick. Now running Lurrus and all those baubles (instead of Mentor or Tinker) might become a bit of a glass cannon gambit.

With enough hatebear companions, I could envision an interesting meta where a highly defensive deck with multiple companions in the sideboard (anti-blue companion, anti-graveyard companion, anti-workshops companion) becomes viable. This could open up the deck building design space, and increase the pool of vintage viable cards (just like Lurrus brought back previously unused cards like baubles and Dead Weight).

It sounds like in your simulation you changed the card Force of Vigor to only have 1 target instead of 2. It is no wonder then that it performed worse than alternatives.

What if two people sit down to play Vintage, and rather than bringing an already constructed set of 60+15, they take turns constructing their decks on the spot, one card at a time? This would look like, for example:

After this construction they would engage in a standard best-of-3 match. Would this make for an interesting format?

In the above example, Bob gets to optimize for his opponent by for example not including Mental Misstep.

This can be extended to, say, 4 players, followed by a round-robin set of matches between them, although you'd probably want simultaneous card selections rather than round-robin to save time. Maybe card selections can be made in groups of 4 cards at a time or something.

What would the "meta" be in this format?

To be clear, just because the game enters an infinite-loop within the rules of Magic doesn't mean that a software program implementing those rules must also enter an infinite-loop. A program like MTGO can, in principle, perform logical deduction on the game state to determine that the game rules yield an infinite-loop, and then output the correct game result (the rules of Magic specify that infinite-loops result in draws). The paper shows that a program like MTGO cannot do this deduction perfectly. Any such attempt will be "buggy" - not due to incompetence of the programmers, but due to the laws of mathematics. But it is certainly plausible that, if well programmed, such a program can do it well-enough to cover all "real-world" situations.

@inkfathombiomage That’s like asking, why doesn’t an integer that is theoretically even and odd count? No such thing can exist.

The current MODO will either output an incorrect value on some inputs, or infinite loop on some inputs. Any theoretical modified version of MODO will have the same property.

Rather, they only consider game states where neither player has any more decisions to make. In MTGO terms, both players are essentially in "F6" mode. The question is, if we restrict ourselves to only those types of game states, is it possible to write an algorithm that determines who will win the game after the remaining forced actions and triggered effects are processed? The paper proves that the answer to this question is no.

To be very precise on what this means, consider the problem of adding two numbers, x and y. Here are 3 candidate algorithms (written in python) to solve this problem: 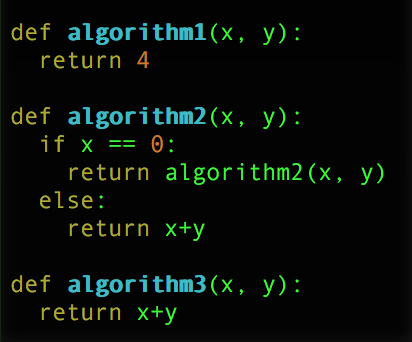 The authors proved that if you consider the universe of all possible algorithms that accept a game state of Magic as input (even if we restrict ourselves to those "F6-mode" states where there are no more decisions left to be made by either player), and outputs a winner as output, then every single algorithm in that universe will be like algorithm1 or algorithm2 in my example. In other words, any such algorithm will either return an incorrect output on some inputs, or go into an infinite loop on some inputs. If someone tells you, "hey, I wrote a computer program that correctly outputs the winner given an F6-mode game state as input, without infinite-looping", that'd be like someone saying, "hey, I discovered an integer that is neither even nor odd!" It's simply a mathematical impossibility, a claim that can be rejected on its face, without even looking at the code.

@protoaddict Yes, you are absolutely right, I forgot about basic lands when I wrote that.

@maximumcdawg “predict” is even a stronger word than necessary. The paper shows that even when there are no more decisions left to be made by either player, only forced actions and triggered effects left to resolve, it is impossible to write an algorithm that determines the winner.

I read the paper and so can provide a layman’s summary.

The authors considered game states where there are no more decisions left to be made by either player, and no more randomness. There is only a sequence of forced actions and triggered effects left to be resolved.

The sketch of the proof is that they cleverly construct a game state that can represent the internal state of a Turing machine, with the mechanics of the remaining triggered effects mapping to the execution of the Turing machine’s instructions. A Turing machine is basically a representation of any algorithm (or computer program). Here is a snippet of their construction:

Each Rotlung Reanimator needs to trigger from a different state being read – that is, a different creature type dying – and needs to encode a different result. Fortunately, Magic includes cards that can be used to edit the text of other cards. The card Artificial Evolution is uniquely powerful for our purposes, as it reads “Change the text of target spell or permanent by replacing all instances of one creature type with another. The new creature type can’t be Wall. (This effect lasts indefinitely.)” So we create a large number of copies of Rotlung Reanimator and edit each one. A similar card Glamerdye can be used to modify the colour words within card text.

You can sections III and IV of the paper for full details.

there are things other than planeswalkers that can be proliferated, though I'm not sure if pentad prism is vintage playable

Gemstone Mine is a card that benefits from the proliferate mechanic. There could be some weird tech with cards like Tanglewire or Smokestack.

You can also use proliferate on your opponents’ permanents. Mystic Remora and Chalice of the Void are a couple examples of cards against which that option could be relevant.

Nothing terribly exciting, but just some possible interactions to keep in mind if the right proliferate card comes along.

This card is potentially the first main-deckable graveyard disruption that has an element of surprise, which might open up new tactical scenarios. The storm player facing down Deathrite Shaman knows to be careful when firing off Cabal Ritual or Dark Petition; otherwise he knows that he is highly unlikely to run into Ravenous Trap. But with this card the risk of surprise graveyard disruption becomes higher.