303 players showed up in Pittsburgh to play in the latest iteration of Vintage's most prestigious event of the year. Congratulations to Joe Brennan for being our deserving champion and taking home an amazing painting! 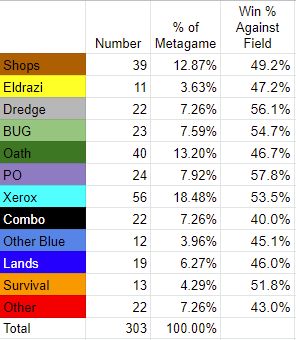 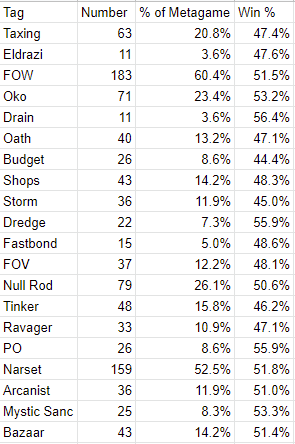 This has been a year of cataclysmic shifts, with a slew of new printings, restrictions, and unrestrictions. Along with this came a shift in classification to attempt to better capture the current metagame. Lands contains Dark Depths (Dark Times) and both Fastbond archetypes (Crab Shack and Ziasbond). Big Blue and Blue Control have been combined into Other Blue due to their continued decline.

The pace that Magic Online innovation permeated Champs this year really amazed me. Matt Murray's Mystic Sanctuary RUG Walkers deck, which did not exist a week before Champs, made 25% of the top 8. The Oko Oath deck which won the Format Playoff a week prior was almost universally adopted by the 13% of the metagame represented by Oath.

My biggest takeaway is the omnipresense of Narset. Of the 165 non-dredge FOW decks, fully 150 ran Narset. Everyone who has played a blue mirror lately knows how frequently Narset is encountered, but that is truly staggering.

The second is that, for the first time since we've recorded this data, shops had a sub 50% winrate at an Eternal Weekend. Its two most notable predators, Oath and PO, were heavily present in the metagame. Equipped with Force of Vigor, Dredge was also able to do significantly better against Shops than in previous years.

Thanks to @Jaco for finishing scanning decklists so quickly, @Log for his considerable help slogging through decklists, and Matt Murray for help in classifcation!

If you have any objections to how we classified your deck, or spot an error, send me a PM.

Those aren't mechanical/reflex-based in the same sense. I can forget how much I should mulligan without enhanced RNG, that in paper my beginning of combat doesn't happen without intervention, to present my deck to my opponent, and announce triggers, but realistically I'm not going to forget that I can't put ancestral recall in my legacy deck or that I should put 40 cards in my limited deck. Granted remembering what the normal number of lands in a 40 vs. 60 card deck is a slight annoyance, but not something I'm going get burned on. I'll grant you that the match structure could lend itself to different risk analysis though.

Thanks for the episode. As @ChubbyRain alluded to above, it's nice to have a level discussion about this instead of forecasting the sky to fall.

I do have an objection to Stephen's comment at the end that, paraphrasing "it's almost inevitable and surely beneficial to have different mulligan rules for different formats". Having the mechanics of Magic be constant is a principle that should only be violated as a last resort. Avoiding "gotcha" moments where the way one usually plays Magic forces them to make an error should be avoided. Most of us have missed the ability to scry after mull'ing when that rule was first introduced. Me playing BO1 on Arena assuredly messes with my ability to mulligan in paper without "enhanced" Arena RNG. Hell, I play almost exclusively on modo and the mechanics of having to deal with physical cards is already an extreme distraction for me when playing in paper. WOTC benefits from encouraging transitions across platforms and formats being as seamless as possible. While this can and is violated, the reasons for it need to be extremely compelling.

Thanks for taking up the mantle of this!

I noticed for your archetype and tags you have a comment that this "needs an algorithm". When I did this with Matt I indeed used a python script to parse WOTC's webpage and made a determination of tags and archetypes based on the presence of various cards. I can send it to you if you'd like.

I find having an individual token to represent each of your creatures makes your opponent appreciate the gravity of the situation and concede earlier.

Thanks for the yearly review as always.

If you apply this scaling, assassin's trophy was just as prevalent as Teferi.

@smmenen There are a variety of ways to use a related notion, https://en.wikipedia.org/wiki/Decision_tree_learning#Gini_impurity . One way would be to simply compute it for the top 8 archetype numbers.

If you have more data, say the top32 lists from every vintage challenge, you could compute it for the top 32, then top 16, and so forth, and see how much the impurity decreases as you zoom in on the winningest slice of the metagame.