[AER] Sram, Senior Edificer
This topic has been deleted. Only users with topic management privileges can see it. 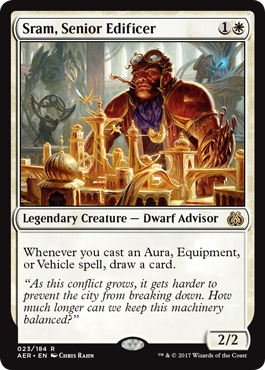 Only posting this because I know that occasionally enchantress pops up here and there as a fringe deck, and this does seem like it would be a worthwhile 2 mana enchantress. It also has the very fringe ability to trigger off Helm of the Gods, which up until now has seen no play because it is not an enchantment but at 1 mana with a trigger that softened.

So would this see any play in enchantress lists at all, even as a 1 of, or is this just going to wind up being the EDH enchantress commander? I highly doubt we see any Sram bonesaw combo decks in any format though, though the though of that list warms my heart.

this just going to wind up being the EDH enchantress commander?

Doubt it - you miss the other two Enchantress effects as well as many of the best enchanments by not allowing Green in your deck.

Maybe maybe maybe, might see play in some kind of white-carshops type thing, but really unlikely to see winning play.

First (translated) spoiler I saw had artifacts as well and I was going to call the busted siren out. This has ineresting applications, but not likely to be dominant in type I.

Sram means "I am shitting" in many Slavic languages.

@mediumsteve Confirmed. I looked up the Polish translation. I was pleasantly surprised.

This card is a really good option for some flavors of enchantress, no doubt, and probably competes with Enchantress' Presence in builds that are aura-heavy. Not triggering on Elephant Grass, Solitary Confinement, and Presence is a bad thing, though. That deck can ill afford road blocks as it ramps up. Still, his sheer versatility means he'll do well. He works in Puresteel Paladin-type decks too. I forsee nice times ahead for Sram "To Crap", Senior Edificer... in Modern, anyway. Not sure if Vintage likes this.