[AER] Ajani Unyeilding - Payin' 4WG For Ancestral
This topic has been deleted. Only users with topic management privileges can see it. 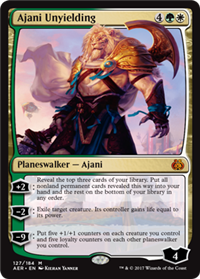 Bear with me. I realize this card is unlikely to do much due to its cost. Still, like we talked about back when Worst Fears was spoiled, it's interesting to think about how much is the upper limit for powerful, playable effects in Vintage. Six mana is a really, really, high price and its really, really bad for Vintage. However... we do actually play cards with this cost, namely Dragonlord Dromoka.

Pushing aside the casting cost for a minute, the first two abilities of Ajani are really good. The +2 ability is the business end of Ancestral Recall (best draw spell in Magic). You lose the ability to get lands in your hand this way, which hurts if you need cards in your hand generally for brainstorm or something else, but you get the gas. The -2 is Swords to Plowshares (best removal spell in Magic).

The third ability sets up poor Ajani to be much worse than Dromoka, probably. It doesn't win on its own, unlike the Dragonlord or basically any other Vintage-playable Walker. I have to imagine that you are going to be Ancestral Recalling yourself instead of making your creatures bigger. Add to that the fact that Ajani does not protect himself anywhere near as well as Dromoka, so he's probably doomed in Legacy / Vintage.

So, here's the question. In the abstract, what is the maximum we could pay for a card like this? Something that is alternatively the best draw spell or the best removal spell in Vintage?

Keep in mind - this is the NOT the Ajani we get in aether revolt. This is the Ajani that comes with the planeswalker deck. Still tournament legal and useable. But, if its anything like Chandra and Nissa were for Kaladesh, we'll have Ajani and Tezzeret printed in the set with similar abilities and a much nicer casting cost.

I stand corrected. And - Oh wow, that other one does suck.

Also, when cast Dromoka can't be countered... this is much closer to Yawgmoth's Bargain in casting cost/castability. And... way worse.

Answering the OPs question though, I'd say if Ajani costed 1GW I'd consider it.

@fsecco Yeah, I was thinking I might bid 2WG even... and maybe fit it into a Kelly Oath Build, or some sort of odd plainswalker control that for some reason is running Sylvan Library over Dack? The white/green cost is almost as bad as the six total really.

Dromoka also cannot be countered, so with mana drain mana, a black lotus, or a tolarian academy that casting cost looks a lot more accessible. And of course, the Oath of Druids thing is a reality. Only some versions of Sylvan Mentor were running Dragonlords. It's a great card, but not for it's casting cost as much as its amazing abilities.

Also where are you getting Ancestral comparison? It says put all non-lands PERMANENTS in your hand. So unless your playing dudes.dec, this aint drawing you shit. This thing is garbage in all but standard MAYBE.

@Topical_Island Even at 1GW I still wouldn't play it, probably, since its +2 only works in creature heavy decks. Maybe it would be cool in Humans or GW Hatebears at 1GW. Not anywhere else though.

Doesn't have to be used in creature heavy decks. Artifacts, enchantments and plansewalkers count.
I just think it's one generic mana too much to matter in that case.
Most decks will curve out at 4cmc. At which point any other planeswalker is favored over this Ajani.

Effects and their costs can't really be separated from each other or from game context. The mana curve very much dictates the direction of Vintage, even if it isn't explicit. Nowhere is this more obvious than the decline of Mana Drain: such a powerful abstract effect, but the classic Mox-powered combo control strategy that wants it can't use it favorably against the early threats, cheap interaction or taxing effects that sprung up around it in the last 3 or so years.

We sometimes temporarily set this reality aside to evaluate the most unique effects because they don't have many comparables. I'm thinking of certain one- or two-card combos in smaller formats, or Time Walk effects in Vintage. For the most part though, comparables are really useful.

I remember thinking about a year after JTMS took over Vintage that the right way to have looked at it at the time was a weaker but easier to facilitate Necropotence, which the combo-control strategies at the time salivated over. Nowadays this analogy breaks down in many ways, mostly because less blowout effects like Tinker, Key/Vault, etc. are being played. As a combination quality/removal engine, the Mind Sculptor tends to come down too late in a lot of matchups compared to e.g. JVP.

Back to Ajani: as above, the gold standard for quality/removal is JVP. It is really hard to justify going up the curve much further if what you want to achieve is multiplexing removal onto your value engine, since a Swords alongside JVP costs just 1 mana on both the front and back sides. The premium I currently pay to get more value is 1 mana to upgrade to Dack (in Gush aggro shells against control opponents) or maybe 2 mana to JTMS (as the upper end of Oath combo-control). But I wouldn't play Ajani over either of the above unless I really valued having direct (instead of incidental) access to the Swords effect. And if that was the case I wouldn't pay more than two mana, because in this metagame if you can't access your Swords effect on the second turn you might as well not have a Swords effect. The only exception were if I playing a control deck that really valued a fifth and sixth copy of Swords for late game TKS/Smasher. Then I might swallow playing 3 mana; but in such a deck would I even get much out of the +2?

In sum: no more than two mana in the current metagame.

@ribby When you said the gold standard for removal was JVP, did you mean JTMS? Baby Jace can't remove anything without help from other cards you drew.

@MaximumCDawg I did mean JVP. In the current environment either one of JVP's backside abilities is effectively removal in many common game scenarios. -2/-0 on Thalia does a lot to advance Pyromancer-based game plans. And rebuying Bolt does require you draw Bolt, but e.g. Delver is kinda designed such that this happens a lot.

No this definitely is not good enough for Vintage. Shouldn't have made this thread.

@desolutionist Yes, it has been a great day for us to learn, my brother. Now, we know not to make threads about 6cc walkers. @fsecco I'm actually disgusted that they keep printing planeswalkers matters cards. Next we'll have "search your library for a mythic rare card and put it into your hand."

@Water0 It's totally different. Mythic is not an in-game information, whereas Planeswalker is. I don't mind this at all. I wonder if we'll ever have an ammount of effects like that where PW superfriends can be a thing. It's possible it will be in Standard, since they seem to be pushing that. But I'd be very glad if Vintage Superfriends was a thing (and not that Narset Moat control from months ago).

I'd say Heart of Kiran is a good card to go in that direction.

@fsecco Heart of Kiran is a mythic rare that has an ability that only cares about mythic rares. This might not be the best place for this kind of discussion, but printing mythics (especially obviously pushed ones) that care about other mythics is a very, very bad direction to take this game.