[SOI] Hermit of the Natterknolls
This topic has been deleted. Only users with topic management privileges can see it. 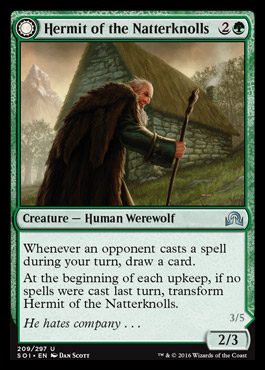 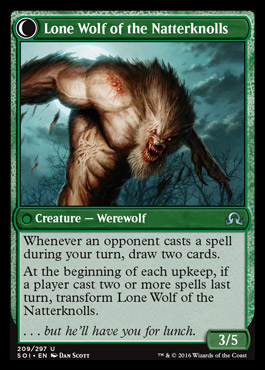 So, this guy can really draw cards against permission and instant draw spells. I guess the main problem is he's useless against MUD and probably against storm combo too. I guess he would be better if the transformed side was 5/3 instead...

But I guess this was the only card from the last batch that was slighhtly interesting. Thoughts?

It's a 2/3 for 2G that your opponent can play around successful, and you need to force interaction in order to actually transform it; AND it's transformation doesn't do anything different.

The second-most playable card in this set after Thing in the Ice is the amazing card 'Island'.

The card has some potential against control decks, but my question is: in which deck do you want to play this? If you really want to limit the opponent's spells during your turn, just play Dosan, Grand Abolisher, City of Solitude, cavern of souls... With this card you are giving the opportunity to choose. However it's easy to flip, but still it's a 3/5, which is not going to impress your opponent.

Also if your opponent plays notion thief or sphinx... you are giving him the game.

Why would I play this instead of Mystic Remora?

@Soly Dual Shot has a decent chance of seeing play. {R} gets you 1 damage to each of up to two critters at instant speed. Anguished Unmaking and Asylum Visitor also fail to be awful.

@AmbivalentDuck I feel like both of those fail to be playable in vintage; welcomed to be proven wrong however.

But I also like Anguished Unmaking. Instant speed is important. I just feel it's a little slow for our current meta.

@fsecco its a solid 1 of, but white and black already have good spells that take that spot depending on meta

@Soly Anguished isn't awful even if it's never great. Abrupt Decay has certainly seen play even though it doesn't exile or hit 4CMC+ permanents like Jace and Lodestone Golem. I think the bigger problem is that you don't often see black and white in the same decks right now. I'd bet on this seeing play if it were 1WU or 1UR.

Asylum Visitor may eventually find a home in a madness deck. Some past printings are pretty ridiculous madness enablers. Eg. Bazaar. It wouldn't surprise me to discover that some variation on a madness deck had become Vintage viable.

Also, I'm pretty sure that Dual Shot will see play in Legacy. I'm not sure if it will see Vintage play, but the instant speed 1 CMC 2-for-1 is hard to ignore. If nothing else, the effect is brutal against ELVES!!!.

Even though it's a Sorcery, Forked Bolt is probably enough better than Dual Shot to consider the latter unplayable. The difference between Instant and Sorcery is largely mitigated by only costing one mana.

As per the OP, the werewolf reminds me a lot of this card:

While there are a ton of obvious differences, I imagine the majority of decks that would want to play the werewolf would want the Storyteller even more, and the Storyteller is basically unplayable. It's not a perfect comparison by any means, but the Storyteller seeing virtually no play is a good indication that this won't either. And as other have said, if you want to punish your opponent for interacting, the cards that prevent it altogether likely accomplish your goal even better.

@Nefarias Hermit is a human and requires only G to be played. Those are advantages for the kind of deck that would want to play this kind of card.

It only copies a spell you control, so it fails on acting as Misdirection does....

It only copies a spell you control, so it fails on acting as Misdirection does....

Assuming a counterspell war, you can copy an own fow, for example. Not great with fluster, but reb, misstep, misdirection... are nice choices.

I know, but I'd love if this card could count as a counter for counters on your graveyard... Maybe that would be too busted... Leaving 3 mana open would discourage opponents from playing Recall, Dig, etc, without double backup.