Kambal, Consul of Allocation
This topic has been deleted. Only users with topic management privileges can see it.
S
S
Saya Reply Quote 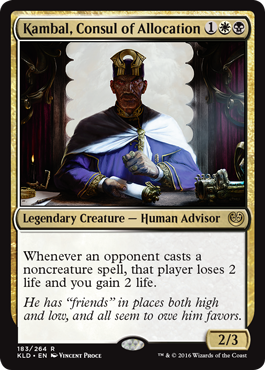 This card seems very strong in a number of matchups, particularly Gush-based decks and Storm. I will admit to not being the most knowledgeable of Humans strategies, but this card seems like it should fit in well, assuming the mana works out. Legendary is also a bit of a drawback, but you're probably only running 1-2 of these anyway given the cost and the need to cram in all the other good Humans into your deck.

Oh look, another human hate bear. Didn't expect to ever see one of these again. sigh. Couldn't they put this effect on something other than a human?

That said, this card is pretty good aside from the 3 cmc and need for black mana (not really much of a draw back though).

This is getting out of control. Asymmetrical, so you can still play your instants and sorceries. resistance of 3 to skip massacre. At least there are lots of decks that are little affected, so it won't be a 4x in maindecks, but it's awesome against gush and storm decks.

Good thing I didn't waste money on Foil Scab Clan Berserkers...This is the second one sided pyrostatic pillar on a stick we have gotten recently, and this one even nets you life in return with 0 drawback; At least berserker needed to be renown. Legend or not, I would expect to see this in all Esper Sideboards and should get heavy consideration for Mainboard in 5C Humans. The B/W requirement is (to me) barely even a consideration in any list with 4 Cavern's. Even Eldrazi Lists on Cave of Koilos could find ways to fit this in.

The article on wizards.com that introduces this guy is quite interesting:

I'm sinking into my chair, shoulders slumped, trying to avoid looking at the battlefield. All eight of my lands are tapped. My hand is empty. I have a sickening feeling that none of my creatures are going to survive until my next turn.

Across the table from me, my opponent is going off. "Let's see, I cast Serum Visions, scry both cards to the top, draw two off this Divination, kill both your Demons, exile my graveyard to lower the delve cost on Dig Through Time...”

My opponent is playing Magic, and I am not. It is one of the worst feelings in the world.

This card is nucking futs and will go into all manner of Vintage decks. I'm kind of annoyed too. I'm glad non blue decks are getting a boost but this card is a little ridiculous.

Set your Cavern of Souls to Advisor, add in Gaddock Teeg and Leovold, throw in some Pillar of the Paruns, and you've got yourself a stew.

At this point, I basically feel obligated to finally acquire some Caverns.

@thecravenone You may want to wait and see if it makes it into MM3 first.

I was already brewing WB hatebears with Bob and Sin Collector, but this is definitely replacing something. I'm sure @BazaarOfBaghdad will come up with something first, but I'll be trying.

I'm worried that at this rate vintage will just be white based non-workshop prison decks dorking it up against each other that steadily become more and more inbred with mirror match cards.

This + Karlov is amusing. Bad, but amusing.

@Cambriel In addition to the Tribal Advisors hype, with your engine assembled he helps to kill a third of the tokens Monastery Mentor makes!

I was already brewing WB hatebears with Bob and Sin Collector, but this is definitely replacing something. I'm sure @BazaarOfBaghdad will come up with something first, but I'll be trying.

Kind words, thank you. I hope you get something out of this (and this is probably better than Sin Collector). Nevertheless, I don't think he's good enough compared to other options. Against some decks, he's plain terrible obviously. He doesn't cut it vs. Oath. He's prone to opposing Karakas. And even where he shines, I'd probably rather have 2-drops like Thalia, Ethersworn Canonist, or Labyrinth. Not to mention the competition at the 3-drop slot like New Thalia, Queller, Eldrazi Displacer, and the new Conspiracy hatebears. 3-mana and an additional color (often the third) is not unsurmountable, but at least an issue.

Unlike Bob, he doesn't address a weakness in the Hatebears strategy. When he shines, he'll be really great, but yet the other options will usually get there as well in the end. I think this is, while not unplayable, a poorer option than what currently exists.

Yes, this card is seemingly very powerful, but it doesn't actually synergize very well with many current hatebear strategies. Thalia 1.0 and 2.0, Sanctum Prelate, Gaddock Teeg, Spirit of the Labyrinth, Stony Silence, Leovold, Strip effect etc all want to prevent your opponent from playing cards, while this punishes him for doing so. That said, I think this is a strong card and it will see play but probably not in prison style hatebear decks.

obligatory sigh from a storm player

The issue with this guy is that most hatebears say "YOU CANT DO THAT" like Thalia or Leovold. This guys says you can do it, you will just regret it, which is still good but less powerful.

Where as Thalia will prevent tinker into Blightsteel for instance, this guy will make them pay 2 life. There are some other situations where this comparison is apt as well.

I think his saving grace and the reason he may see play is that a lot of the bears who do similar things are already legendaries, so having this guy allows you more threat diversity.

I think this might be a sideboard card for non-hatebear Esper decks (if those exist). It punishes storm, gush, or any decks like belcher that want to vomit a bunch of artifacts out.