[KLD] Aetherflux Reservoir
This topic has been deleted. Only users with topic management privileges can see it. You know, I understand this is an EDH/Joke card, I cant help but feel it is a staggeringly powerful card. Let's not look at the wincon for a moment and just focus on the life gain. In vintage where you are casting and cycling a ton of spells all the time, you are going to gain a ton of life. The gain increases for every single spell, which means you are gaining 1, then 2, then 3, etc.

With cantrips, Gushes, Gitaxian Probes, Ancestral, this card can very rapidly gain you a lot of life. Functional this works in storm decks pretty well, and could be its own belcher type of thing, except without the hatred of land cards. It also works on your opponents turns so it can mess up combat math which is actually becoming more relevant with creature decks being front and center.

Now the Pay 50 life thing is excessive, but I can easily imagine times where you will hit that number in vintage. If your opponent is trying to kill you with blightsteel or has an all at once strategy, you basically only need to gain 31 life to win. 8 spells in a turn will do that from starting life, assuming none of the other spells gain you life or lose it.

(reposting from my own thread which was improperly titled) 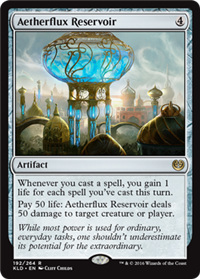 This card is an artifact with a reasonable casting cost.
It buys you MASSIVE time against any aggro based deck if you're not locked out.
It comes with its own win condition.
It can be built up over several turns to win, which is kinda hard to do outside of Zuran Orb + Crucible shenanigans, or you can storm out with SLIGHTLY more storm count than Tendrils to win that turn.

Now, the bad news. Since it's an artifact, it gets hated out by all the anti-shops tech people are running. It's expensive and not synergistic with what Shops is trying to do usually. Maybe cute in the mirror. Tezz, the other deck that runs artifacts, probably would just prefer to win with Vault Key if the opponent is letting them activate artifact abilities. These may be insurmountable flaws.

Unless someone is pressuring your life total, 5-7 spells is enough as you gain the cumulative life on each spell. Starting on 15 life, you can "storm" 6 cards for 56 life and be on 71 without any of those cards actually gaining you life. You can also go off on multiple turns to get there but it's a bit harder though you're still only using the single source as a kill instead of a second copy of tendrils or a YWill/regrowth to reuse the first copy. Having multiples in play is obviously better.

Now you just have to protect it.

Yeah, but I think you can't assume that people won't pressure your life total in Vintage, particularly if your game plan is to deploy a 4 casting cost artifact. What I like is that, even in that circumstance, this card is absolutely fine. It buys you the time you need if you deploy it against creatures. It easily races 2/x bears, and even slows down 4/x beats significantly.

EDIT: Not that anyone would do this, but note that casting Illusions of Grandeur gets you almost halfway to the kill.

If so I think this may actually be the new belcher.

I mean, we do get into this argument about this vs tendrils, vs belcher and which is better, but considering this card gains you life the way up, unlike tendrils which only does it when you resolve, I think this may actually have applications that make it better in some matches.

@Protoaddct It's so much easier to hate, though.

You start at 20 so if you cast this first it's just 8 spells right? Seems very Belcheresque with Gitaxian Probe, Manamorphose, etc

Also you get to run as many land as you like

I think you misunderstand. If you cast 6 spells in a turn you get 21 life, not 56. Pretty trivial math.

I think this will have a deck to play in. I can see it as an alternate win-con in storm, in a draw-7 based deck like SCV or spawning a new deck all its own that is very storm like. Whether its seriously viable or more fringe is the bigger question.

If you pay 50 life to kill someone, you'll be an easy prey to the other players.

...or Sydi as your Commander, which allows you to give the Reservoir Lifelink and kill all the things.

I think this card sucks, but I gotta say that the interaction with Paradoxical Outcome is quite sweet and I can't wait to deal 50 damage to an annoying Thought-Knot Seer.

With this out on the field, you can cast instants, responding to all of the triggers without letting them resolve. If you do that, then the spell count goes up before they start resolving. Which means...

In other words, this SQUARES the life gain if you hold priority.

There is no way they intended for it to do that, but oh well, even better I guess. All that means is this thing can get you to 51 faster than planned. I could easily imagine turn 1 turns with this, similar to Belcher.

I think the real question becomes do you play it red storm style, with rituals and cantrips just providing velocity into a win, or wheel style where it is empty hand / Refill.

I do like that this card basically stores your storm count in a why, since life does not reset on its own. It means you can go off, eat a poorly timed counter spell, and still potentially start up again next turn closer to where you need to be.

The "square" behavior is tempered by the fact that you can't let your cantrips resolve or you exhaust some of the triggers. That is, if you want to maximize your gain, you need to have all your instants in your hand to start with. Otherwise, some will square, some will not.

Basically this card is an accounting nightmare

EDIT: As an aside, it seems like the Johnny-combo cards from Kaladesh are pre-selling really low. Like, 1 - 2 bucks a pop low. That's really cool!

I don't think this is as fast as belcher, but this is not so all-in. In fact it seems a decent alternative to tendrils in storm deck. You don't need to gain all the life in the same turn, and if you want to commit to life gain strategy there are lots of cards that help (somebody reminds the Illusions-Donate deck?).

Belcher is a bad card itself, however some fool from Ohio turned it into a real deck (well done!). Maybe another fool finds a deck for this card. Doing 50 damage to your face must be priceless.

You kinda do, though, since using this guy over multiple turns makes it dramatically worse at gaining life and gives your opponent chances to whittle you down using dorks. I feel like you want to hold your spells for a big turn except as necessary to stay alive.

Now, deploying your hand in advance of a Yagwill coming in a few turns seems like a fine thing to do, though.

I mean, the nice thing about this is if you fail you do not need to restart in many cases. Let's say your opponent waits until you are at 49 life with a spell and trigger on the stack and then they destroy this. You do not need to suddenly re-storm your count all the way back up, just get one of these back into play. It sorta feels like a tendrils that also helped you contribute to its storm count.

Also, this thing is/can be a trump for tendrils because of how badly it can screw up the math. How much storm count does a storm player think they need with one of these on the stack, just to have your opponent float a counter spell and a brainstorm and suddenly make you need a bunch more?