[KLD] Chandra, Torch of Defiance
This topic has been deleted. Only users with topic management privileges can see it.
?
?
Guest Reply Quote 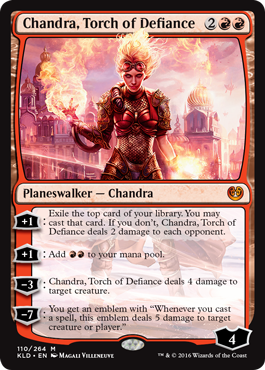 i dont know why she has float 2 red as an ability but 4 mana playable chandra really soothes my yearning for a plyable chandra.

She passes the Thought Knot Seer Test.
She generates CA, and even if you don't cast the card you get advantage.
She Ramps you manawise, if you need it.
Her ultimate should end the game very quickly.

I don't think she's playable, but I'd love to see you guys have success with her. Good luck!

2RR is definetly castable, no problem at all, a lot of big Jaces are cast by 2 volcanics anyway so there is no problem getting her out in a UR shell.

+1: This first +1 ability shines as soon as the board is clear and there are no threats on the board. starting with 4 loyalty this goes quickly to her ultimate and provides a clock and card advantage. She passes the "Cantrip" test. Also its pressuring opposing walkers and killing them in time.

+1: The second +1 ability might be the least useful of them, however if you have 2RR open and can cast this on an empty board ad RR and slam a Young Pyromancer right behind that, that's incredibly powerful. If you don't have a followup play you can always just use her first +1 ability. If you do have a followup play, essentially casting her for just 2 mana seems awesome. On later turns this will ramp you, however im not sure how useful this is, and if you are not just using her first +1 instead most of the time considering you already have 4 mana. If you cast her turn 1 of a land and a lotus, this ofcouse is quite awesome providing you with enough mana to stick threats.

-3 This is the obligatory "does it protect itself from creatues?" test and she passes it. If there is just one creature on the battlefield this most likely just kills it. -3 is a lot, making you wait 2 turns to use this ability again (from a 4 loalty starting point) and even then she dies. This is probably a 1 time use in the average game.

-7 Well its an ultimate, and how every good PW ultimate it will win you the game 90% of the time you get to use it. Considering you probably used her first +1 some amount of times to get to this point 2 spells after using this ability are sometimes enough. Not much more to say about this.

No to the obligatory: But is it better than Jace? Here the comparison is not far of of course. Both are 4CmC walkers, both have 4 abilites. Both have a way to handle threats on the board and generate card advantage.
My take on this is: Jace is better in a very blue meta game, this is better in a meta game playing more creatures. Jace has the way better card advantage and digging abilities, this can handle creatures probably better (im not sure about that since -3 seems still harsh to me, but at least its a permanent kill and not a bounce) and she is a more direct threat/win condition. Not that a Jace that sticks doesnt win games on his own, but this accomplishes this probably quicker, especially in a Delver/Pyromancer Shell pressuring your opponents life total anyway. You dont have to ultimate this walker to win.

I like her, seems playable. I can definitely see her in a Pyromancer list that tries to end thing quickly.

I could see this in Charbechler if needed for a long game plus creature removal. Christmas Beatings as a way to get mana and generate card advantage. Storm Combo for the ultimate, way better than a Tendrils of Agony.

Though obviously uncastable with workshop, this may be cool in a mono red Uba stax list, with the first +1 being like an Uba'd card with an optional shock, and the other +1 helping you fuel out cards exiled to Uba via Bazaar.

Now you can exile your eldrazi and get them back in your hand with the new Eldrazi Wish and get to do 2 damage. Tech. UR Mist Griffin Chandra ftw?

Storm Combo for the ultimate, way better than a Tendrils of Agony.

I disagree, Storm decks are not designed and equippet to play a Planeswalker and defend it multiple turns until the ultimate happens. At the point the ultimate happens most decks should not have a problem activating it enough times to win, you dont need a dedicated storm list. This card is not playable in a typical Storm list since it goes for a very different style of play.

This card seems good... but... I'm on the fence about Vintage. Wizards seems to have realized that four mana is not too little for a good planeswalker anymore. It's probably playable, I think, in the sense that you wouldn't be embarrassed to slam it.

Thinking about this for a minute, let's see what she does. Depending on when you deploy her, she can either:

I mean... those are fine things to do; heck, burning creatures has never been so relevant. Even so, I'm having a hard time seeing her stack up to even something like Kaya or Narset, let alone J:TMS or Dack.

So, the burn ability is fine, but it puts you down a whole turn to do it, usually. The fact that this Planeswalker is removal when you need it is almost a base line for playability.

The mana ability is awesome if you've got a Pyro in your hand, but how many board states are won by holding on to your Pyro until you hit 4 mana so you can deploy both in a single turn? Wouldn't you run out the Pyro first unless something goes wrong? The fact that she's making RR means you're not gonna be cantripping off of this with a Preordain or anything. When you untap, sure, you're up some mana, but you started at 4 + sphere effects already.

Exiling cards from your topdeck is probably also a bad thing to do right away, since you're unlikely to have mana to cast it immediately if you just spent 2RR. On subsequent turns, sure, you can dig, but you have to cast the spells you find proactively. Counterspells get exiled. So, it seems like an ability to use when you're already ahead and don't need to disrupt your opponent.

Overall, I think this card is great and amazing and all that jazz but I have a hard time seeing how its abilities work in a Vintage metagame. I might be wrong...?

We've now seen several of these red "draw a card except wait exile it and you have to play it right now" cards and I think zero of them have actually been playable?

We've now seen several of these red "draw a card except wait exile it and you have to play it right now" cards and I think zero of them have actually been playable?

I think this would just need a different build, maybe something with Monastery Swiftspears and 4 bolts plus maybe chain lightnings? To make use of the RR ability. Also works well with Manamorphose and could this not find a place in Painter/Grindstone builds allowing you to drop combo pieces for free with mana backup for rebs bolts etc etc.?

I look forward to testing this in Blue Moon. Too often 6 mana Chandra was just stranded in hand.

Wow this card seems good, all 4 abilities are relevant and complete themselves into a nice and flexible package. Based solely on the text of the card it definitely seems like it could be a player.
However, in my mind the real challenges for this card are: A) is 2RR a playable casting cost for a pwalker in vintage (double red mana and doesn't pitch to fow)? B) Knowing that Jace the mind sculptor exists, why should I play this (especially considering that even Jace doesn't see a whole lot of play anymore)?
Obviously I'm assuming It would go into a blue control deck, but I don't see how it would fit into anything else...

If jund could be a Vintage deck, this could give said deck card advantage while shutting down opponents with chains of mephistopheles

Wow this card seems good, all 4 abilities are relevant and complete themselves into a nice and flexible package. Based solely on the text of the card it definitely seems like it could be a player.
However, in my mind the real challenges for this card are: A) is 2RR a playable casting cost for a pwalker in vintage (double red mana and doesn't pitch to fow)? B) Knowing that Jace the mind sculptor exists, why should I play this (especially considering that even Jace doesn't see a whole lot of play anymore)?
Obviously I'm assuming It would go into a blue control deck, but I don't see how it would fit into anything else...

A) From my experience with Sylvan Mentor (and other various Gush builds), Gush makes casting XX spells much easier. Float R, Gush, replay Volcanic and presto, you have RR. She's actually probably easier to cast than Nahiri since you can do this with a Volcanic Island, a Basic Island, and a Mox. From my experience with Blue Moon, it is actually easier to cast a RR spell than a UU spell under a Blood Moon. You typically run 6 Basic Islands and 10 "Mountains". These are the two decks I that I envision Chandra being used in.

B) As for why this card over Jace, Pyroblast and Leovald (can't Brainstorm, bouncing him/fatesealing gives opponent a card) are two cards I feel are going to be quite prevalent and influential in the emerging metagame and Chandra is much better against these. I would also rather have Chandra against TKS as bouncing it multiple times is not the best solution.

I think we've past the all or nothing "Jace Test" when it comes to evaluating planeswalkers. When factoring an empty board and at parity with your opponent, Jace will likely win every discussion because of how flexible the card is, however, that scenario is hardly every encountered these days with so many creatures running around and Cavern of Souls generally making creatures more reliable versus Blue decks. Once you start factoring in more common scenarios, Jace is less appealing. Chandra 17.0 (how many of these things have they made already???) has some things going for her. She can remove just about every creature in the format save for roided up Ravagers/Hangarbacks/Trikes/etc., Smashers, and Tinker/Oath fatties. She does have some semblance of card advantage that doesn't use the word "draw" (again, in a Leovold, Notion Thief, and Spirit of the Labyrith world is not something to scoff at) and last I checked, Sol Ring was pretty good. Yes, adding RR at sorcery speed isn't the same as <><> at instant speed, but it is colored in those few instances where that would matter, and is unaffected by Null Rod/Stony Silence. Her ultimate is generally going to end the game quickly. Only thing I hate about this card is that my 6 mana Chandra is now useless.

With Mass creature removal not being super popular right now in mainboards (save the occasional Supreme Verdict or Engineered Explosives) the ability to Ramp red mana seems relevant if you are trying to push through Bolts, Wear/Tear's, Fire/Ice's to help clear a board in game 1, especially through spheres. Floating RR in a critical spot can also help play around flusterstorm.

I think people in this thread are underestimating the mana ability. This card could make cards like Jokulhaups and Wildfire playable assuming inclusion of something to make them un-counterable. I think this is the best planeswalker since Dack Fayden.