Monarchs in Vintage
This topic has been deleted. Only users with topic management privileges can see it.
E
E
evouga Reply Quote

Is the exchanging of the crown a non-optional event? I couldn't imagine a situation where you would not want the crown (notion thief in play aside..) but just curious. There is currently no way to interact with emblems (right?) , and the way the article from wizards reads there will not be a way for there to no longer be a monarch once the effect begins.

It's definitely an interesting mechanic, and as long as there are cost effective ways to get the effect into play in vintage I expect it to see some play. This, plus library, plus Bob, plus gush is card advantage to the max.

Is the exchanging of the crown a non-optional event? I couldn't imagine a situation where you would not want the crown (notion thief in play aside..)

I think this is a great mechanic, but I don't Marchesa in particular seeing play -- first, there's the extremely awkward three-color mana cost, and second, 3/3 haste deathtouch is just not that exciting in a world of endless Monk and Elemental chump blockers.

Now if they print a cheap blue sorcery or flying creature that makes you monarch, we'll be in business.

So far we have a 3B 1/3 creature with deathtouch that gives you the hot potato (and we should continue to call it that) when it CITP. I reasonably do not expect we will see another creature cheaper than that what will give you the potato, unless it has some horrific drawback. I don't think a sorcery is out of the realm of possibility, considering the premium draft formats put on creatures and how this mechanic interacts with them. A sorcery in draft would probably be bad enough to not be played.

I think a sorcery would wind up being broken in vintage though, especially in blue. If it costs 2 or less we may very well see the whole format start revolving around the meta game of potato passing. It would almost be reminicent of old turbo fog or phyrexian arena decks, where your just hardcore drawing and playing whatever to prevent the advantage from every going away.

Calling it the "hot potato" implies you DONT want to hold onto it, though.

I'm on board with what feels like the consensus in this thread. Monarch seems very powerful/useful ... but no cards spoiled yet seem to give it to you for a reasonable cost.

I don't think it's super hard to build a deck that keeps Monarch once you get it - there are tons of great creature-handling spells whose primary drawbacks are completely mitigated by drawing an extra card each turn, and these aren't bad cards to have now anyway.

It feels like they're costing this at +3 mana over what the card would have to cost in vintage otherwise? I don't know if we'll see this on a card we can use.

I think anything, and I mean literally anything, that puts in into play for CMC 2 merits serious consideration. Black seems like the color that would get some sorcery that was BB Pay 2 life: get the thing.

Calling it the "hot potato" implies you DONT want to hold onto it, though.

So the dude who designed this mechanic is James Hata, a dude who I know very well. I used to play UFS with him and we were on the world championship team the first year of the game.

I remember in UFS there was a card from the Penny Arcade set called The Watch, which ties back into the comics about Gabe and Tycho fighting over a watch. The watch card had a very similar effect where it gets traded back and forth because of combat. When Mike and Jerry from Penny arcade designed a card in M15 it was this:

All I'm saying is perhaps the watch is better. 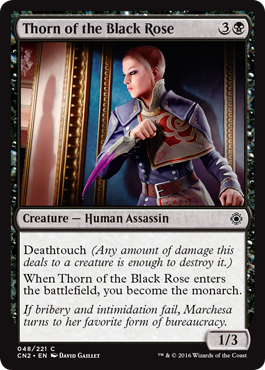 This is probably the easiest way to become monarch that we'e seen so far. In a deck that wants to become monarch, are Marchesa's other abilities relevant enough to justify the more difficult casting cost?

Let's wait until we see something at less than 4 mana with this effect, plz.

What's up with the weird change of 221 cards from 220 on the product page website?

Also, apparently, this set comes up this month. I assume it's legal in Vintage upon release, unless there are conspiracy cards, which would probably be banned.

What's up with the weird change of 221 cards from 220 on the product page website?

Also, apparently, this set comes up this month. I assume it's legal in Vintage upon release, unless there are conspiracy cards, which would probably be banned.

Brago was murdered by Kaya, so his card is not in the set anymore (I'm not joking).

I just want them to spoil a 4 CMC artifact that makes you the monarch.

It won't be available on MTGO in any case so unfortunately some of us will just have to wait for any playable cards to show up in a future masters set.

Meh, I really don't like this kind of design. All the cards revealed so far are probably not good enough but I think it's detrimental in the long run as the potential for it to be broken is quite high. Doesn't seem worthwhile for WotC to take that risk in a supplementary set targeted mostly at the multiplayer crowd.

Based on what we've seen so far I'm going to say Monarch sees very little play in vintage. Its not that the ability is not vintage viable - drawing an extra card every turn is always nice. But look at what we have so far -

That's 4 and 5 mana. I can think of a lot of things to do with 4 and 5 mana to just win the game. Outside of a humans deck I don't see anything yet that would justify playing this mechanic. Cost is just as important as effect in Vintage.

@cYnic: WotC simply does not care about the effect the set will have on Vintage. Conspiracy is firewalled from Standard constructed and Standard limited, the two formats that sell packs; if Conspiracy turns out to have a deleterious effect on eternal formats, they will fix it with bans/restrictions.

@Khahan: Does it really have the potential to be broken, though? Monarch is already available at the relatively cheap cost of 1BB (Phyrexian Arena) and is unplayable at that cost. Arena is even better than stealing the crown, actually, since there is no risk of a random blowout to an opponent with evasive creatures.

@evouga Arena can be destroyed, this is persistently in play once it comes up.

Likewise there is no life loss with this, and while that is often not relevant, it is important.

Arena costs 3 to get you cards over time. We have seen in the past cards that cost more can be played if they provide suitable value, and I gotta be honest a 3/3 haste deathtouch that generates tokens if this every gets stolen seems like good value. The only issue with it is the casting cost requirements. If she costs 3U or something we wouldn't even be having this conversations right now, she would just be flat out amazing. So I think there is still potential here.

Well its not a artifact but it doesn't stick in you're hand if you don't have the mana yet.

It looks increasingly definitive that there won't be any way to become the Monarch for less than four mana. Which is a pity, as none of the monarch enablers seem very playable so far -- the land is the closest, maybe in some kind of Landstill list.

It just seems like such a swingy an dangerous mechanic -- against Mentor and Pyromancer swarms, Hangerback Walker tokens, Reality Smasher, etc etc, these cards give your opponent a free Library of Alexandria...

I feel sort of relieved that, as far as we know, there is no Vintage (or Legacy) playable card with Monarch. This new mechanic can be interesting and most probably quite fun in slower format like standard but in competitive eternal format i fear it could change too much the nature of a duel. Even if it is not the same, remember how playing with a howling mine quickened the games back in the days. Whoever is the monarch, drawing more cards just means more potentially décisive effects to be played. For me it sounds like an armageddon clock that would say "hurry up , hurry up, this game is going to be finished very very quick", i don't think we need that in Vintage. The biggest problem i have with it, is that there is no way to remove that embleme once it started. Maybe i am wrong, since i obviously never played any game with Monarch but that is how i feel it.

@albarkhane im feeling relieved as well. The default for getting control of the monarch beeing creature combat doesnt sit well for me at all.
You are forgetting about the best removal in the the history of Magic, that can even get rid of the monarch: Karns Ultimate