[EMN] Lashweek Lurker
This topic has been deleted. Only users with topic management privileges can see it. 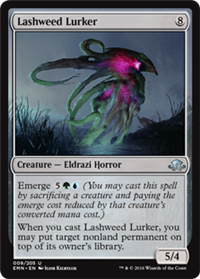 While I do not think this card will see much play, if any, it does function in a similar capacity to World Breaker which has seen play in that it can remove moat or ensnaring bridge from the table so eldrazi players can alpha strike. It costs more mana for a lesser effect and lesser body, but costing strictly colorless mana is an advantage for the totally colorless build not having to splash green.

8 mana is a lot though, so probably not going to see play. I have found some circumstances in the past where putting a card on the top of the deck and therefor preventing an opponent from drawing an out to be better than purely exiling, but that seems corner case enough that it probably wont be relevant.

I still have high hopes for a breakout card with the Emerge mechanic.

Yea I'm waiting for that big monster I can free cast turn 1 off allosaurus rider, but I may be waiting for some time.

Yea I'm waiting for that big monster I can free cast turn 1 off allosaurus rider, but I may be waiting for some time.

Yeah, I am pretty sure you will wait forever though, because the cost reduction is based off the Converted Mana Cost, not the Mana Cost. So, unless they make a pure colorless Emerge guy, that's not going to be possible really.