[EMN]Tamiyo, Field Researcher
This topic has been deleted. Only users with topic management privileges can see it.
S
S
Saya Reply Quote 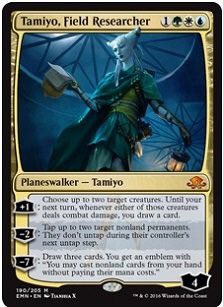 Tamiyo, Field Researcher
1GWU
Planeswalker - Tamiyo
+1: Choose up to two target creatures. Until your next turn, whenever either of those creatures deals combat damage, you draw a card.

-2: Tap up to two target nonland permanents. They don't untap during their controller's next untap step.

-7: Draw three cards. You get an emblem with "You may cast nonland cards from your hand without paying their mana costs."

For first ability,we draw up to 2 cards,which is even better than Jace's [0].If you control no creatures,just choose those opponent control so you are still able to draw or just save tamiyo and increase her loyalty.

Second is especially good in vintage since it will bind moxen to lock opponent there.but its exhaustion of loyalty is high.

By The ultimate ability,you gain not only the emblem,but also 3 draws and perhaps win immediately by playing those cards for free.

Acceptable cost, an average loyalty and useful 3 abilities.I think she is vintage-playable.
how do you estimate the new Kamigawa planeswalker?

The abilities don't really have much synergy in Vintage. They require you to have a bunch of creatures to gain value. The ultimate is pretty unspectacular in a Vintage deck full of creatures (think Bant/Noble Fish) since playing a Goyf or bears in the late game is probably "win more". In Vintage, you'd want the ultimate to basically act as Omniscience, but a deck like that would have minimal creatures. Yes, you can target opposing creatures, but that's not going to keep Tamiyo on the board.

The second ability has usefulness as mana denial (on Moxes) and as an anti-Oath tech, but it's pretty unspectacular to get only 2 uses out of it.

At the end of the day, Jace is still going to always be a better option and is easier to cast.

Agreed. The second ability needed to be at least +0 for this Planeswalker to have any shot at Vintage play.

I don't think this card is playable in any format, including standard.

I don't think this card is playable in any format, including standard.

I thought GWU with Collected Company was a super-popular color combination in Standard? If so, it's not unreasonable that this card could see play -- as long as you control 2+ creatures, you guarantee yourself at least 2 cards drawn per turn.

I don't think this card is great, but I wouldn't count it out. I could imagine playing this in a controlling deck with DRS/Noble Hierarch and maybe Vendillion Clique . Also Bant planeswalkers sounds like a lot of fun to play, even if it isn't a great deck. I think the protecting itself mode of the +1 ability is actually more interesting than attacking.

Gush and Mentor still 4-ofs in the format? The types of decks you would consider playing this in are not contenders. If Gush and Mentor do get restricted, that opens up a Bant Fish list similar to what Brian Kelly was playing during his transition from Mayor Humans to Kelly Oath - this card is a welcome source of card advantage in that deck as well as a tempo play and short-term answer to Blightsteel and other problem permanents.

I think people are a bit dismissive of the -2 ability...it makes it much easier to tap out for her if you can hobble your opponent for the next turn. Still, this card is unplayable in a format with four Mentors and and four Gush, and fringe playable if other decks are limited to one of each.

@ChubbyRain even with the card draw of the plus one, why not play edric for one less mana?

I think this card is great but I doubt that it will see play in Vintage while Gush is unrestricted. I do think that it will be playable in both Standard and Modern, and I imagine that it would be quite good with True-Name Nemesis and Stoneforge Mystic. I wouldn't be surprised to see this in Legacy

Because Edric dies to common removal, this protects itself, provides CA, and is hard to remove.

I'm not sure you actually get to draw 2 cards with her +1. The way I see it, if both creatures deal damage at the same time, you'd draw 1 card only. The only way to draw 2 would be one of them having First strike.

Ultimate is awesome, but otherwise pretty meh for vintage. Would really have to be some bant humans/fish build to take advantage of her. Even still those are normally rocking thalia which is a nombo with 4cc planeswalkers. She is powerful in the right shell. I just dont know if said shell can succesfully exist in vintage. Will certainly see standard play with fringe modern play

I'm not sure you actually get to draw 2 cards with her +1. The way I see it, if both creatures deal damage at the same time, you'd draw 1 card only. The only way to draw 2 would be one of them having First strike.

It draws two. Says either, so you get a trigger for each

What about some form of Walker Control deck with Walkers that make dudes (Gideon, Ally of Zendikar or Elspeth, Knight Errant ring a bell). Then we could run that newly spoiled card that looks at top seven and puts walkers into play? It's a stretch, but I think it would be a blast!

Looks like this card is being tested out. From a 3-1 DE on Aug 5th, this decklist includes two copies of new Tamiyo:

I was initially skeptical of Tamiyo breaking in over Jace, and to a lesser extent Dack (different colors, and different effects), but I'm starting to open up to her. To be clear, you draw a card for each time one of those creatures deals combat damage. So, two creatures deal combat damage = draw 2 cards. If one has double strike, you draw two cards for that double striking creature. The -2 is a good stopgap to protect herself, though it won't last forever. Drop her behind a Moat, like TR33FIDDY did and suddenly she becomes a real threat to take over the game (assuming you have a creature with Flying to draw some cards). I think a shell like the one above is a decent start to build with Tamiyo. Is she going to take over the format? Of course not, but I think she can serve a pretty valuable role in certain decks... maybe even a Bant Fish deck if such a thing is able to break out from the Gush dominated meta.

I'm really happy we have this little cabal of playable-but-not-amazing Walkers now at the 4-slot. Tamiyo, Narset, Nahiri, and (probably) Kaya are really adding variety to Vintage without breaking it. Kudos to Wizards!

There is a UGw delver list out there where I think this has a home. I do not like stretching to 4C these days, but perhaps starting with 4 delver, and 4 mayor of avabruck (which makes flipped delver a 4/3) and 2 or 3 Tamiyo would allow you a strong opportunity to take advantage of the +1 the turn it comes into play. Q

@enderfall This was the deck @CHA1N5 built about a month ago for the Team Serious Invitational and placed in the Top 8: http://themanadrain.com/topic/485/7-16-team-serious-invitational-results

@JACO Thanks for the clarification. Hat tip to you guys!