[EMS] Collective Brutality
This topic has been deleted. Only users with topic management privileges can see it. 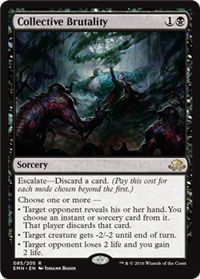 Talking about versatile cards. Here is a card strictly worse than duress but with alternative functionalities. The good part is that you can choose one or more of them, at the cost of 1 or 2 cards.

First, I only consider this card for the combo or maybe combo-control.

Against combo, you want to remove them the bomb; let's hope first ability does it. Against control it takes a fluster or fow, and gives information.

Second ability kills thalias, revokers and many other small creatures (including mentor and pyromancer)

Third ability seems pretty marginal, unless you are playing storm or confidants. It's just a bonus, but I don't expect it to be played often (if it is, then the card is bad).

Thoughts? I really think TPS or DPS can play this, at least as good answer to hate. I think it can be even maindeckable, depending on the build. Oath can also play it, to clear path, or to kill containment priest/aegis.

PD: I was also going to spoil Tamiyo, Field researcher (first and third abilities seem damn playable, while second is crap), but casting cost is awkward. Also Distended Mindbender has some merit if you play tasigur/gurmag angler, but these are not commonly playable cards in vintage and Mindbender alone is pretty unplayable.

I do like the versatility. 1B to kill something or discard from the hand seems fine; the damaging a player would only very rarely be relevant. I also like that you can transform other cards in your hand into more of these (that's how I view the Escalate cost) if you really need to do both.

I'm still not sure if I like this, though. Unsubstantiate, for all of the hate it gets, actually costs right about what playable removal / counterspells cost. It costs the same as Echoing Truth and less than Mana Drain, cards which are better but at least address the same situation. 1B is more expensive than ANY duress effect we play, and I have not seen Terror or its recent analogs get played in a long time.

So.. it's fine? Its a fine card. It is OK by me and it can come over and hang out if it wants to. I wouldn't refuse to give it a can of cheap beer if it asked.

PD: I was also going to spoil Tamiyo, Field researcher (first and third abilities seem damn playable, while second is crap), but casting cost is awkward. Also Distended Mindbender has some merit if you play tasigur/gurmag angler, but these are not commonly playable cards in vintage and Mindbender alone is pretty unplayable.

Don't do it, she's bad. She wants to be in a Noble Fish style deck because both her abilities really only work if you've got a board of creatures (+1 draws only if you have dorks, -2 lets you Alpha in). Already, that's a warning sign, since my beloved Noble Fishies havn't really seen play in years. Then, paradoxically, in a deck full of cheap doods, her ultimate is at its worst. Okay, you're casting Goyf for free on turn... 8? Who gives a poop?

I think the deck able to make best use of it could be dredge, against mentor perhaps, but I dont think its better than unmask main. Post board I would rather have my anti hate than this, plus the discarding can be really bad if you're digging for answers with bazaar.

This only feels amazing to me if you can capitalize on the discard on your end. Being able to duress and kill a hate bear for 2 cards is ok, but being able to say, reanimate the big nightmare you just dumpped in the yard makes this seem much better to me. I have to believe we will see some turn one plays in legacy with this that are like:

Swamp - Ritual - This for duress and one other effect, discarding griselbrand - Reanimate

All it really is doing is turning a creature from your hand into entomb, but it basically gives that list 8 entombs now and 8 Duress effects, so it seems really strong to me there.

Vintage does not really have a strong re-animator build though, so not holding my breath.

Is this better or worse than kohlagans command, which sees almost 0 vintage action? It may be a hair better, I'm not totally sure.

I take it back, kohlogans command is an instant, this isn't.

This card doesn't seem playable. Its an inefficient card for all or any of its modes

A split card of:
-Duress for instant/sorcery
-Kill Thalia

i think this card is playable, but just barely, what deck it would go in im not sure, but it seems like it may get played

Seems like a good card with Enter the Infinite. Seems versatile but card disadvantage needs to be really good for it to be worth it. On my watch list for playable