[EMN] Geier Reach Sanitarium
This topic has been deleted. Only users with topic management privileges can see it. 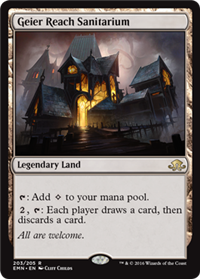 Okay, so here we have a perfectly playable land. There's nothing flashy about it, but it's solid as a rock. Colorless card draw and pitch at the downside of letting your opponent get the same benefit. Downside is negated if your opponent is hellbent. Good card is good!

But... playable? We've seen a lot of really cool new lands in the last few sets that seem quite reasonable but see no play. Howabout this one?

Interesting possibilities with Spirit of the Labyrinth in a White Weenie build. If you have 2 mana you haven't used in your own turn, this seems like a good outlet. And with only Horizon Canopy as draw engine, this could be the 2nd best alternative with some filtering when looking for a specific answer.

Notion Thief would work too in other decks, but you will probably want to keep your mana open in those decks.

I like it! And look forward to testing it out.

I really like this card, but I don't know about it's applications for Vintage.

Spirit and Notion thief are great examples of where this card can shine.

But it's probably not as good as Mikokoro, Center of the Sea.

It'll be interesting to see.

I wish the 2nd ability didn't require any mana to activate it. Then it would be a real beauty.

It's a different mikokoro. In fact it can be better with welder or madness (if there is anything playable related with madness).

However mikokoro has seen very little play. Maybe one of each helps pushing spirit of the linth or notion deck

Could this see play in Dredge? I know some builds used Library of Alexandria. and this seems just better than that so far as Dredge is concerned.

Could this see play in Dredge? I know some builds used Library of Alexandria. and this seems just better than that so far as Dredge is concerned.

This card is a very, very pale imitation of Bazaar. At least Library of Alexandria costs nothing to activate; this card won't turn online until turn 3 at the earliest, and Dredge usually needs that mana to fight hate pieces. So overall, while it's plausible to me this land might see play in decks like Thieves, I don't think Dredge is a good home.

This card is good as long as you have some way to break the symmetry. Notion Thief is obvious and I actually think this card is better than Mikokoro with Notion Thief as "Draw 2, discard 1, and the opponent discards 1" is generally better than just "Draw 2". You still net card advantage along with card quality and this keeps the opponent from building up some combination of cards to get out of it. Once the opponent is hellbent, you can realistically lock them out of casting non-instants by activating in the opponent's draw step, making it a two card soft lock.

Other ways to break the symmetry include running things like Deep Analysis (which is a reasonable inclusion with Dack Fayden), Worldgorger Dragon Combo, Delve Spells, Crucible of Worlds (discard land and replay it). Even without one of these, you get first crack at casting spells you would draw, which was a subtle advantage most people did not realize back when Brian Kelly and I were having fun with this card in various humanstorm builds. The problem in all of this is that Gush crushes strategies like this - they simply draw too many cards too quickly for incremental card advantage engines to be really viable in this metagame.

So great card, wrong format, is my impression.

this could see play in the grixis thieves deck as another version of mikokoro, it can translate to "draw 2 cards and discard one, your opponent discards a card" seems slightly better than mikokoro

Edit: i just thought of this, but is it possible that this could help bring back mana drain decks? they could mainboard 2 toxic deluge and side one more as a way to fight the creature decks.

Both Mikokoro and this are Legends, so I'd play first mikokoro over second GRS

I think his point was you can discard the extra copies of this when you draw, versus just a free draw for opponenet with this land.

correct to both previous comments.