Brisela, Voice of Nightmares
This topic has been deleted. Only users with topic management privileges can see it. 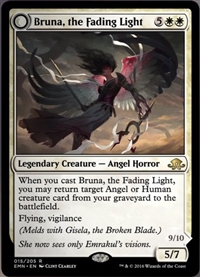 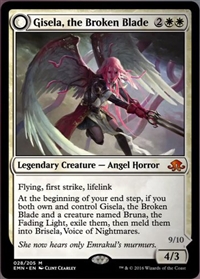 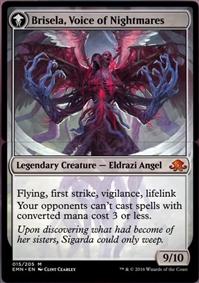 Brisela is a spicy lady. Ladies? She'll beat any removal that isn't named Supreme Verdict, races tokens, and wins the game in two swings. Not having haste is really bad, but it still seems like this lady really kicks butt.

Show and Tell doesn't do much with this card(s), but Oath does. Now, it does take two Oath activations to get Lady Gross Voltron assembled, but at least one half of the equation brings the other half back if you hit it first.

I don't know if this is better than that Eldrazi dude who doesn't like players casting Even-casting cost spells, but it's certainly powerful. Ultimately, I think having to dedicate two slots in Oath to your creature is a nobo, especially since the angels on their own don't really do much that is Vintage-relevant. Still, exciting stuff and a worthy card for this kind of art.

Gisele, the 2WW one, is a damn good card on its own. But it gets Bolted...

@desolutionist
I don't even go that far. A 4/3 flier that wins races and fights is fine, but without haste, it's really pretty boring in Vintage. Luckily, if she eats a bolt, that doesn't really matter because Oathing to Bruna next will bring her back for a good old... merging.

There's a joke in here somewhere about Japanese animation and tentacles and so on, but I'll be darned if I'm gonna make it.

So I'm extremely confused; You want to Oath once, and literally do nothing, when instead you can oath into a plethora of actual magical cards?!

to trigger the ability u must CAST.they're poop

Iona, Shield of Emeria is a better option if you're looking to play an Oath of Druids deck that absolutely needs to play a disruptive white legendary angel.

to trigger the ability u must CAST.

Otherwise you can loop two of them over and over with a sacrifice outlet, just like Sharuum the Hegemon - It's a shame Wizards has wised up to most of these "unintended" interactions

These cards aren't playable in any eternal format. In Standard, I believe you would run a 3-1 combination in a UWx control deck as Gisela is totally reasonable by itself and a huge hurdle to early aggressive strategies. Bruna as a 1-of provides a more powerful late game threat and should meld that turn with a Gisela either in play or the graveyard. It's interesting to note that white creatures are horrors, but the flip side is not, meaning it could be bounced by Thing in the Ice if that is a thing in Standard.

Even playing Akroma and Spirit of the Night, like old days, is better than this.

Entwined Tooth and Nail? I guess green ramp is making a comeback.

I don't have a way to easily transform Gisela.
There are safer 2 card combos, like vault+key, painter+grindstone or auriok+lotus. And then there are 1 card combos as oath or bazaar

Even playing Akroma and Spirit of the Night, like old days, is better than this.

Well, no, at least Brisela does a pretty good job of ending the game herself when she arrives. That's the point I was making. If Brisela was a normal creature, I think she would immediately be in the discussion as a good Oath target in a Mentor and Eldrazi meta. First Strike? Flying? Lifelink? Vigilance? You're NEVER beating that with your own creatures.

And Oathing twice to get Brisela still seems better than old school hasty fliers. Not as good as Griselbrand or Aeons Torn or probably even Salvagers, I get that.

So, maybe we look elsewhere. Notice how the two Angels implode immediately when they're both around? That means effects that cheat them into play only until end of turn are fine, since they'll exile and return as a new creature as soon as they're both around. There's a bunch of cards that do this.

From the top of the library:
Zoologist
Impromptu Raid
Call of the Wild

From deeper into your library:
Aethermage's Touch
Riptide Shapeshifter
Gamekeeper

From your graveyard:
Cauldron Dance
Sedris, the Traitor King

None of these work in Vintage, being too expensive or slow, but it's interesting to think about them.

Entwined Tooth and Nail? I guess green ramp is making a comeback.

I thought about that, but the problem is there are lots of ways to just win instantly if you're gonna cast Tooth / Nail.
Kiki Jiki + Pestermite
Triskeleon + That One Zombie Priest
etc

So... I guess there's really just no hope for ol' Brisela.

ok. If they ever print a card that's just, "1W: Transform target creature" this might have a chance.

ok. If they ever print a card that's just, "1W: Transform target creature" this might have a chance.

I don't think that would work, since you can't transform one of these cards without the other.

ah I see. Sorry, should have looked that up. Meld is different from Transform: http://magic.wizards.com/en/articles/archive/feature/eldritch-moon-mechanics-2016-06-27

Eureka with both of these in hand? Lulz

I'd rather Eureka into Nicol Bolas and Ugin.

I'm no better at evaluating spoilers than anyone else, but I am beyond confident that this will never see play in an eternal format. There number of additional hoops it is worth jumping through for this over a 7/7 lifelink flying Yawgmoth's Bargain is, in every circumstance, zero.

@MaximumCDawg I disagree. Akroma and Spirit are creatures that end the game the turn you activate Oath the second time. Brisela not only takes longer (she only melds EOT), but it dies to 1 removal.

Yeah, I mean, this card's hoops are probably just insurmountable. Merge is like every damn mechanic in Theros block -- designed to be un-cheatable and thus un-playable in Vintage.

Unlike most of that block, though, at least the merged form is really insane. It's easy to say it dies to removal, but since most removal costs 3 or less, that's not really true. If it were only a single card, we'd totally be talking about playing it,