My thoughts on Crossovers
This topic has been deleted. Only users with topic management privileges can see it.

As many of you already know Hasbro announced in an investors earning call that they will have Crossover MtG Products with other IPs naming Lord of the Rings (Hobbit etc.) as well as the Warhammer franchise.

While i like Lord of the Rings as much as everybody else, i am highly concerned about this. No i am not saying this will the death of magic or anything as dire as that. On the contrary i strongly believe that a Lord of the Rings Set will be financially speaking a massively successful if not the most successful Set ever released if correctly developed.

That aside: for a long time a have the feeling that MTG is, while not dying, getting worse by a thousand cuts, some of which are more personal and some are pretty widely spread not liked by the player base:

And i would like to add to this list: Crossovers with other IPs.
Until now we had 3 kinds of Crossovers happen all of which where handled differently: 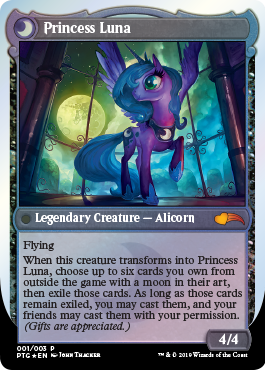 First of we had silver bordered crossovers like My little Pony and Transformers. I personally do not care at all for these, but i see that some people really liked these. I see no negative to this approach and would be fine which WotC to peruse more crossovers in this manner, since none of these cards are legal in any official formats.

The second type was more intrusive and i am of course talking about the Ikoria/Godzilla crossover. In this case the crossover was handled as official alters of existing cards. All the Godzilla names and Artwork was printed on cards that where also available as "normal" MtG cards with different artworks and names.
This felt strange to me to see Modern military hardware or buildings together with normal MTG cards, however with time i believe that this kind of crossover is not that different from people just altering their cards anyway with which i have no problem at all. Its your cards you can do to them whatever you want, and you can play whatever version of a card that you want, even if i don't like your specific version.

The third kind of crossover is pretty infamous and had a ton of backlash, but, and that's way more important, was financially incredibly successful. This was a clear sign to Hasbro and WOTC that fan backlash is worth it if the product still sells. (this is of course just a presumption by me). Why was this product so hated by most fans? First of all it was very limited and expensive and secondly the cards where newly designed cards, not reprints, that where only available in this version, and where black bordered, meaning legal in official formats. Now this was not just a fun thing to do, but it was actual legal, official cards that depicted modern real world weapons, equipment, clothing and faces of real people (we had real faces on cards this done before, but in a very different context).

I fear that these new crossovers will be black bordered and will change mtg for the worse while still being highly financially viable.

Yes it is Lord of the Rings and i am myself very much eager to see this crossover. However this is just one of them, pretend it isn't Lord of the Rings (which at least is a fantasy setting) but any of the other IPs that will surely follow if this makes enough money.
Warhammer (already confirmed), Star Wars, Star Trek, Harry Potter, Battlefield, Stranger Things, Cyber Punk, Grand Theft Auto, Song of Ice and Fire, Breaking Bad...
Sure some of them you might like, but now we don't have a choice anymore with playing these cards. Together with modern power creep and card design you wont have a choice to just not play a playset of [Going Warp Speed] in your deck because it synergizes so well with [Professor Dumbledore] if you want to stay competitive.

I know this seems pretty over the top and pessimistic, but is it really that different from The Walking Dead?
And if this makes money, which i am pretty sure it will, why would WotC and Hasbro have any reason to stop? For the last couple of years they definitely showed that they prefer short term profit over the long term health of the game.

It's fine I guess. Magic has survived worse. I expect this will be another case of the online community making a bigger deal out of an announcement than it ends up being.

You forgot that we are also getting a D&D set this year which will actually be the first test of this in a standard format. People are not really up in arms since the properties are not so different and because there is already magic in D&D, but it is happening.

I have no idea how this pans out, but since these cards are not standard legal, possibly not legal in other formats pending confirmation, I am curious. I think it is very likely that they make some of these sets insular enough that the power does not translate outside of what is effectively a block format. Maybe just fill the formats with a lot of parasitic cards that are only good in a limited pool, in the same way that some weak mechanics are actually very desirable in limited.

Like I was saying in another thread, if you made a mox variant in the LOTR set but it only made mana to be spent on Fellowship Tribal cards, it would be very powerful in that block but would be next to useless in the rest of the game, so it wouldn't be an issue.

The format that is really going to feel the effects though is Commander.

My only concerns on issues like this are game balance and card availability. But neither of those are new to the game.

The more i think about this the more i realize that i cant quite put my finger on why exactly i think crossover IPs coming into MTG is a bad thing. It feels to me like some MTG identity is lost, however it is replaced by something else.
I am still thinking that this isn't a good development, but i cant really rationalize why i think that currently.

@vaughnbros said in My thoughts on Crossovers:

Maybe there will be a McDonald's release once a year!

I’m gonna buy a lot of happy meals, if so.

You don't necessarily need a reason to dislike something, it makes me unhappy is a perfectly valid response.