Krak, the Thumbless
This topic has been deleted. Only users with topic management privileges can see it.

This seems really great to me. I don't think its too hard to get into a "more mana than cards" situation. This profits from that situation. 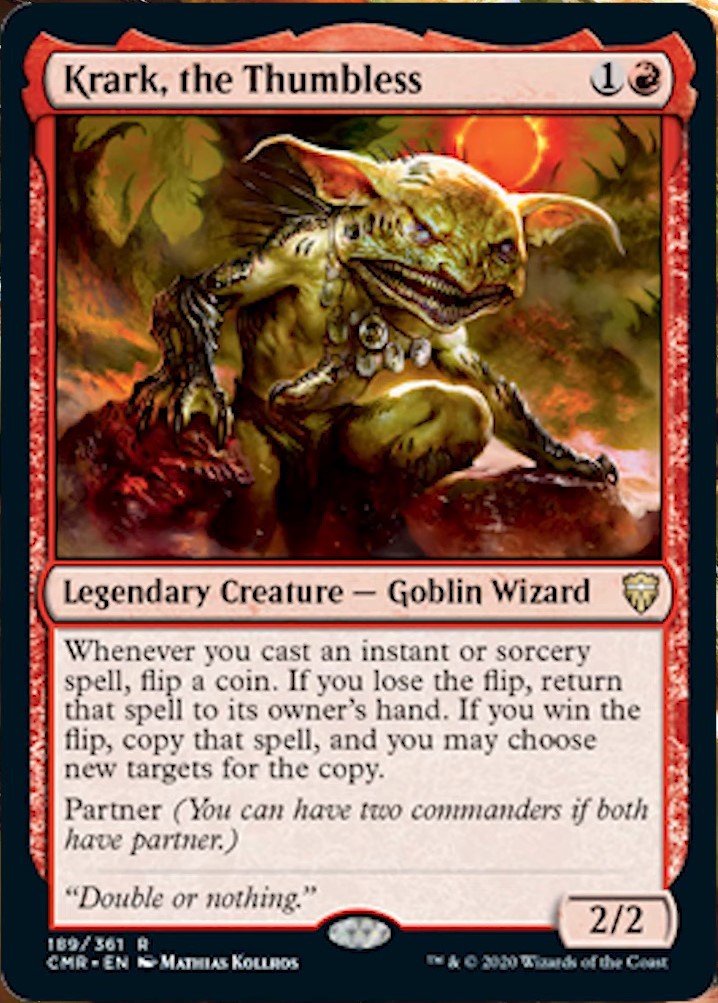 The fact that this guy returns the spell to your hand, instead of countering the spell, when you lose the flip makes him much stronger than I first imagined.

You will double all of your spells for, on expectation, double the mana cost. This is a great deal for most red spells. I'm going to try to see how easy it is to combo off with this guy, a bunch of red rituals, a bunch of red card draw (Light up the Stage, Dangerous Wager, Faithless Looting), a couple of Underworld Breaches, and some burn as finishers (maybe Grapeshot; storm is weird since you want to lose the flip for your storm card). I'm guessing: pretty easy.

@evouga said in Krak, the Thumbless:

I think if you just resolve ancestral this is great. Spending U, or UUU either way its great for 6 cards.

Even with a single Bolt, its like RR average for 6 damage. Wow

@john-cox I'm leaning more towards mono-red than UR as a shell though. Besides the obvious Ancestral Recall and Time Walk, blue doesn't bring much to the table: getting your own Force of Will, Treasure Cruise, etc. remanded is clearly terrible, and even double-Preordain for UU is not that great because you will quickly run out of blue mana to chain them together.

On the other hand a mono-red shell can fuel itself with rituals (which are great since Krak amplifies the net mana you gain from them), which I think ends up more consistent even if the individual red spells are weaker than the blue cantrips.

(Either way Gitaxian Probe is an auto-include, of course.)

Haha, I love this card. Just how a Goblin should be. It's kinda awkward with counterspells, though.

I wonder if you are playing Krark, does it actually make sense to use the thumb? I mean you do want to win your flips.

I do want to live in a world where a coinflip deck is viable in vintage. I really do.

Xerox engine deck with this on the top end is not completely terrible, but there might be better things to do with a ton of mana and spells.

Its awkward with pitch and delve spells.

@vaughnbros said in Krak, the Thumbless:

Its awkward with pitch and delve spells.

Yea but it is also disproportonatley good with spells that make themselves purely free or close to it: Gitaxian Probe, Summoning trap, Archive Trap, Land Grant, and Mindbreak Trap. Not saying those all see play, but basically he can only double those.

The drawback is actually an advantage alongside a Mentor-type effect since it'll keep triggering it.

I guess it can't hurt to throw 1 copy of this into a deck and see how it runs.

@vaughnbros said in Krak, the Thumbless:

The drawback is actually an advantage alongside a Mentor-type effect since it'll keep triggering it.

That is situational though. If you cast Karak, go to case a spell, they bolt Karak in response and you lose the flip you really just got killed on tempo. Him getting bolted out is always a threat but with the few of these cards all that will happen in the worse case scenario is Storm count+1.

I think the interaction with Mindbreak trap and MM is actually really strong and you would likely want to use them over any traditional counter magic, and I could see a list that wanted to run bolts and somelight disruption and just go face. Pyromancer seems fine, I think Mentor and splashing white at that point seems win more since you cannot protect it with FOW as you normally would be able to.

Not sure what other purely free spells there are that are worth exploring. Mogg Salvage could be a thing.

@protoaddict said in Krak, the Thumbless:

Helping your opponent stock their graveyard is always a rather dubious strategy in Vintage, but wow, mill 26 for 0 is certainly efficient enough to deserve respect.

All I know is that in a red/black storm shell, getting 2 Tutors and a few Rituals off should be an easy GG.

@serracollector said in Krak, the Thumbless:

All I know is that in a red/black storm shell, getting 2 Tutors and a few Rituals off should be an easy GG.

It CAN turn Manamorphose into a Darw 2 ritual. Not the hill I want to die on for this though.

This card is going to have some REALLLLLLY feel bad moments.

What happens if the spell gets countered before Krark's trigger resolves? Does it still see a spell that doesn't exist anymore?

Losing to Krark's flip on your Flusterstorm seems like one of the better things you could do, I think I would start there. Also its worth mentioning that Ravenous Trap is unaffected assuming it's condition is met. Seems to me his largest downfalls are that you almost certainly won't be running the up-to-12 various Forces that are available and that he is miserable with a Sphere around, but those can be mitigated in deckbuilding. I'm assuming that anyone playing this card is accepting the addition of greater variance to a high-variance game and ignoring that argument.

last edited by
I
I
ilpeggiore Reply Quote

it's damn exciting even in a fair deck

I think it does “counter” the spell by returning it to hand. It’s just like Venser or unsubstantiate

Oh, I'd run this in an aggressive Death's Shadow deck with phyrexian mana. Surgical and Probe would be great with this. Add bolts and key blue cards and seems you'd have a fast clock.