[CMR] Opposition Agent
This topic has been deleted. Only users with topic management privileges can see it.
E
E
evouga Reply Quote

We've got a spicy one today: 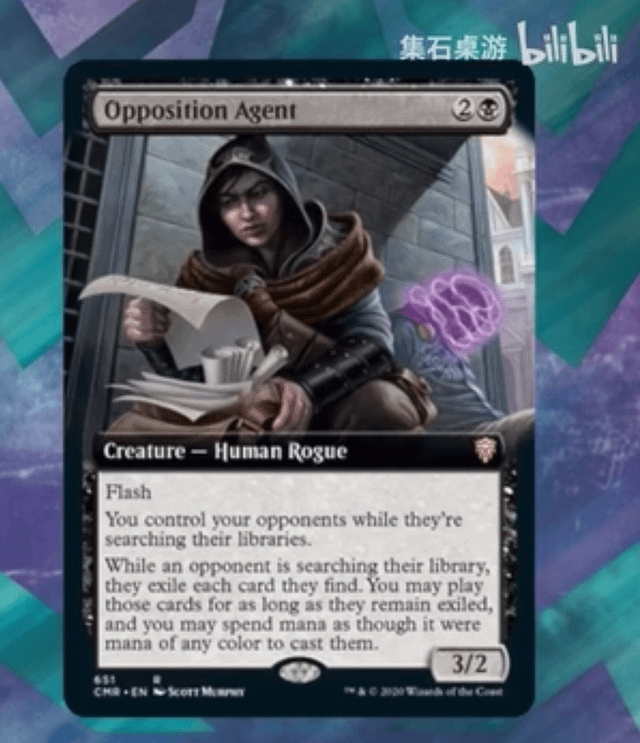 Opposition Agent 2B
Creature - Human Rogue
Flash
You control your opponents while they're searching their libraries.
While an opponent is searching their library, they exile each card they find. You may play those cards for as long as they remain exiled, and you may spend mana as though it were mana of any color to cast them.

In addition to being backbreaking against any mana base reliant on fetchlands, this guy also hits the cards like Golos and Doomsday. Flash makes blowouts a very real possibility.

There are also cute interactions with Wishclaw Talisman and Maralen of the Mornsong.

Opposition Agent does very little against PO, so might have a fairly low ceiling in terms of mainstream playability, but it's one of the more exciting new printings to play with and build around, IMO.

Search effects are usually worst against the GY matchups, but it makes for an easy sub on games 2 and 3 for a GY hate card.

Powerful enough to steal effects, like Tinker and Demonic Tutor, from your opponent and leave a creature around. Its like Snapcaster on steroids in a lot matchups in terms of value provided, and versatility.

Its a worth a single certainly in most decks that play black, and perhaps worth splashing black in other decks to accommodate it.

I'd be most interested in seeing a brew with 4 of these, and some cards like Path to Exile and Assassin's Trophy, but maybe an effect like that on which you can combo with it. So what are some cards like that?

I like Agent a lot. This is the kind of angle of disruption that I like. Being Human and having flash makes Cavern an extra powerfull counterspell, euh, land..

How can I steal their Oath target with this in Humans?

Maralen is probably the strongest option as she essentially wins the game on the spot (she’s only an Elf Wizard, sadly.)

Ghost Quarter becomes Strip Mine. Field of Ruin improves too.

This card is incredibly brutal I would be more surprised if it did not find at least niche use. My first 2 thoughts are humans and grixis thieves and as a doomsday player I am very afraid.

Hum... what? This does nothing against Oath.

Err, talk about powercreep. It may be just ok for Standard, but in the context of eternal, this is an incredibly pushed card.
At first I read a spoiler where the last part was left out, and at 2B it would have been a powerful Hatecard.
Here I read the full text and you even get to play the cards, which makes it a 3:1 trade.
I mean seriously, 3/2 flash with a very possible 3:1, and if not it stays around as a lockpiece against further tutors.
This will become metagame warping, mark my words.

It's true it's just a mindcensor vs. "may search" cards, and several archetypes are not affected, but it's still a 3/2 flash in the worst case, with a game ending upside.
Also that 2 card combo with Maralen might actually spawn a new ritual deck.

I think this is an accurate assessment, overall. I'm not actually sure a creature is more vulnerable in Vintage than a blue permanent, though.

Flash is also very relevant here: opponents can crack fetchlands in response to Ashiok and won't play tutors into Ashiok. In contrast the opponent has to respect the possibility of Agent whenever you have 2B up, or risk a devastating blowout.

It's true it's just a mindcensor vs. "may search" cards, and several archetypes are not affected, but it's still a 3/2 flash in the worst case, with a game ending upside.

This can be ritualed out for what it's worth which puts it above mindcensor to me.

Everyone is looking at the blowout flash plays but I think it is very reasonable to consider playing this proactively turn one on the play and basically casting Spyglass on every fetch your opponent has. There are simply opening hands that cannot recover from this resolving.

Now there are lists that also basically ignore this (shops and traditional dredge are notable) but all in all the one sidedness of this effect feels strong enough to build around.

@protoaddict I can't really see any reason you turn 1 this on the play. It has flash, so if you pass the turn and have access to 2B, your opponent will likely try to crack that first fetch and get a blowout play when you flash this in. If you play it and pass, they likely lead with their non-fetch land first and then can possibly plow or bolt. Casting this in response to the first fetch or EoT on your opponent's turn at least is always the optimal play it seems. Playing this out as a sorcery on your turn is probably the worst use of it.

They crack a fetch, and you can only find a Island or another land off of the search. You can snag their only Black source, or something I guess if they only run 1 of an off-color. That's not grabbing their oath target. You want need a search that finds more options.

Well Maralen is very good with this to DT every single turn (including your opponents).

Where does this deck go from here? Storm? Aggro? Some sort of other combo?

@evouga you get 1 gotcha moment with this vs the first gy wipe with Ashiok. The effects are on par, I guess, specially if you use this against a fetchland activation.
As I said, I think this is better than Ashiok, but I dont know if it's THAT better.
The good thing is that if opp forgets about this you get a real upside over Ashiok hahaaha

Now, "comboing" with Malaren seems soooo bad. Malaren is a shitty card on her own and the combo is very vulnerable. You guys are thinking small. You actually want Wishclaw Talisman with this.

Thank you I was confused about how the card worked.

I am now less enthusiastic but I still believe the card is very good and likely although not certain to find a home.