[IKO] Of One Mind
This topic has been deleted. Only users with topic management privileges can see it. 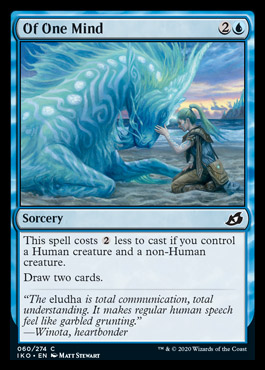 2U
Sorcery
This spell costs 2 less to cast if you control a Human creature and a non-Human creature.
Draw two cards.

Well, we have the next restricted blue draw spell already.

Is Thoughtcast with multiple creature type requirements that good? Feels like a Ux Fish kind of card, seems unlikely that it should be strong enough to get restricted

The current restricted list has a number of Xerox-ey cards, but I don't think we've ever had a restriction that really hit Fish-type decks more than other archetypes.

Fishlike decks tend to be pretty reactive and metagamey, which makes it hard for them to become really dominant

Does a single delver trigger this in full?

Interesting card. Seems good with Pyromancer, but Preordain is still better and I don't think Xerox wants even more draw effects, though I've played Xerox myself so I don't really know.

Monastery mentor comes to mind. It's a human monk that makes non-human monks. Cast just one spell and then each of these becomes U=draw 2. That seems even more bonkers than jeskai mentor already is.

I initially saw this as a worse thoughtcast too, until pyromancer was mentioned. Mentor is strictly superior, but jeskai can run both. Jeskai already runs snapcaster/JVP and dreadhorde arcanist, so that also satisfies this discounting condition. Preordain is better early, but a more cantrippy version could squeeze in 4 of these and just trim a few other spots, going more all-in on a "go wide" kill approach.

This seems like quite the requirement for +1 card. Winged words so no play and is slightly more expensive but much easier to cast.

Visions of beyond honestly seems more likely to see play than this and that is competing with the delve cards.

@serracollector Delver is human on both halves.

Apparently I was confused on the wording. I didn't know non-human meant it couldn't have human in it at all, just thought it needed a different type. Makes sense.

My thoughts were Mentor, Pyromancer and Sai. Someone on Facebook mentioned Urza too. That it'll be restricted was more of a exageration, but feels like it can be a very good player in decks with those cards.

@serracollector The mantra I read in a judge article that helped my thinking on this was to figure out if something is Non-Human, first ask yourself "Is this a Human?" If the answer is Yes, then it can't be Non-Human.

Sad it does not trigger of changeling.