[IKO] Lutri, the Spellchaser
This topic has been deleted. Only users with topic management privileges can see it. 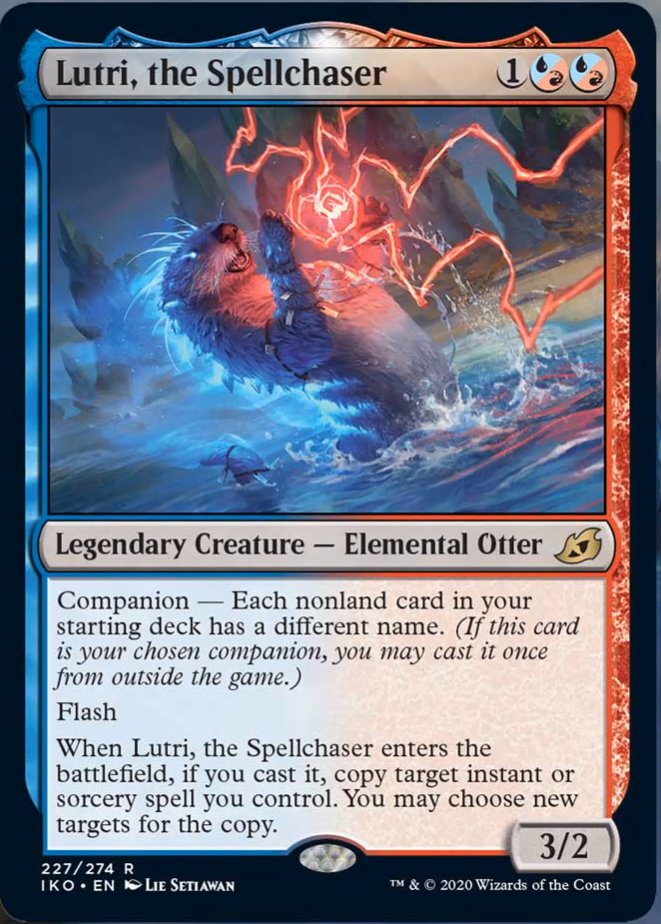 I don't think the requirement is that hard to pull off in blue. Ability and PT combo is only ok but the fact that it's in a lot of ways a +1 to starting hand size throws all that out the window.

I'm curious to see what people can come up with for this, but I think it will be difficult to make up for the loss of 4x Force of Will.

On the plus side, you could run Tainted Pact easily with this!

Actually, I just see this thing as a quasi-snapcaster that could be run in multiples main deck. Costs 1 more for the ability to be played in red (non-blue) and have +1/+1, which is not insignificant. It flashes in to block/kill a dreadhord arcanist or a lodestone golem or whatever that snappy can't take out. You also get to keep your spell in the grave for later shenanigans as opposed to exiling it from the grave with snappy.
It's not really much better than snappy when it is better and is more often worse, but I think it could just be a "red snapcaster" in some decks if they are trying to be non-blue. There are likely better options. As a companion, I think the deck-building constraints negate the plus of this card more times than not. Most decks want multiple combo pieces or at the least 4x FoW. A PO deck with a miser's PO seems bad to me.

Companion? What the.. Really? I can't even.. What's next? Constraint: For the rest of the game, you may not sit on your chair? Commemorate: When you cast this spell, sing a song to commemorate a dead family member? Stop inventing silly, overly complex mechanics that change the rules of the game and create some quality cards for Gods sake.

As for the card, it's hilariously bad and won't ever see play unless someone tries to Donate it to the opponent and call a judge.

Yeah, I'm aware of that. I was just pointing out that the only reason why this would ever see play would be to try to troll someone that way.

It seems very limiting. Compare this to Twincast, which sees zero play.
Is the 3/2 body so important that you're willing to:

Can we agree that MTG has now officially jumped the Shark?
ship's going down, together with Spacegodzilla, Death Corona...

I'm sure they are very aware of it. They just printed a LITERAL JUMPING SHARK!

@peterflugzeug thats the best card of the set, tbh