[ELD] Stonecoil Serpent
This topic has been deleted. Only users with topic management privileges can see it.
C
C
Cuikui Reply Quote 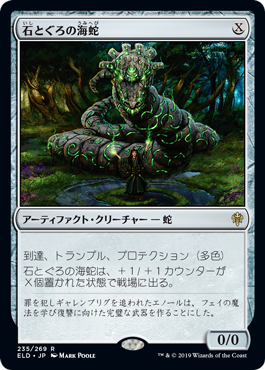 It is protected against Dack, Teferi and Assassin Trophy.

Is it good enough for Shop ? I don't think so, but it is worse considering.

I think this card is bonkers. Sizeable good threats are always interesting to Shops.

There are a lists where this dodges basically everything they can do. It also dodges bolt at 4+ inherently, with STP or grudge probably being the best and most reliable answers. Trample making it unchumpable was just the thing it needed to me to make this a contender, and I would totally expect to see this out of shops boards.

The cost being just X makes this scale very aggressively. I'd even consider one of these maindeck. Topdecking this late game is probably a 1 Turn window you give your opponent. Also plays well with Ravager because of trample.

Man that drove me crazy.

Anyway this card is awesome. Fare thee well, */3 guy that I don't remember the name of. We hardly knew ye.

I’ll test it in Survival even without Workshops, that’s how good I think it is.

This seems incredibly good to me if it can find a home.

Shops pilots have wanted threats that are immune to Dack for a long time.

Certainly, Arcbound Ravager and Ballista provide some degree of immunity to Dack, but this accomplishes the feat without an enabler. The trample means that Dack is under direct assault.

This could also fit in other types of Shops decks, too. A traditional Stax deck would love this. I suppose anything that plays Traxos should consider this.

Someone brought up the fact that this is hit by Force of Vigor and the X mana X/X eldrazi isn't while also being immune to dack. Sure can't be cast off of shop, but that card saw basically 0 play.

@garbageaggro Endless One doesn't have trample nor any other evasion.

Someone brought up the fact that this is hit by Force of Vigor and the X mana X/X eldrazi isn't while also being immune to dack. Sure can't be cast off of shop, but that card saw basically 0 play.

Wasn't that played in the colorless Eldrazi decks that were kicking around a few months ago?

I think this and Endless one are different enough that the comparison isn't too diagnostic of this card's playability. They serve different needs.

That said, I'm with you in that I wouldn't make a bold prediction about this card being widely played, format defining, etc. This is a hostile metagame for artifacts that enter the battlefield with no immediate benefit.

However, I do think it offers some unique benefits to Shops decks and merits exploration on those grounds.

For example, prison style lists are often too slow to close the game quickly enough due to the restrictions of Thorn, Lodestone, and Chalice. In those decks, increasing the offensive potency comes at the big cost of sacrificing the lockpieces (i.e., to close out the game, you need more creatures and end up cutting Wires/Rods etc.). This incentivizes going for a few big creatures creatures that can shoulder the offensive burden alone. But with Spheres and Rods, casting that Steel Hellkite is tough. This card can be both big enough to close out a game and can be cast for much less if needed (reminds me of Trike versus Ballista). Granted, I don't think this style of list is playable right now, but I will always try.

I'll be testing it in some older style Shops lists. Like most things I test with Shops, it probably won't work out.

This card is fantastic in Null Rod shops because it can't be Dacked and it can't be chumped by 1 or 2 tokens. Whether Null Rod shops is more competitive than Ravager post restriction isn't clear but I'm playing this over the haste flyer, toilet man or maybe even Traxos.

I just wanna see this in random PO lists that make a bajillion Mana. Surprise, it's not just combo! Tap I win.

@serracollector Isn’t that what Karn, Scion of Urza and Managoger Hydra do now?

They do, but those cards are more difficult to return and replay with Outcome. You can return this, replay it at 1 mana, Outcome it again, etc.

I'm excited by this card. Pro-Multicolor also means that it cannot be blocked at all by Hogaak or Sphinx of The Steel Wind.

If anyone was curious, Brian Kelly was quite offended by this blatant anti-Dromoka, anti-Gisela, anti-Arlin, anti-Vraska hate card. I'm not sure who has it out for Brian at the DCI, but they deserve a raise for this killer design.