[ELD] Oakhame Adversary
This topic has been deleted. Only users with topic management privileges can see it. 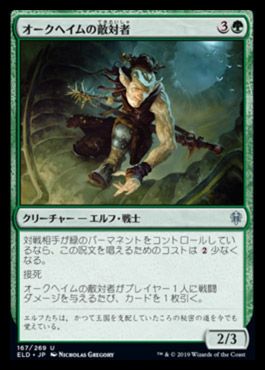 Whenever Oakhame Adversary deals combat damage to a player, draw a card.

IS THIS GOOD? I mean, it is likely a sideboard only thing but 2/3 deathtouch ophidian for 2 seems in the same territory as bob in the matches where it would matter. In other formats it feels almost pushed.

Seems very situational. If you're on the play, it won't come down on T1. On the draw, you need to hope opponent has T1 Shaman or Rootwalla. Even if they do, it trades with Rootawalla or Vengevine and seems unlikely to connect.

Not sure against what other deck you'd bring that in, but against Survival it seems heh.

This is a bit of a nutty cEDH card though. Multiplayer format with lots of reasons to play early green permanents.