[ELD] Mystical Dispute
This topic has been deleted. Only users with topic management privileges can see it.
C
C
Cuikui Reply Quote 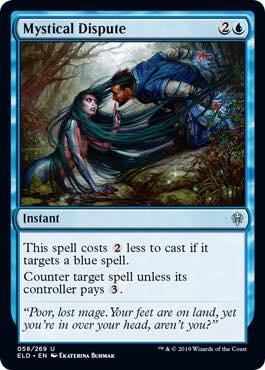 Mystical Dispute 2U
Instant
This spell costs 2 less to cast if it targets a blue spell.
Counter target spell unless its controller pays 3.

It is less powerful that Red Elemental Blast to fight blue, but it is not completely dead against the rest. It is also mono Blue. It dodges misstep even if it is less important now.

Can this see some play ? in BUG maybe ?

This card is very good in a permission war (to force your bomb through), but as a general counter spell I believe it is worse than Mana Leak due to the clause.

It´s not worse than Mana Leak, it costs half the mana. This fights for Spell Pierce's slots. It's way more limited, but can counter Snapcaster and Leovold. Seems great to fight Narset too, but Pierce already does that. I like this, and it would be much more enticing in a 4 Misstep world.

There is a very large logic tree you need to move down to see if this is the card you want.

I mean this isn't even the extent of it. Long story short this card has the bonifides to be a player but I fail to see where it fits. It's not a great sideboard card because there are more tailored options in the game for whatever you want to deal with, and as a maindeck card it seems too likely dead to me in the matchups where the 3 mana version would see play (shops, dredge, thalia)

Is this better than flusterstorm in a counter war?

Well it counters the Narset. But in most cases just worse than Pierce.

You gotta consider that the best deck is turn one combo belcher so what are we even talking about here.

I'm with @Serracollector on this one. The interaction with painter is way to significant to ignore. It may only see play in 1 deck but may push that deck from relative obscurity to a deck that can steal weekly challenges and league 5-0s.

Once Upon a Time is another boon to the Painter Archtype as well serving as painter copies 5-8.

@p3temangus I'd agree with you until that last sentence. Once Upon a Time has no place in Painter. It´s not a tutor, so you have a great chance to wiff. Also, paying 1G for the extra copies seems pretty bad.

craw_advantage Reply Quote
This post is deleted!
last edited by

The interaction with painter is way to significant to ignore. It may only see play in 1 deck but may push that deck from relative obscurity to a deck that can steal weekly challenges and league 5-0s.

This card has to be worse than red blasts 1-8 in painter though right? Do you have room for 9+ of that effect? IN all the old build of painter i played i struggled to play more than 4 and even with MM restricted I can't imagine playing more than 6-7.