Eldritch Evolution
This topic has been deleted. Only users with topic management privileges can see it. 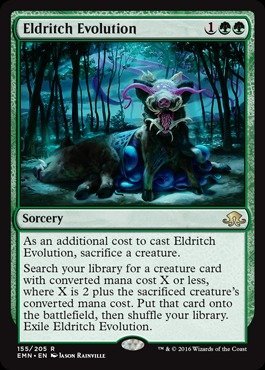 In modern there is a deck that uses Eldritch Evolution and Allosaurus Rider to get early Griselbrands. There is a lot of card disadvantage there. In vntage we have Skyshroud Cutter. This does not get Griselbrand, but there are still good options for a win con.

This is the best card to get agaist most blue lists and may work against some Forge Shops lists.

I like this guy against Dredge. Fetching a Glacial Chasm and Strip mine, before setting up a Dark Depth win is good.

I just wanted to let people know this is out here and encourage people to mess around with it. this is on par with flash hulk, and we have preordain now. I also think serum powder is worth trying.

Thanks for the post and inspiration John. I think it’s worth posting things like this to try and get people inspired to brew even if it isn’t a “tier 1” strategy. There’s a lot of fun to be had in trying new things with cards like this.

I’ve actually played Evolution in survival alongside Flash (and tried natural order too). You can evolve your hollow ones which come into play for free into Elesh Norn, Carnage Tyrant, among other targets like the ones you mentioned.

I tried Primeval Titan alongside Depths Combo (which doubled as a flash target) and also tried Rampaging Baloths which can be overwhelming fast. I even tried Cataclysmic Gearhulk which didn’t go over well lol.

There was even certain usefulness into turning things like Deathrite or Rootwalla into a toolbox. I.e. they can evolve into a Magus of the Moon, Eidolon of Rhetoric, leovold. Etc.

I think there’s a lot of building room for the card if people are willing to step out on a ledge.

I’m always brewing and encourage others to do the same. There’s a lot of fun to be had.

Seems good with some of the delve units as well. Hooting mandrils and tasigur and Angler are all decent/good in many MUs already.

I've been having fun with this brew. I have not tried flash but I can see that finding a spot too.