TSI The Land 6-15-2019 Results
This topic has been deleted. Only users with topic management privileges can see it.
N
N
nartman99 Reply Quote

We had a few last minute cancellations but 15 players came out to battle some vintage with London Mulligan and no draws allowed. 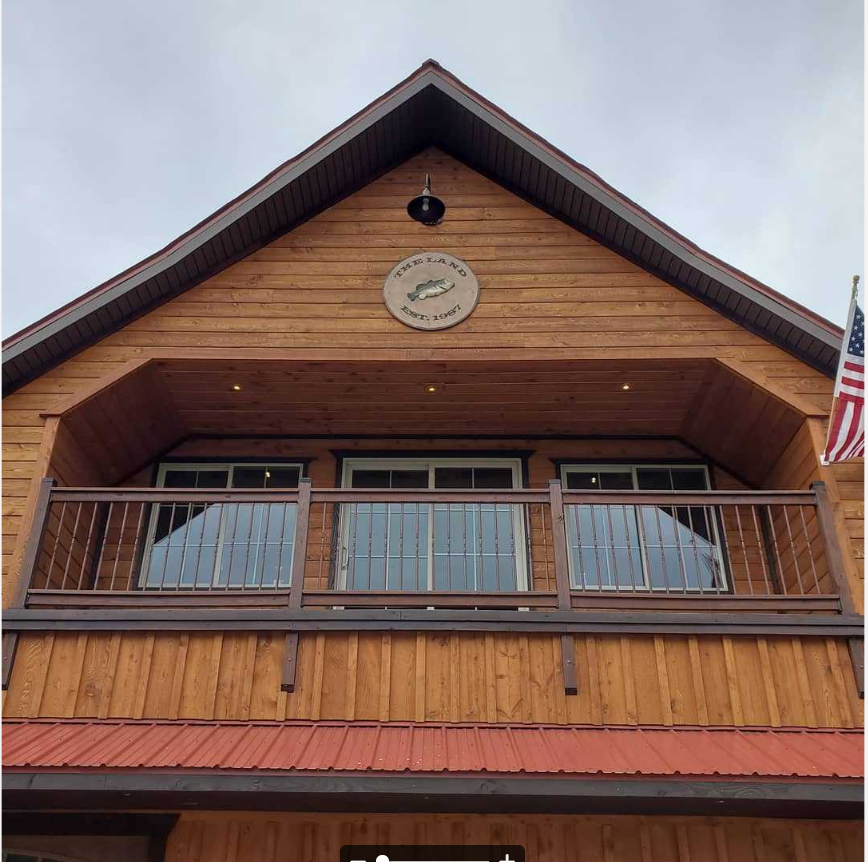 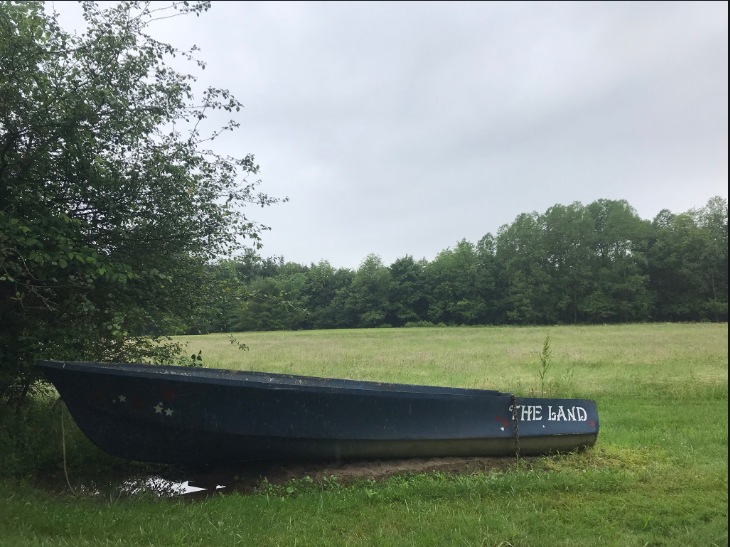 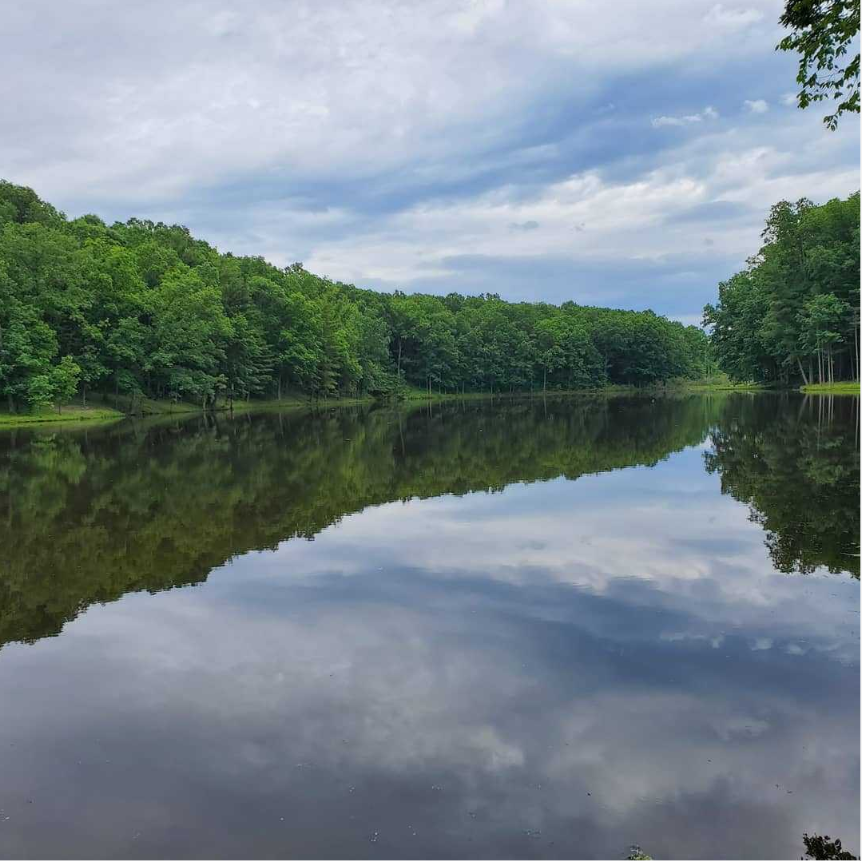 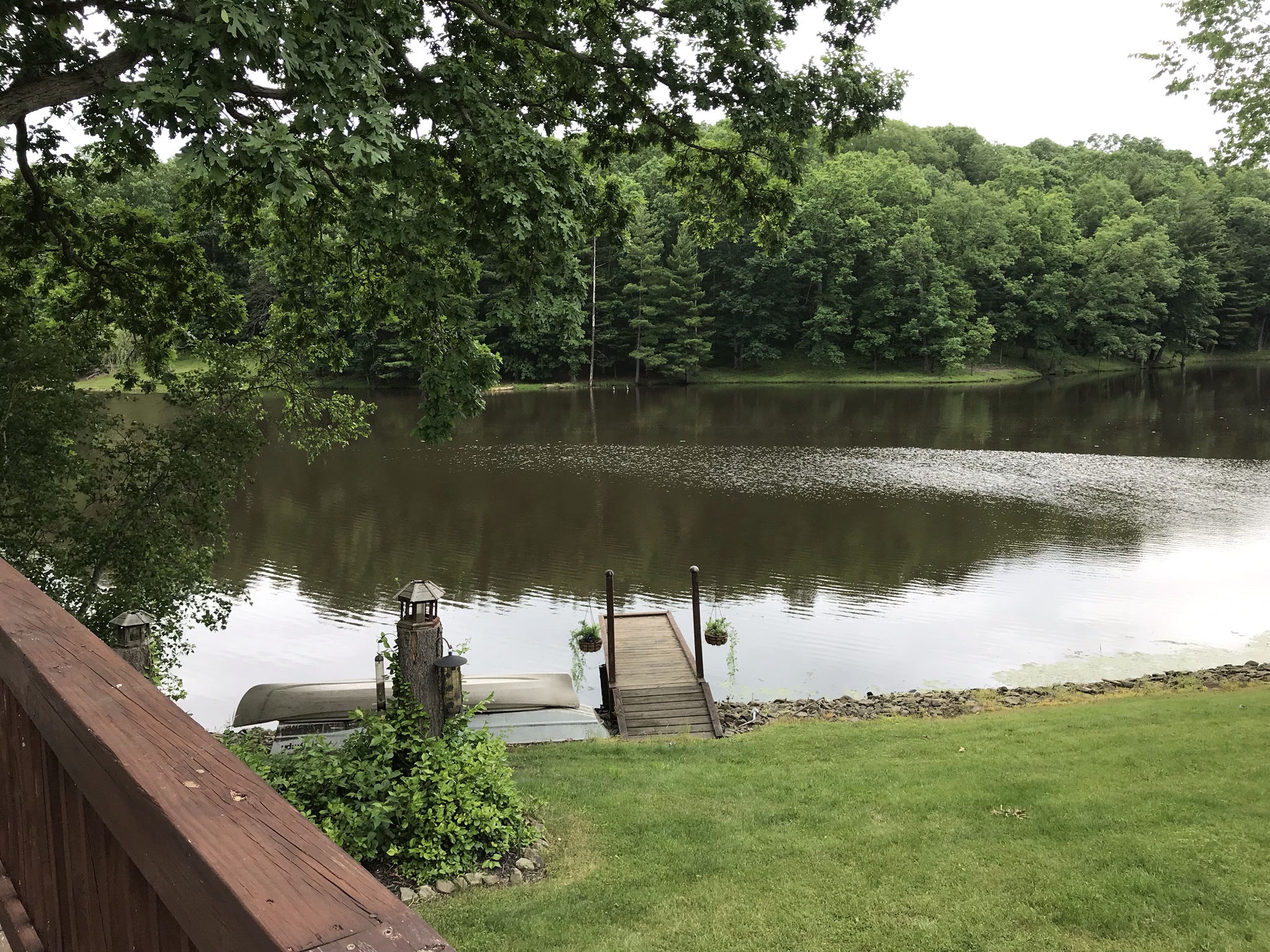 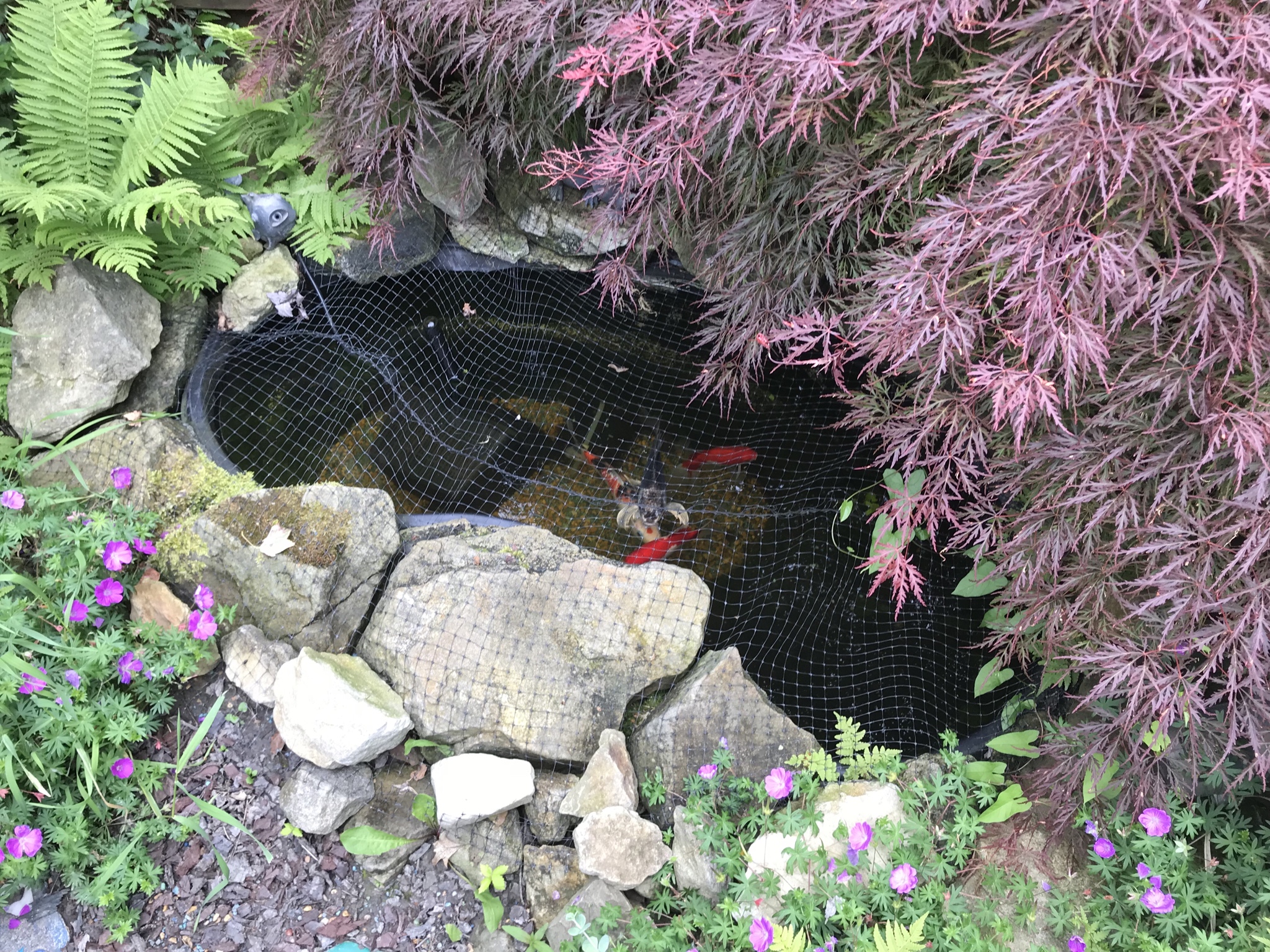 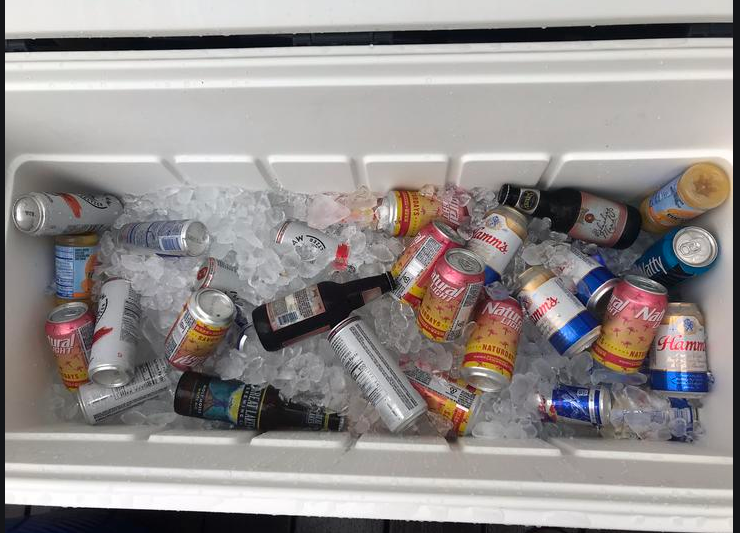 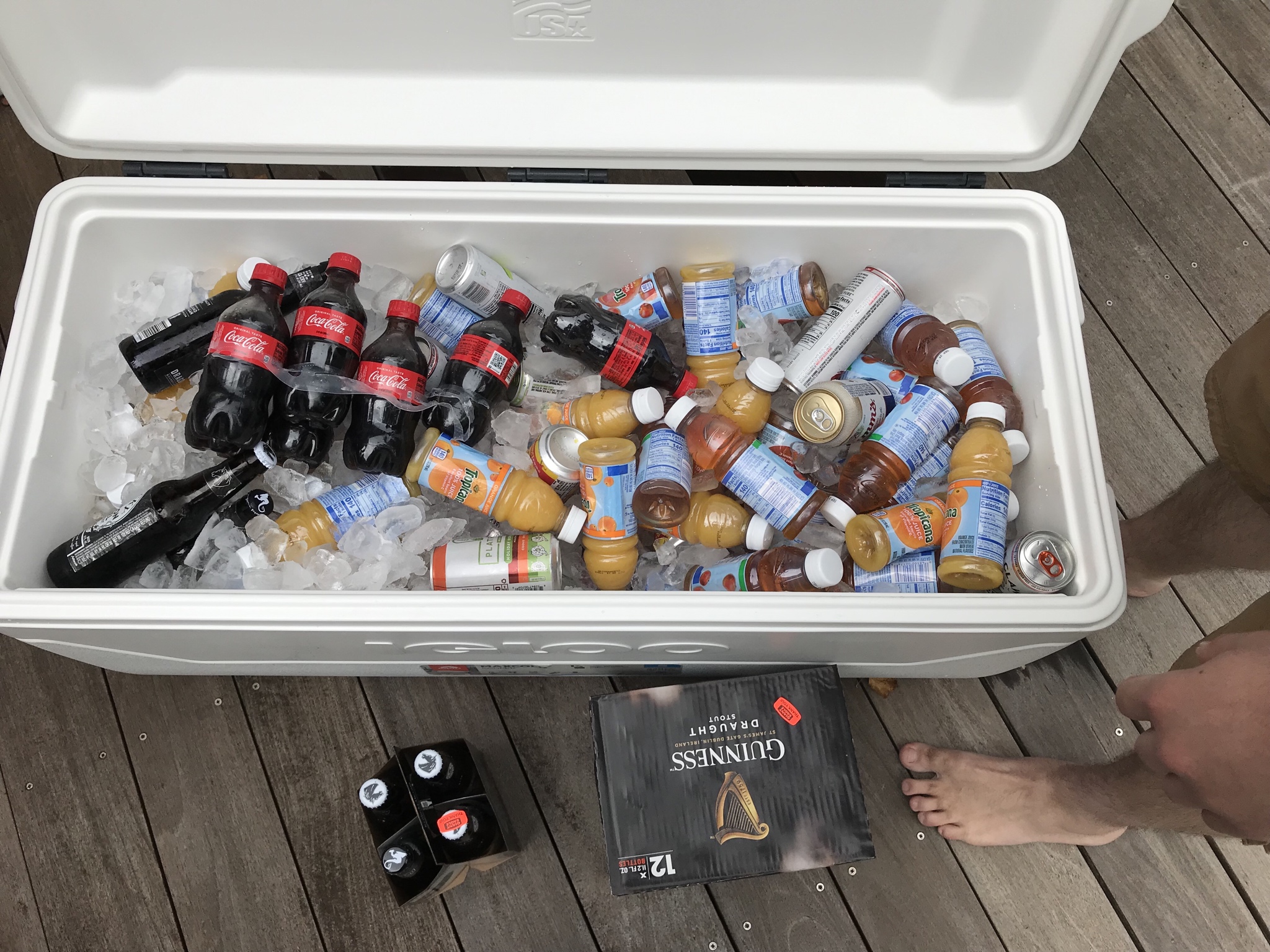 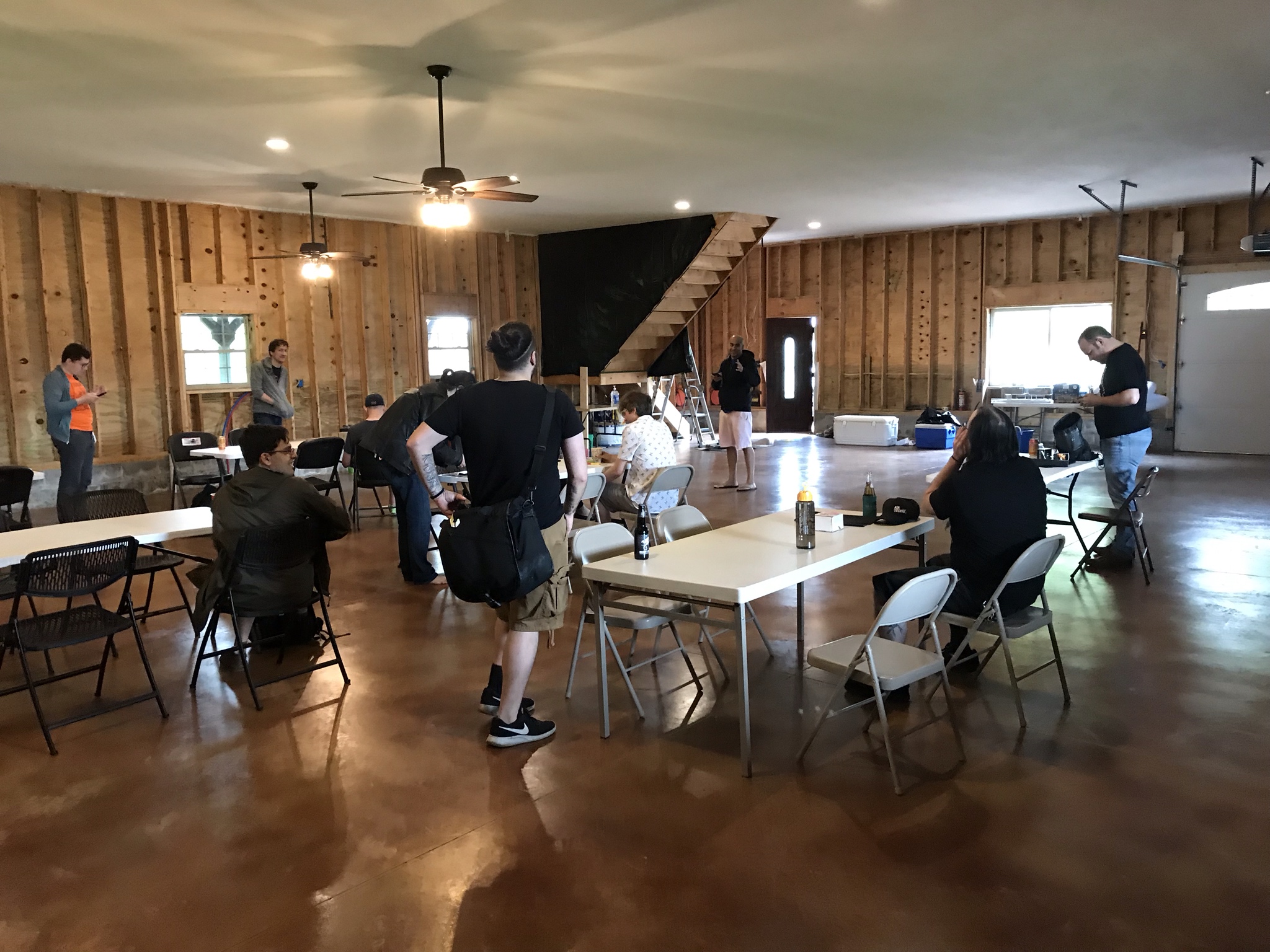 Prizes donated by all the players! 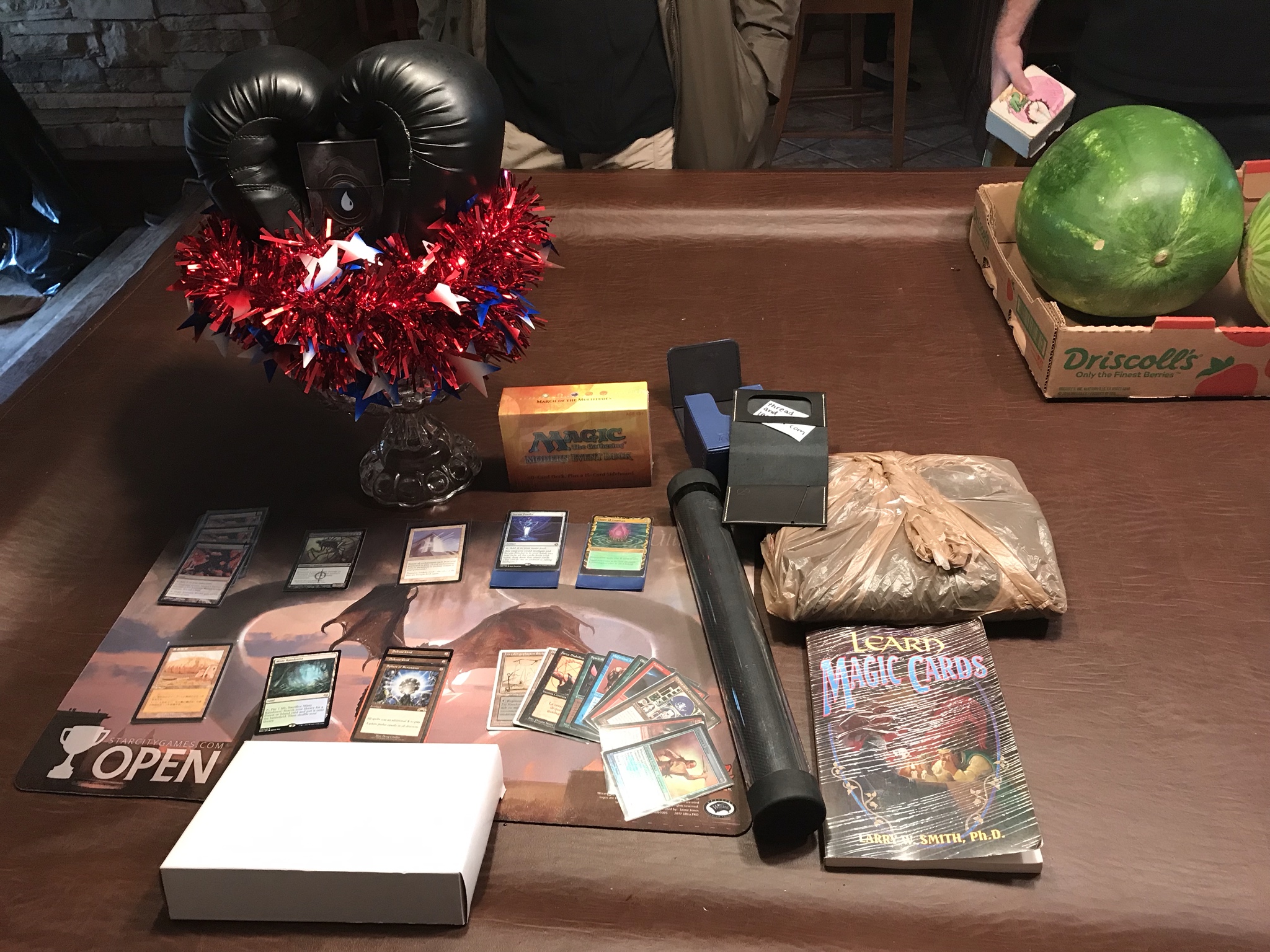 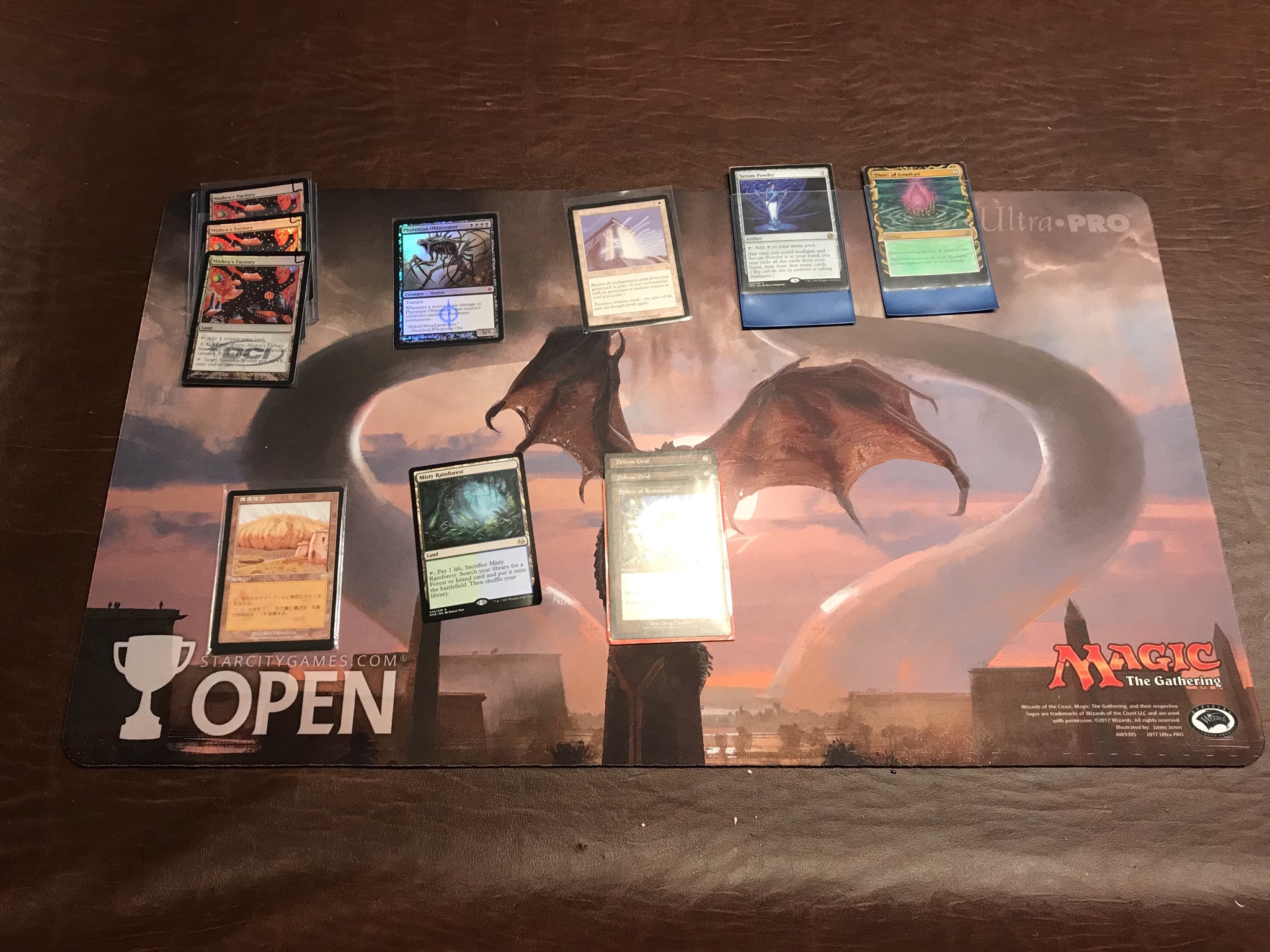 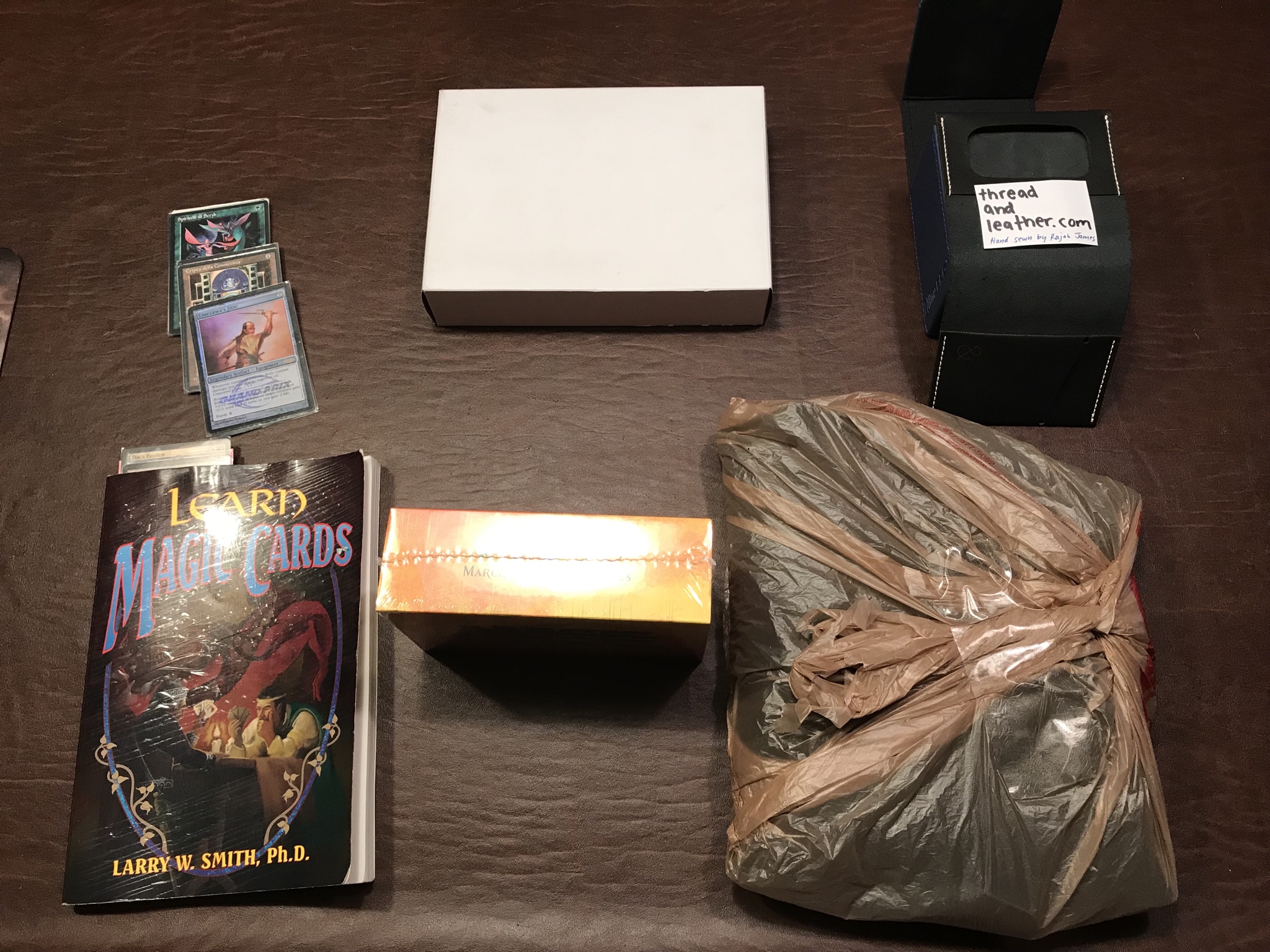 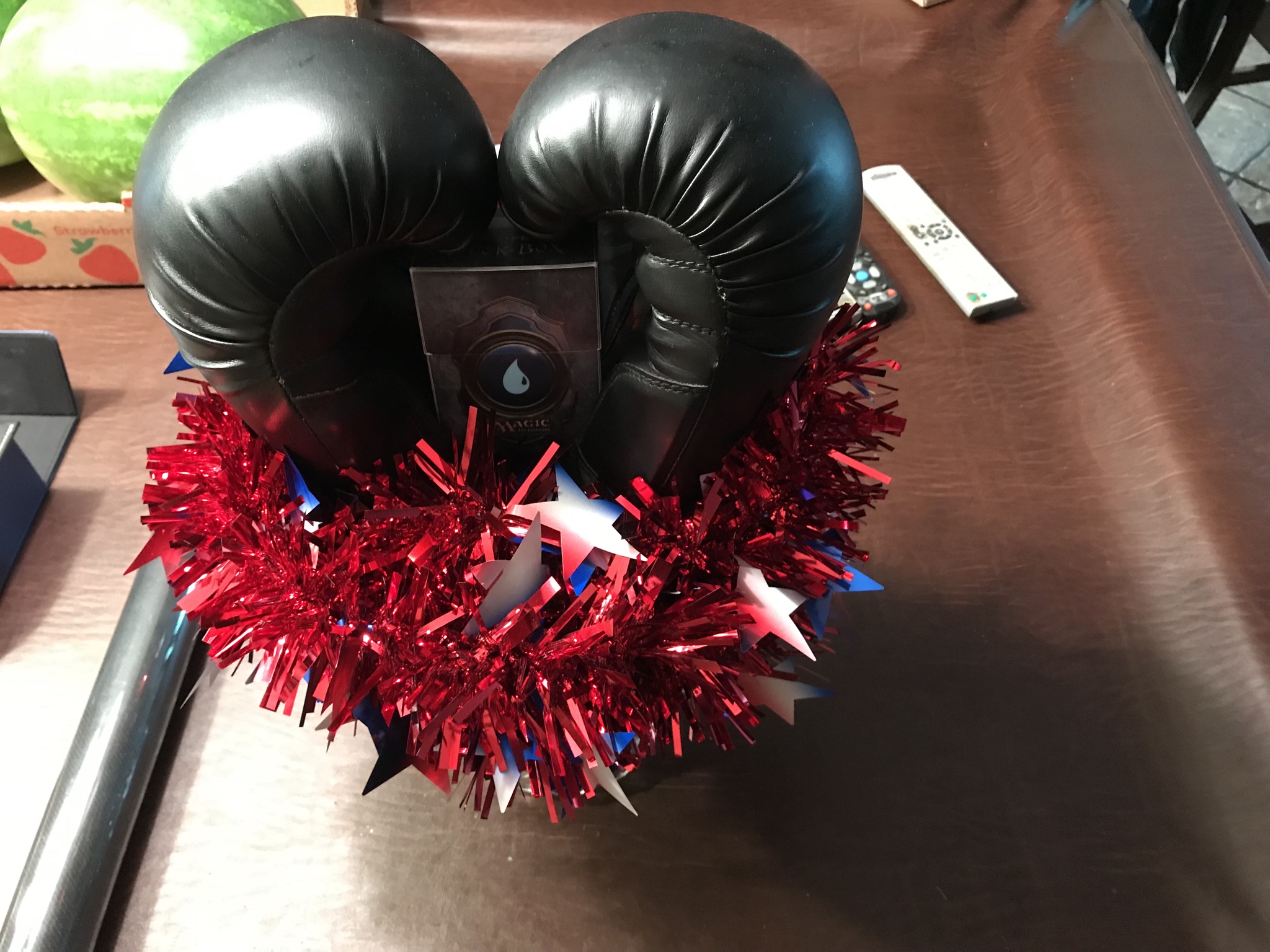 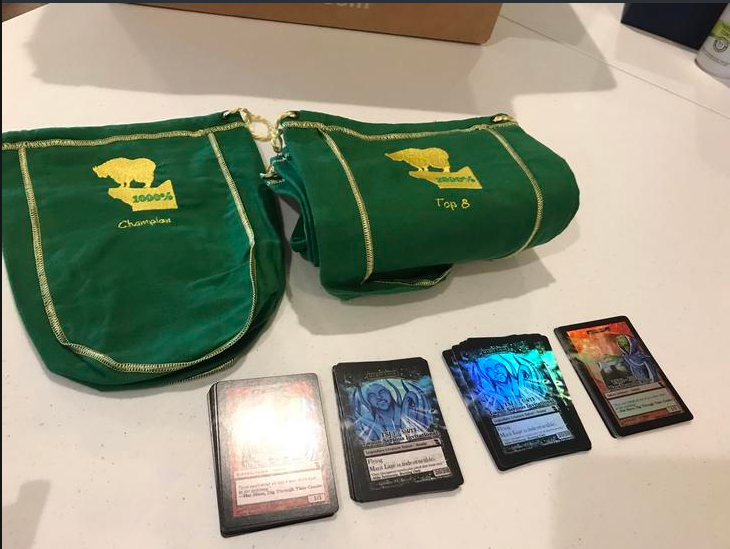 We also asked for $20 a person for charity and donated $350 to the Second Harvest Foodback of the Mahoning Valley.

You can see these pictures and some tournament action pictures here.

After 4 rounds of swiss, the top 8 played out as follows:

Congrats to Andy for his first TSI win!

Top 8 decklists based on final standings:

Thanks to everyone that came out! Hope you had a blast at this Team Serious Invitational! Special thanks to Scott, Dennis and Granny for opening up their home to us and for all the cooking, cleaning and prepping they did for us! Much appreciated!

Hey that's weird... it looks like you don't have a lot of ways to activate your own Death's Shadow - it seems like most decks could play around them if they knew and wanted to. Is that a potential issue in your view?

@ajfirecracker It's really a Survival deck first, with Death's Shadows as a hedge. My gameplan is to quickly win with Vengevines and Hollow Ones, backed by disruption. The Death's Shadows shine when your opponent brings in a bunch of graveyard hate and needle effects and tries to cut you off from using Bazaars and Survivals. Between Thoughtseize, Street Wraith, Mental Misstep and my manabase, it really wasn't too hard to get Death's Shadow live. I tapped Nurturing Peatlands just to float mana and take a damage several times.

Opponent's playing around Death's Shadow is a feature, not a bug! Several of the games I won involved a 1/1 Death's Shadow that prevented my opponent from having any favorable attacks. A deck that need to attack to win, like Ravager Shops, Eldrazi, and Survival, can't really play around it without giving you a bunch of extra time to set up a lethal Survival. Because Shadow keys off of your life total, no matter where the damage came from, they may have to play around it whether it's in your hand or not. In games where you can't get your life total down, they're not as dead as they would be in something like a Modern Death's Shadow deck - Survival decks needs a critical mass of creatures to pitch to Survival, and you can trigger Vengevine with with Death's Shadow even if you're above 13 life, and of course, Bazaar of Baghdad's filtering rewards you for playing with conditionally powerful cards.

Damaging myself was never really a problem, but I could imagine running a handful of additional damage cards making it more consistent. I think the next best cards would be additional Street Wraiths, Mental Misstep, Dismember, but I didn't think any of them were good enough to make the cut over something else. I think Basking Rootwalla is a little less necessary in this list because of the high creature count, so I could maybe see going to 3 Rootwalla in favor of one of those cards. I thought about making the list BUG, but I didn't have enough testing time to figure out how to make the mana work. If I managed to work an Ancestral Recall and a Time Walk into the deck, then Vampiric Tutor and similar cards would be pretty appealing.

Awesome, thanks for the explanation!

Congratulations Andy! My favorite part of your post was the venue. It looked amazing and reminds me of Muskoka here in Canada! Your list looks baller to boot!

I'm playing in my very first Vintage casual tournament this Saturday. Was a bit short notice so not an awful lot of time to prepare. Thought of bringing your list @Brass-Man since I'm a die hard fan of modern Grixis Death's Shadow and the survival shell looks really fun. That and the land base being easier to build

What are your thoughts on this list for a completely unknown meta? Thought of bringing in one Squee replacing a deathrite or rootwalla. Had no issues getting down to 12 life at least turn 2 when playing against a buddy so I'm keeping the DS enablers as is. Did you have the chance to work on it further?

Congratulations, Andy. And that venue looks great; the koi fish too.

@engwar I haven't looked at the deck much since this tournament, but know that @The-Atog-Lord recently played it to a strong finish in the MTGO Vintage Playoff here. I believe the only changes were:

Which seems fine to me, though I probably still like Ouphe over Misstep. I built the list without any particular plan for Oath decks, and I believe @The-Atog-Lord lost to an Oath deck, so there could be some concern there, maybe an additional Abrupt Decay in the sideboard could help? I haven't thought about it too much.

Survival is a good deck for a general field I think. It's linear, but the Death's Shadows make it hard to hate out with any one card. It had a weakness to fast combo decks which are less common now, and has been improved a lot by Collector Ouphe. It has a naturally weak Dredge matchup, but I think you can overcome it by dedicating lots of sideboard space, which Survival can afford to do by having so many generally-applicable cards in the maindeck.

I personally find that Squee, Goblin Nabob is a bit slow for Vintage Survival. You're so constricted on green mana that getting a Squee almost always means getting one less Vengevine in play. In situations where Vengevine is bad, Squee is usually also bad (e.g. against graveyard hate). I do know some very good Survival players disagree with me on this point, so feel free to differ. If you had your heart set on cutting a Basking Rootwalla or a Deathrite Shaman to run it, I think I would cut the Rootwalla.

In the short time since this event, it looks like BUG Midrange decks and Dreadhorde Arcanist decks have gotten a bit more popular, which could make an additional Dismember or Abrupt Decay nice, but I wouldn't go overboard on that kind of thing, you're not going to out-long-game the blue decks, so cutting threats for removal spells will eventually bite you. Your local meta will of course be defined by the preferences of the people in your area, and might not end up lining up with MtGGoldfish at all!

I hope you enjoy the deck, and I hope you do well with it! Make sure you let us know how you perform, and welcome to TheManaDrain!

@brass-man thanks! I bit the bullet and got a manatraders subscription to try it out. Have to say I am definitely impressed! I took your list with:

The squee was never really relevant in any of the matches, but went 4-1. On my first league ever! Lucky with the opponents I got: won 3x xerox, 1x BUG, and lost 2-1 to PO. That last one was in part due to my complete ignorance of the deck, and got the wrong cards using thoughtseize.

I was often lacking a mana or two, so will try with an additional fetch next time. I agree on the ouphes, they were essential in my match win against PO.

Very enjoyable format, I think I'll stick around for a little bit