[M20] Leyline of Combustion
This topic has been deleted. Only users with topic management privileges can see it. 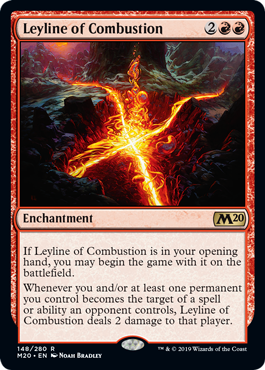 I think every leyline probably merits attention. If you can force your opponent to play a fair match this could do gobs of damage. Probably not a contender in vintage but who knows.

I really like the card, and I can see it as troublesome for multiple archetypes. But in the end, I think that it is too situational for it to see any regular play.

How would this stack against Tendrils? Do they die or just heal back all the damage it deals?

@vaughnbros All the copies go on the stack at the same time, at which time they choose a target and this triggers, and resolves as LIFO. After this, each copy resolves one at a time.

I'm however a bit rusty and I'm not sure if the trigger from Leyline for the original spell would resolve before Storm triggers or not, probably depends on whose turn it is.

Do note that if the Storm player has more life than the player with Leyline, they can target themselves with some of the Tendrils copies to stay at the same life total without triggering Leyline.

I'm however a bit rusty and I'm not sure if the trigger from Leyline for the original spell would resolve before Storm triggers or not,

Leyline triggers and deals 2 damage to the storm player.
Storm trigger goes off, say 3 copies. A target is chosen for each copy and goes on the stack, each of which triggers leyline.
The stack is now: