[MH1] Mirrodin Besieged
This topic has been deleted. Only users with topic management privileges can see it. 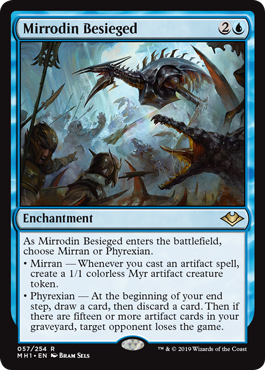 The power of an entire set, in one card! Mirran side is kinda neat but probably worse than the existing "when you play a <qualification> spell, make a <token>" cards. The Phyrexian side though... that seems kinda not too hard to pull off, maybe? Looks fun.

Is it better than storm stuff, though? It's immune to Flusterstorm but weaker to FoW.

The condition seems trivial to meet with most aggressive combo decks or even a random Hermit Druid. Is a Hermit Druid shell better than just playing Dredge, though? Paradoxical Outcome boarding in 4x Druid, 4x Narcomoeba, 1 Dread Return, 1 Sun Titan, 1 Mirrodin Besieged is...certainly a response to rods and Thalias. Is it good, though? Oath isn't likely to both have the artifacts AND want this over Griselbrand.

Most PO deck play around 16 artifacts, it will be hard to put all of them in the graveyard.

But seriously this is very pushed. The fact that it is End of Turn and that you don't have to wait a full cycle is not at all in keeping with most of the I WIN cards they print.

Not sure if it is vintage viable but in legacy you can play Urzas and Mishras baubles to accelerate, 4 leds and 4 of the new time twister and possibly make this happen turn 0.

You have to survive a draw and discard, but I guess Blightsteel works with Hermit Druid in your Outcome deck. Gives you a strong alternative plan to trying to win through the 4 Null Rod effects and all the artifact hate.

Just put this in play before you activate Druid. This card functions as a Merfolk looter in the meantime.

It makes me want to build a UR welder bazaar shop deck. Not sure if it will be really competitive but definitively fun.

Mud deck with a light blue splash for ancestral recall, maybe timewalk, master of etherium. Play this, sac all to revoker. Win.

This has probably some good use with Krark-Clan Ironworks.

Why Hermit Druid? I think @Tittliewinks22 has the right of it. Put it in Oath along with Sun Titan.

Combo with mycosynth lattice? We have karn to grab it, but maybe some amount of ML is maindeckable now too with neat new artifact destruction cards and a 3 mana enchantment that says your whole grave is artifact and you win. Could be interesting!