[MH1] Plague Engineer
This topic has been deleted. Only users with topic management privileges can see it.
C
C
Cuikui Reply Quote

Because @ChubbyRain is waiting it 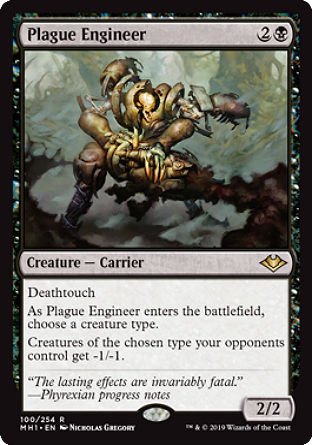 As Plague Engineer enters the battlefield, choose a creature type.

Creatures of the chosen type your opponents control get -1/-1.

He answers the token generator like Mentor and Young pyro.
He weakens tribal deck like Human, Eldrazi etc
He can be a 1 for 1 answer to specific 1 toughtness creature like revoker.
He can attack.
He can chump block.

So which deck want him, Survival, UBx control ?

Survival surely do, I think instead of trygon in the bug version. I guess it's all about what Other decks have a hard time fighting. The more tutors for it the better, but maybe some decks would even want copies 2-3 out of the sb. Hitting only enemies and having deathtouch makes it way better that engineered pague IMO, unless it's against a deck where it's lights out (in vintage I think this one is better).

I'm very excited for this one. One of the main weaknesses for Hatebears is Mentor and, to a lesser extend, Pyromancer. And, as the opening post mentions, it's a great utility card against Revoker, constructs and especially opposing humans. I think it might even be worth trying out maindeck.

I was curious about the creature type Carrier, and turns out this is a nod to the Urza's Legacy cycle of creatures that give -X-X. They even used the same reference in the flavor text. I love when they add little details like this

In my defense, it’s always interesting seeing what cards get threads and what cards do not.

The asymmetrical nature of this card opens it up to use in Pryomancer decks as a mirror hoser. Bug fish has also historically struggled against Pyromancer. Being black means you get tutors for virtual slots. It’s a pretty high impact 1-0f in these decks that as noted is not dead against larger creatures.

The more I think about this card, the better I think it is. As usual, I'm strictly speaking from a Hatebears point of view here, but the fact that it's decent to good in almost all matchups (Storm and Oath being the exceptions) makes it very appealing as Hatebears rarely stumble upon cards that are good in most matchups, which creates a lot of variance and makes sideboarding rough. Revoker, Thalia 2.0, Scavenging Ooze, Deathrite Shaman etc. are examples of cards that are good, but often not great, in a lot of matchups while cards like Kambal, Sanctum Prelate, Stony Silence etc. are examples of cards that are great in some matchups but almost dead in other.

Against Xerox this is a powerhouse that must be answered or else Xerox simply can't win. The fact that it kills Snapcaster is very important, as it let's you attack in with creatures you would otherwise hold back.

Against Eldrazi making their creatures smaller actually helps a lot as the main reason why Hatebears has a bad Eldrazi matchup is, well, that they play bigger creatures. The deathtouch here is of course huge.

Against Shops this has a lot of utility depending on the board state. Blanking Revoker to free your Deathrite Shaman or Mox sounds good, as does instantly killing Overseer while making Hangarback, Ballista and Foundry Inspector less scary.

Against BUG this is also a nice utility card that deals with Tarmogoyf, which is the one problematic card in that matchup.

Against PO and other Storm decks, this obviously doesn't do anything unless they play Mentor. Mentor is one of the harder cards to beat, though, and since those decks rarely play many different win conditions, I think this could even stay in post board.

I already play Engineered Plague in my Black deck's sideboard and this is a strict upgrade. That Deathtouch is hot.

Man this card would have been great when mentor was a 4 of, it is the one card answer that deals with everything that sulfur elemental almost was.