[MH1] Lesser Masticore
This topic has been deleted. Only users with topic management privileges can see it. 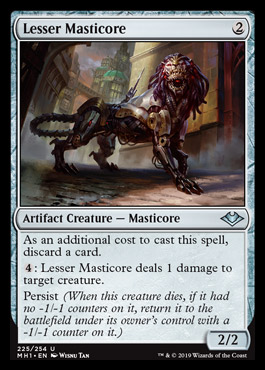 Lesser Masticore - 2
Artifact Creature - Masticore
As an additional cost to cast this spell, discard a card.

Persist (When this creature dies, if it had no -1/-1 counter on it, return it to the battlefield under its owner's control with -1/-1 counters on it.)
2/2

Hear me out on this one because I know this is a bad card. I just wanted to notice that there is an 8-Welder deck that can come up once Modern Horizon hits us (Goblin Engineer). This is a 2 mana discard outlet that's also a double sac outlet for Welder/Engineer who also blocks/attacks and can ping opposing creatures sometimes (it won't come up too much because 4 mana is just too much).

It doesn't have any immediate application, because the Welder/Engineer deck is just theorycrafting, but I feel like this is a great 2 or 3-for-1 there. It feels very similar to Ichor Wellspring or cards like that but a bit better for it has more flexibility of roles.

I just posted here instead of inside Goblin Engineer's topic because maybe there are other applications I didn't see, but I don't think this can see play outside that specific deck. Should I've just posted it there?