[MH1] Force of Negation
This topic has been deleted. Only users with topic management privileges can see it. 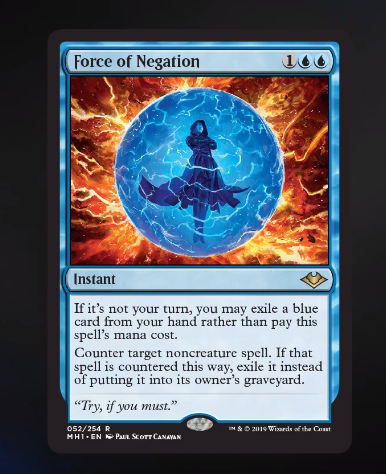 Looks like the Modern Horizons spoiler season has begun. I am not sure how best to evaluate this card. Obviously this does a great Force of Will impersonation which will be Modern legal and will probably see play there, but I am no expert on Modern. However, does it have applications in Vintage?

The fact that it's easier to hard-cast is something, but only being usable on your opponent's turn reduces the card to a purely defensive one. Then again, we've had decks in the past that have loaded up on Pitch counters beyond the 4 Force of Wills (such as Landstill) where this could see use.

Thoughts? This is definitely an interesting and clever printing by Wizards. Personally wish this didn't have the non-creature clause though...

Combines Force of Will and Negate.

Yeah, I just see this as too narrow to be played maindeck in Vintage. Maybe as a one-of. You can only have a certain critical mass of pitch counters before you just lose the card advantage equation; especially if we're talking from a mostly defensive position.

Could have a home in the sideboard... I guess it also helps push through your Ancestral in opponent's upkeep.

My post on twitter was that I thought a Mental Misstep restriction was a lot more reasonable now. This is the type of card that stops combo and broken turn 1's without feeling like it oppresses more fair decks and it has more consistency than MBT and Fluster. The opponent can't turn 1 a Duress, take Force, and play around this like the previous two.

There is some concern that PO can use the spell to protect a PO on the opponent's turn while using this as additional Force of Wills for Narset, Karn, Rod, etc, but we'll see. I definitely like this printing.

The added exile clause is a nice bonus given the sheer power level of individual cards. Dunno if that'll matter for much, but it's there.

This seems potentially format breaking. With this and 4 force of wills you now have a 70% chance of opening on turn 0 counter. Extra copies pitch to itself just like force so the downside is mitigated. Add in missteps and/or MB traps and that can push much higher.

@cambriel In a format with restricted cards and Snapcaster, JVP, and Yawgmoth's Will, I think it matters a lot. For instance, exiling Ancestral is huge in the Xerox mirror as decks tend to run 3 or more Snapcasters and it's the best target by far.

I also think being a 3 mana counterspell is somewhat underrated as I've definitely cast my fair share of Force of Wills and Mindbreak Traps.

Anyone who does not think they need to own 4 of these is a loon. It won't be in every deck, but it will be in a ton of them with good reason. There are simply matches where this is better than FOW, though once again shops is the outlier.

I also think that with this printing a restriction of FOW or MM is viable in vintage, not to mention legacy.

Legacy would mean a ban, which would be wild. The format would look very different without free counters on the offense. Thalia stock would go up too.

I like this the more I think about it. It's not just a functional reprint, there's a real choice here in terms of which card is better for different formats.

this card pitches to force of will, it's likely playable.

Yeah this card is on my short list now of cards to keep an eye on for a future article.

Even if this does not make a full 4x in blue decks, its very easy to imagine extra pitch counters that are less narrow than something like disrupting shoal being run in sideboards or as counterspells 5-7 over some of the more narrow U options like spell pierce. Certainly this is a better option to a sphere against shops than disenchant and hoping you get the mana for it.

It does put real stress on a players card count so it could also lead to card draw that does not see that much play getting a little more attention as well.

Every Vintage player should set a reminder on their phones to re-read this thread in a year. Our takes on this card will likely be good entertainment.

Anyway, could be fine, could be great. My initial impression is that in Xerox, you probably want 0-1 copies; not sure the deck can really afford to 2-for-1 itself any more than it currently does with FoW.

Can we still call FoW “Force,” or will that create confusion?

This card seems incredibly well designed for its purpose. It appears they were trying to incorporate the combo fighting Power of force of will into modern without allowing people to use it to protect combos. They did so in a very narrow way.

I'm not sure this card actually matters at all for vintage because with excess to four forces of will, how many decks actually need another four cards to protect themselves from broken combo? What decks in the current meta have a huge problem dealing with combo? Those decks might have some number of these in the sideboard

This is a better pitch counter than Misdirection, and it already sees play. I really like that you can hard cast it (for not a whole lot more than Mana Drain).
I think this will replace Mindbreak Trap in blue decks.

Its a great card!

@maximumcdawg this is a vintage forum, but I'll point out that for modern this does little to stop creature-based combos, albeit not protecting them either usually. not sure if that is fully the intent or not.

How many more decks do you need? There is only one deck in the format running oath of druids and forbidden orchard but it is likely if they could have 5 they would. Narrow does not mean bad nor does it mean its not going to be a staple.

@protoaddict if you read my post carefully you'll notice it's a question not a statement.

Although the card has the laziest name (FoW + Pact of Negation) it's a pretty clever design. I like it a lot. Now, this makes Teferi, Time Raveler even better. Being able to combo, Tinker or whatever during your opponents turn and have more ways to protect it seems relevant.

I think it’s much closer to a 4-of in other FoW decks than a 1-of too.