[WAR] Return to Nature
This topic has been deleted. Only users with topic management privileges can see it. 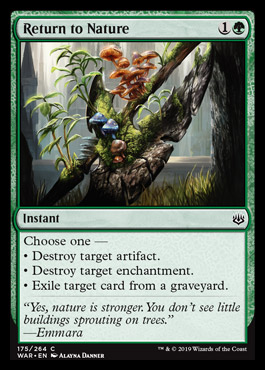 So, an upgrade to Naturalize that has an extra advantage over Nature's Claim. Even with Misstep, Naturalize never saw play over Claim. Is removing one card from the graveyard good enough to change this? Probably not, right? I mean, taking 1 card from Dredge does nothing, Reanimator is not a thing in Vintage, Oath doesn't use Snapcaster and Shops doesn't use Crucible. I think the only reason left would be to eventually counter a Snapcaster in PO, but you're not bringing Claim against PO, are you?

Anyway, I think it's a good card to note and know exists.

Eh, I like this card. I've been playing Disenchant in UGW Xerox and it's been perfectly cromulent, even if I wouldn't defend it as absolutely optimal. Occasionally telling a Snapcaster Mage to go pound sand is a nice bonus. Nature's Claim is probably still better but I'll probably play this as a maindeck fun-of anyway.

@craw_advantage yeah, it's not a game changer, just something I thought people might miss and that has an interesting new effect.

It is a strict upgrade to Naturalize, which up until this point has been the baseline for green disenchant effects to the point we actually call them Naturalize effects.

So at the least we should be calling them "return to nature" effects now as there is no reason to ever run Naturalize again. I think the real question in situations where you want this effect will also often be is this better than deglamer.

Exiling a single card gives this applications against Dread Return and Snapcaster effects, but I don't think that really changes any of the calculus as to whether you want this vs Nature's Claim.

This card is potentially the first main-deckable graveyard disruption that has an element of surprise, which might open up new tactical scenarios. The storm player facing down Deathrite Shaman knows to be careful when firing off Cabal Ritual or Dark Petition; otherwise he knows that he is highly unlikely to run into Ravenous Trap. But with this card the risk of surprise graveyard disruption becomes higher.

@ajfirecracker @protoaddict I will continue to call them disenchant effects.

This might actually have the most utility vs survival. Obviously you hit survival with the enchantment mode. But you can hit Hollow One with the artifact mode and an untriggered Vengevine with the grave mode. Pretty solid I say, and potentially maindeckable.

There are reasons not to run natures claim.