[WAR] Tamiyo, Collector of Tales
This topic has been deleted. Only users with topic management privileges can see it. 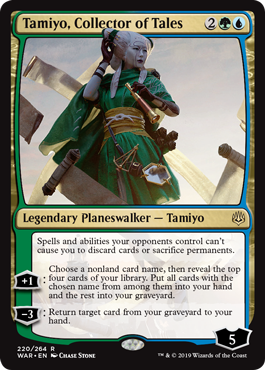 This does a lot of funky stuff in one card. In casual play there is a large part of me that wants to abuse this in a deck with tons of copies of shadowborn apostle. But in vintage with all its singletons it becomes more of a +1 draw one you have to build around. Works well with Sylvian library and Jace, but you would run Jace first to be sure.

It does have the ability to come down on a timewalk turn and get you back the time walk, then be ready to do it again the turn after, which is nice, but regrowth already does this for much less so I can't see that being a big deal unless you can really make use of the +1.

The Anti Sac and discard is probably a novelty, since thoughtseize would have hit you long before this.