Modern Horizons - Cabal Therapist
This topic has been deleted. Only users with topic management privileges can see it.
?
?
Guest Reply Quote

Obviously, this set is a great direction for Wizards to continue to develop the eternal formats and a much better way of doing it than Commander and strangely designed conspiracy/battle bond expansions.

Only 2 card have been spoiled/leaked so far. Let's not focus on the awesome implication of sets designed to create new archetypes in Eternal formats and focus solely on this new card: Cabal Therapist will look strikingly familiar to most vintage players.

Obvious first implications are that dredge gets MORE cabal therapy effects. But it cannot be cast from the graveyard. Would this enable a deck like Nic Fit in Legacy to have enough cards to become a playable deck in Vintage (Nic Fit abuses Veteran Explorer)?

The obvious difference between the two is cabal therapy gets cast from the graveyard, and can immediatly be cast again with flashback. Whereas Therapist can be used every turn, but provides no immediate information. 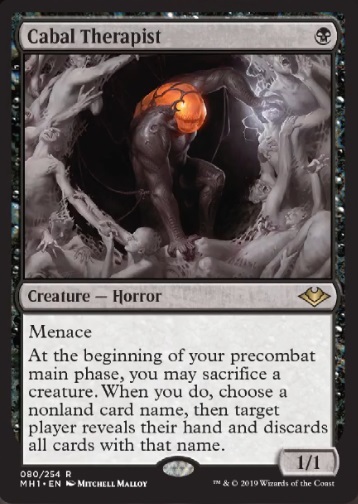 I see several drawbacks for that card :

So i am not really optimistic about its use in Vintage. I agree that it may be interesting in a deck that is currently under radar but i fail to see which one yet.

Card seems solid to me. Mono black was a decent deck at some point and presumably this set will have a lot of Time Spiralesque cards in it.

1/1 menace that can be cashed in or turn tokens into value is very promising if you ask me.

In general Cabal therapist is much slower that Cabal therapy, you need 3 turns to do what cabal therapy can do in one turn. And he can't be cast freely from the graveyard. That's why most deck that currently play cabal therapy will probably no use Therapist.

But I see two good points to Therapist

This card is really really good. This is coming from someone who plays 2-4 Cabal Therapies, Dark Confidants, Monastery Mentors, and other utility black creatures out of the sideboard. It’s unfortunate that the effect can only be used once per turn, but it DOES have menace, which combined with Bobs, supports the aggro plan.

Good, not great card. Could see some play, but probably not in Dredge. This is better with token producers. Better against an empty hand too since it does something.

It does combo well with Pyromancer/Mentor.