[RNA] Pteramander
This topic has been deleted. Only users with topic management privileges can see it. 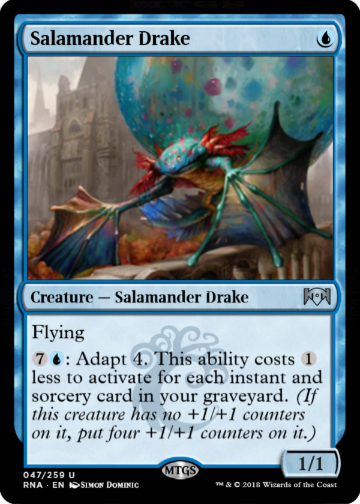 I really like this dude. He reminds me of Delver in a lot of ways with some different nuance to it. It's harder to activate, much bigger, costs mana, can be activated at instant speed and if needed multiple times in response, the 1/1 body has flying, so on and so on.

I'm not sure if he fits in a world where we already have delver, pyromancer, and thing in the ice, but I cannot help but think there is some potential here.

Hum, I don't think Delver is even good right now in Vintage. The bad thing with this guy is that it takes a while to set him up early game. The good thing is that mid-late game he's a 5/5 flyer for UU. I don't know where to put him... Delver started seeing play in Vintage as a blocker for Lodestone that could end the game on the air later on.
BUT, if you can adapt this guy quickly, he blocks almost everything in Vintage profitably, right?

Yeah this gives me a mix of delver and angler vibe, and I am ready to be impressed. The other somewhat reasonable point of comparison is Bedlam Reveler but UU instead of RR. I have tried to make reveler work in Vintage, though admittedly he has a draw 3 stapled to him.

I think this creature is worth testing.

I think this little blighter has promise, though it's Delver itself seems super fringe at the moment. This guy synergises with Drain for its worth - maybe there's some mono-blue tempo deck out there?

I mean it is a prime target to be pinnged, but if you can get it to 5/5 then yes it'll close out a match.

Yeah this gives me a mix of delver and angler vibe, and I am ready to be impressed. The other somewhat reasonable point of comparison is Bedlam Reveler but UU instead of RR. I have tried to make reveler work in Vintage, though admittedly he has a draw 3 stapled to him.

I think this creature is worth testing.

I think bedlam is different enough in enough vectors that the comparison falls flat. I look at this more like angler that does not destroy your yard and can still be played under a rest in peace. Reason I like it is because it does not remove targets from the yard like delve so it leaves open other lines of play.

My biggest reason to notice this card over delver though is simply lightning bolt. Bolt with snapcaster is likely still the best answer to delver, pyromancer, etc, and even though this take slightly more effort it fully dodges it.

This sounds really nice. You may sometimes pay 2-4 to activate the hability, it's not a "you must have 7 instant/sorceries to activate". And having it as a 1/1 beater with evasion for U until you are able to activate it is really nice. It's kind of a tombstalker that doesn't require you to remove your cards from your GY. And that's pretty relevant on this format of delve/yawg will/snap/etc.

Personally I don't like delver in vintage, but as there are decks with delver with some results (can't say if they are good or not, but they are there), there may be a deck where this card can shine. Maybe a deck with both reveler and this one? With RIP/leyline it would at least still be playable as a pinger.

I mean it is a prime target to be pinnged, but if you can get it to 5/5 then yes it'll close out a match

That's a problem Delver also has, right? This can even dodge that if you have more mana to activate it several times.

@fsecco my presumption is that against shops you will always lead with delver and make them have the pinger since you are at the mercy of topdecking.

This guy arguably you could sandbag until you can play and activate him in one turn, I just don't think its specifically better since if they do not have a pinger delver can be a bigger clock. If you are on the play and get a delver down and they kept a hand heavy in sphere effects and not game enders, Delver may get you there faster than this guy can.

With my luck flipping Delver of Secrets, I would say this card is strictly better.

@protoaddct I agree with this take - this probably isn't better against Shops than Delver, as it's almost certainly slower. Either Foundary Inspector/Ravager hands will kill you before you fill your yard, or Spheres will stop you casting seven spells in time for it to be revelant.

This can also be Revoked so maybe it's really not that great against Shops.

Just one thing on Delver/Salamander x Ballista: if Ballista isn't in play, you can play and activate this before your opponent gets a chance to ping it.
Just adding to the pro-cons table

Comparing this card to Delver is pretty errant. Delver ideally gets played on turn 1 and flips on turn 2-3 if you aren't @Brass-Man. This card isn't as aggressive as it takes time to build up the critical mass of instants and sorceries. And without the upside of a quick Delver flipping, you will have better things to do than playing a 1/1 on turn 1...like holding up a counter or cantripping to set up the card later down the road.

This card is functionally much more similar to Gurmag Angular and Tasigur than it is to Delver. A mana efficient mid-to-late game threat that has synergy with spell-heavy builds. Unlike the Delve creatures, it is in a better color, does not have the same diminishing returns, and evasion matters. The cons are that it will be slower as it doesn't have synergy with fetch lands and other card types in the graveyard, as well as requiring more overall mana.

I think the primary home will be in Legacy. As a starting point, take a Grixis Delver list, remove Black, and add Thought Scours to the cantrip package (obviously this is a rough draft):

For Vintage, the issue is the conflict with the delve spells, along with the issues others have brought up.

For Modern, it would take pretty significant metagame changes for this card to see play as Phoenix is more explosive and Dredge leads to significant graveyard hate. (Oh, and Gut Shot has made an unfortunate comeback...)

@chubbyrain agreed, this card screams legacy to me. I don't know if it is actually better to cut black and angler for this, but that's not the forum to discuss that I guess.
If this card would just be a common...

Obv you just cast Wheel of Fortune turn 1 every game to make him a 5/5 turn 1. Duh guys, geez.

After trying to play a bunch of these "costs less if a specific card type is in your yard" cards, I have to say, I don't think any of them are actually playable. I guess at least this one you can play as a Flying Men though.

@ChubbyRain I bet you this card will find a home in one of the Phoenix decks in Legacy. It seems like the perfect shell with low to the ground threats, lots of spells and a big GY.

This card has some potential but i am not sure it is for Vintage. Actually, i would compare it to Tombstalker that does not see much use en Vintage.

@albarkhane Yeah, it's a harder to cast tombstalker in a better color, with the upside of not needing to exile your GY (which means it can be played in multiples, like bedlam reveler) and that it can be a Scryb Sprites if you got hated out. It's a Bedlam Stalker. Tomb Reveler. Tombstalking Reveler. Something like that.