[RNA] Dovin, Grand Arbiter
This topic has been deleted. Only users with topic management privileges can see it. 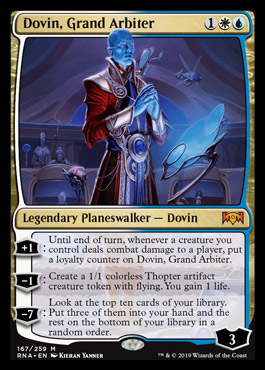 Well, if we're actually speculating about Lavinia Humans, there's a chance Dovin is good. It's on color and ultimates fairly quickly in a creature heavy deck. If you have 3 creature he ultimates in 2 turns. Chances are, though, that Dack Fayden is just better anyway.

I at least like the return to cool ultimates that aren’t necessarily game ending like: “gain 20 life, draw 10 cards, and gain control of 5 target permanents.”

Meh. I just don't think it does enough compared to every other 3 color walker. The ultimate is a big DDT, but DDT is likely easier to cast and get to. His +1 only supports his ultimate and if you want to make thopters there are better ways.

Put in a u/w landstill deck with Moat.

@protoaddct not saying this card is any good, but doesnt his +1 support his -1?

@aelien actually his -1 supports his +1, which in turn supports his ultimate. It's... clunky. The only way Dovin sees play is if we actually get a UW heavy Lavinia Humans that can't support Dack. Even then, I'd say Recruiter of the Guard is probably a better card for the slot.

Got a 5-0 with 2 copies. He's actually pretty reasonable.

Eh, Planeswalker cards have such a high base powerlevel that you can stick a miser's 1-2 copies in any reasonable shell and they won't be terrible.

That doesn't mean you couldn't strictly improve your deck by replacing Dovin with a different 'walker like Dack.

That ultimate ability is nothing to sneeze at in the right deck. Dack, as good as it is, doesn't give you actual card advantage, which Xerox decks often find themselves lacking. You could use both Dack and Dovin, since they are both cheap for planeswalkers.

If people actually want to discuss the card and the deck I ran, here it is:

I think people are trying to play it in the wrong shell - you don't get any more loyalty for spending mana on your creatures so tokens are a natural fit and Young Pyromancer is the best non-restricted token generator in the format.

I also think people are underestimated Dovin's token making ability. While not a key role for the card, it can function as a blue Bitterblossom. Make two tokens, attack for 3 loyalty, make 3 tokens, attack for 6 loyalty... The damage adds up to a reasonable clock: 1+2+2+3+4+5+6 = 6-7 turns depending on incidental damage. Or you can plus and ultimate 2 turns after making 2 tokens. The nice thing about the token making approach is it plays around pyroblast...they still have to deal with the fliers in the air.

I think the card has applications in Legacy as well, but hey, I'm a madman that throws random planeswalkers into decks, yet somehow still wins, so what do I know...

Played more games with Dovin. I went 3-2 with him in a Legacy Stoneblade deck and he was actually quite good. Being able to throw a sword on a random thopter is solid and he makes your creatures more threatening if the opponent Thoughtseizes or destroys your equipment. I think Dovin will end up being more of player in Legacy. The token making ability is more consequential in that format.

I went 2-3 with him in Vintage with the first two matches me kind of getting nut drawn (Brian Kelly turn 1'd and turn 2'd me with Academy Rector. It could not have been more brutal). Turn 1 Dovin won a game against White Eldrazi where the Thopters punished the opponents painland manabase and the lifegain took me out of double Reality Smasher range. Game 3 I took a screenshot to show that you can play Dovin and Dack (and why a diverse set of planeswalkers will generally be better than in other formats). The final match, Dovin was literally my only out to a turn 1 Moat with double counterspell backup. Unfortunately I drew nothing but lands for the majority of the game.