North American Eternal Weekend 2018 Metagame Breakdown
This topic has been deleted. Only users with topic management privileges can see it.

376 players showed up in Pittsburgh to play in Vintage's most prestigious event of the year. The tournament ended with the matchup most emblematic of the past few months: Paradoxical Outcome versus Ravager Shops. Congratulations to Brian Coval for becoming our new North American Vintage Champion! 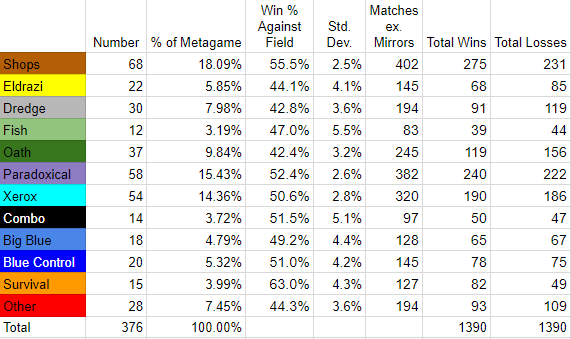 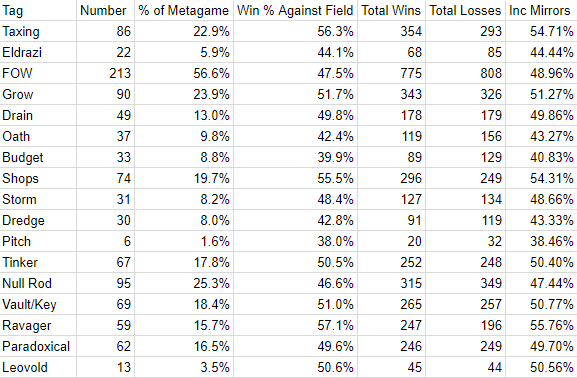 Although I have my complaints about the current state of vintage, that's quite the diverse top 8 after last year's!

Even though it didn't win the event, the story of the tournament for me was Survival solidifying itself as a real force. There are at least 3 builds (Bant, Bant+R, and BUG) all with their advantages. The winrate here likely overstates its power slightly: a small group of dedicated pilots came with it, and due to the price of the deck I imagine many skimped on hate and practice against such a small expected share of the metagame.

Classification notes: "Other" was mostly monored, but there weren't quite enough to warrant breaking it out as a separate archetype. If you have any objections to how we classified your deck, or spot an error, send us a PM.

Thanks as always to @ChubbyRain for his considerable help, and to @Jaco for scanning the decklists so soon after his Old School tournament concluded!

Major victory for the folks in the survival thread and further proof that Magic Online has a huge role in driving the format forward. The deck and Bazaar have been 50% of my matches recently in Vintage leagues.

This is really amazing stuff. The match sample sizes are enormous in many cases, giving far more credibility than we could ever get from MTGO challenges alone.

I'm in striking distance every year, but this may have been my best estimation ever.

Re: the metagame. Not only do none of the major decks have dominant metagame presences, but none have dominant win percentages either. This is a very balanced Vintage metagame. I am enjoying it greatly.

I would not have gotten to x-2 without the work of @kaluma , @wfain and @GutoCmtt Props to them for breaking the format as much as it has ever been broken.

Great analysis. In the last chart, where does Survival fall? Taxing?

What abysmal win rates for Dredge and Oath (and budget). Oath was a mixed bag of win rates by matchup, but Dredge just lost to every other deck except Big Blue.

This is great stuff. Thanks guys

Great work as usual, gentlemen. I am really enjoying this metagame currently, and had a blast at Vintage Champs this year. So as to not create another distinct thread with Vintage Champs 2018 results, here is the full Eternal Central report with ALL DECKLISTS and so forth (mods can break this off in to its own thread if necessary for some reason).

It looks like the embed was using the correct link, but the download was last year's file. It's been updated and corrected. Thanks for the heads up. Enjoy.

Update: Eternal Central is a wonderful resource. For those curious, they show 23 Eldrazi decks (as opposed to the 22 listed above). They break down into:

I'm not a stats guy and don't wanna falsely report match win percentages, but my impression is that there were some high-performing unpowered decks, but lots of poor performances (which shouldn't be surprising, if there were lots of pilots who never play Vintage and threw the deck together for the hell of it). Powered White seemed solid, would love to know the overall win percentages.

Thanks for this amazing work. We should be really greateful people like you and all those who have helped with this titanic task take so much personal time to make sure the information is shared for all players’ benefit.

Btw which is the difference between Big Blue and Blue control decks?

@diophan insane breakdown! A correction on my entry

I didn't play Force of Will. Also my entry is the only one listed as Rod and not 'Null Rod' which may be messing up some tag counts. I didn't play Rod of Ruin as sick is is vs. the field.

I also noticed Leovold was a tag, I played 2 x Emmisary's of Trest.

Thanks again for putting this together, it's the single best view of a paper sanctioned meta we get each year so for those of us who don't play online it's a massive help.