SOI Prized Amalgam in Dredge
This topic has been deleted. Only users with topic management privileges can see it. 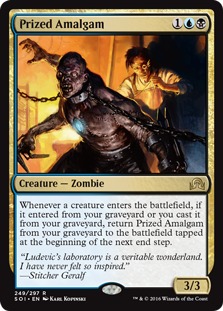 Does anyone think this belongs?

"tapped at the beginning of the next end step." I'll listen to the dredge pros (its one deck I've never played myself). But my gut says since most of the time they are trying to win with haste then attack, this card falls short.

it doesn't help with your dread return draws but it certainly pairs well with ichorid and bloodghast in the grindy games dredge often gets into.

If Dredge activates Bazaar at the end of the opponent's main phase rather than end step, dredges and hits a Narcomoeba, then on the opponent's eot Amalgam will pop out. What are the dangers of dredging during the opponent's second main phase? And is it worth having the extra body?

There have been times where I'm one non-token creature short to make enough zombies to alpha with a DR FKZ, and I'm sure it happens often, but then what do you cut to add Amalgam? Probably worth putzing around with, at least. Oh, I guess you could also add that new land that pops out for 3 generic, which could return Bloodghasts, also end-of-main-phase, to return Amalgam, but again, what are the cuts?

@jimmycolorado idk, I don't even know what the current lists play. I know there has been some debate between kolaghan and FKZ.

If Dredge activates Bazaar at the end of the opponent's main phase rather than end step, dredges and hits a Narcomoeba

This brings up two serious points that aren't necessarily intuitive.

Now, where this card could see some play is in Pitch Dredge. As it's an additional blue card to discard to force of will.

I like the card, but I'm not sure it has a place in a lot of builds. But it is nice to see Wizards add a little more to the mixture.

@gkraigher Knowing nothing about how to pilot dredge, I'll note that it's also black and that Unmask also exists.

I do not know what I would cut from my build to accommodate it as it seems like something you would want as a 3 or 4x, ...on MODO I would far prefer Leyline of the Void since it wrecks storm game 1 and keeps ravager shenanigans from messing with your Bridges. Worth noting that it does not say "non-token" creature...so would this trigger off of a Bridge token?

@p3temangus no, tokens do not enter from the graveyard.

I don't know his list but Ryan Glackin just made the finals (not sure if he won or not) of an event with Prized Amalgam in Dredge. I think its definitely an idea.

@msg67183 They split the finals. I'm pretty sure he never dropped a match.

@msg67183 They split the finals. I'm pretty sure he never dropped a match.

Definitely one of the best blue cards dredge can play.

Here is the list I am planning to test on MODO this weekend...This list is pretty aggro, I feel like you have to run with 4 unmask OR 4 Leyline MB at least to deal with all the Storm online. I am going with Unmask for now because it has more utility g1 against decks that play through Leyline like Mentor and Delver. I am trying Ancient Grudge for the first time, I know it get's hosed by Cage game 2, but I still want to try it out in the maindeck, it could easily be a Natures claim or Chain of Vapor.

@gkraigher It's best played with Force of Will.

I don't know his exact list, but this is Glackin Piloting it: https://www.twitch.tv/fire_and_dice/v/62413344
Looks like Missteps to get to the requisite 16 blue cards.

That's a very interesting list. It looks to me like a hybrid of Pitch Dredge and traditional Dredge with an anti-hate sideboard. Very promising, and one of the applications of Prized Amalgam I hadn't considered.

Prized Amalgam (PA) doesn't really have a place in pure Pitch Dredge because the decklist is extremely tight, in my opinion far tighter than a traditional Dredge list. You can see this my decision to eschew Bloodghast (a decision that I think is mostly emulated). In theory, PA might be worth running over Ichorid because it is blue, but I think giving up Ichorid simply gives up too much margin in too many matchups.

In pure traditional Dredge, PA also has little place because Ichorid, Narcomoeba, and Bloodghast fill out the creature suite comprehensively and being blue (or even black) is not a particularly strong merit.

In a hybrid list, Prized Amalgam may have some merit (as Glackin seems to be demonstrating). Such a list would generally desire more creatures than are run in pure Pitch Dredge, and would place enough weight on being blue to potentially give PA the nod over some of the less laggy threats.

@ajfirecracker I highly doubt cutting Ichorid would be a good idea. I'd probably cut Mindbreak Trap since it's terrible and the only reason it's in Pitch Dredge is because it's Blue.

@DeaTh-ShiNoBi I can speak with a little confidence as to why it's in the deck, and the desire to metagame against combo decks was definitely one of the factors in its inclusion. Pitch Dredge (specifically the Mindbreak Trap / Chancellor of the Annex variant) was developed in response to the MTGO Classic (Vintage minus key power cards) environment immediately before the release of Vintage Masters. In that environment, Belcher and other combo decks had an outsized presence and I simply kept Mindbreak Trap in the deck as long as it was performing well and there was no better replacement.

I do think there is merit to the concept of replacing Mindbreak with Prized Amalgam in "pure" Pitch Dredge, but a big part of the appeal of Mindbreak is the value of the card post-board and in the relevant matchups. I think only time and testing will distinguish which is more important. My intention at the moment is to sit on the sidelines for a bit and watch the metagame develop, and either to run with the ideas that others develop around Pitch Dredge (Glackin's list is exciting) or to eventually form a new list for myself.

Being able to remove the PA to the Force of will and Unmask makes its pretty great for pitch dredge, its removable to ichord and returns off the narcomeba it manages a lot of versatile could see its as a 2 of in any pitching dredge list.