[GRN] Experimental Frenzy
This topic has been deleted. Only users with topic management privileges can see it. 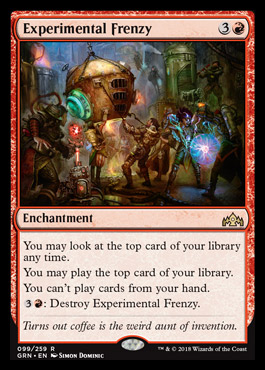 Well it's a cheaper, REB-immune, more splashable Future Sight where you don't reveal your top card. I love it.

The drawback isn't irrelevant though, but I believe this is a more playable card in Vintage than Future Sight, which sees fringe play, I know, but anyway.

This is a card that can be played in a lot of different decks, Storm for example, where Future Sight could not - it's a nonbo with Bargain, for sure though.

Future sight is actually nutso. Both it and Magus of the Future have seen play. I think they're both just a hair too vulnerable and unwieldy to be unbeatable and widely played (for example, I'm 99% that Future Sight in play is better than Teferi in play, but one is easier to cast and a lot less clunky.)

@neo_altoid Oh don't get me wrong, I love Future Sight/Magus, but UUU makes it very hard to play. 3R is a lot easier. Though the drawback means it's harder to play in a control deck. But in that Aperture Science beauty that was seeing play a while ago...

It can combo off with Sensei's Diving Top for infinite storm and card draw.

It can combo off with Sensei's Diving Top for infinite storm and card draw.

You need Helm of Awakening for that. It's clunky.

EDIT: but yeah, way easier to pull off than with Future Sight.

That combo is very old at this point and very hard to pull off. Maybe it can combo with Aetherflux Reservoir

@moorebrother1 it's clunky because it's a 3-card-combo, not because you have other (worse) options than Helm

Of course none of the 3 cards are restricted, and 2 of them help find the others, but anyway.

You can still cycle cards from hand with this in play correct? Combos well with street wraith if that is the case, can pull your land away if you cannot play it.

To be fair, Bargain would still do the trick. You can pay 1 life to draw a card you can't play on top and keep playing whatever else you find on top.

To be fair, Bargain would still do the trick. You can pay 1 life to draw a card you can't play on top and keep playing whatever else you find on top.

You're right, forgot about that. Even Necropotence could do that! Hum... this feels great. It reminds me of the Uba Mask / Bazaar engine a little bit.

I fail to see the joke... they can just destroy it by paying 3R when they want.

Assuming they have red Mana?

I wonder if this has some place in a red-based storm deck with rituals, Bonus Round and Past in Flames - possibly with Bazaars if cards in hand aren't important? Or some of the red effects that exile cards for you to play rather than put them in hand (Chandra).

Always nice to see a strange, clunky red enchatment in a set!

It works less than favoriable with Simian Spirit guide on the top. I "think" you can build a mono red beltcher with this as an engine and toss in 4 street wraiths toncycle the top, maybe faithless looting as well. Still eats it to countermagic or a sphere.

Assuming they have red Mana?

A deck with LoA and without red mana? I thought most blue decks in Vintage packed Volcanics and/or 3-4 Opal + Ruby/Lotus/Petal. Is the plan to spend 2 cards to give this to them and hope they won't draw their 5-11 red sources, specially when Frenzy and LoA help them?

My initial reaction to even seeing this card being discussed in the forum was shock. I simply could not possibly see this card being 1) worth paying even a single mana for 2) it costs 4 mana and forbids you to play the other cards in your hand.

But I gave it some more thought, pondered a bunch of what ifs, I tried to understand how anyone could think this card is anything but bulk rare garbage.

Even if you chain off 3-4 cards in one turn for 4 mana, in the dream scenario, I still think this card is total and utter garbage.

The reason why isn’t necessarily obvious, but it has to do with the cards inability to hold back spells when you don’t want to play them, coupled with the opportunity cost of playing this card one turn and then spending a whole entire other turn destroying this card to play the card you want.

Any deck with force of Will would never want this card. Because it basically negates the draw entirely. Now you might say, only you know the top card and your opponent doesn’t. The reality of the situation is, if you are unable to play the top card of your library it becomes a singal to your opponent. Know they know then can simply pass the turn, draw a free card, be unpressured because you wasted 4 mana casting this card 2 turns ago, and be confidant that you have a counterspell, that if you are so inclined to cast becomes instant negative card advantage because you have to sacrifice this card first to cast the counter.

Storm wants nothing to do with a 4 mana spell that relies entirely on chaining off spells from the top of your library. Even with manipulation like brainstorm (restricted), ponder (restricted), preordain, and the best one for this card ancestral knowledge, you will still find yourself in more situations where you fizzle because the top of your library simply doesn’t do enough to get you across the finish line.

In an Agro creature list, you are wasting a turn playing not another agro creature and instead a potential do nothing enchantment that it is laughable.

What if your top card is a second copy of this piece of shit.

I hate this card. It is bad. It is bulk. I’m sorry, I tried to find reasons to play this card. It’s iust not good at all. I’m not sure it would even be playable at 1 single red mana. It would be playable in shops if it was an artifact and colorless. The Red makes it unplayable in any deck that would ever consider it.

Belcher resurgence? Eh? Could be better than a draw 7

I totally agree with you. This card id bad. It is worse than future sight, in a worst colour. And FS is not played.

The only deck I could see this in, is Ubastax. You generally don't have cards in hand anyway and this would give you another card to go through your deck other than Bazaar.
However, this card needed to be an artifact in order to be even remotely considered.