[GRN] Mission Briefing
This topic has been deleted. Only users with topic management privileges can see it.
T
T
Tittliewinks22 Reply Quote 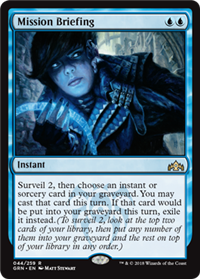 last edited by Brass Man
B
B
bactgudz Reply Quote

Seems very promising. Surveil 2 is arguably worth a 2/1 body...and snapping back FOW or Gush now sounds like fun.

Unlike Snapcaster, you can cast this without a target or chain them together, which is kind of interesting.

@vaughnbros many snapcasters have been cast without a target

@blindtherapy And still find one...

How does this compare to ponder? I think that is more relevant than snapcaster mage. Also, this would be great in Oath!

It gives you an improved scry 2 (which in grindy blue matches is better than a 2/1 body), feeds delve and doesn't target (which is great against non-definitive grave hate).

I don't know if it's better than snapcaster in vintage. I'm trying a 3 snap/1 JVP/1 briefing splash in URw mentor, and so far it has proved to be very useful flashing back a ravenous trap and digging deeper to good cards. The problem in this specific deck is the lack of finishers (3 snap/1mentor, besides the 2 JTMS).

@gutocmtt I'm actually currently testing an all in mission briefing deck with UW taigam to get tons of value off it. Also find that using it with mindbreak trap works exceptionally well.

So an interaction I overlooked until it came up in play testing.

Mission briefing says "if the spell is put into graveyard THIS TURN, exile it instead."

When you cast a spell with rebound it never hits the graveyard that turn, so you can chain mission briefings as repeatable ways to use time walk and ancestral recall.

Edit: would need a way to get rebound from graveyard*

@tittliewinks22 I must be missing something - how does Rebound come into play and allow for looping Mission Briefing on Time Walk/Ancestral Recall?

@revengeanceful well it doesn't, I relooked at rebound reminder text and noticed it had to be cast from hand.

How are people feeling about this card so far? Compared to Snapcaster and/or Preordain? Thinking about using this in a control/combo deck.

@nower1990 I've been doing alot of testing with it. It's been great in gifts ungiven decks

I think it has a home in Legacy Miracles (with Mentors and Predict), but that's probably about it.

I've started testing this card in Oath. So far it has been awesome! Using two Mission Briefings allowed me to take strong new lines of play. Oath has experienced a downturn over the last four months or so because of various decks and the lines that were available to them. I think this card gives the deck the options that it needs handle and take advantage of situations that it previously could not.

@fsecco Sure, you can choose to play more counter spells in your Oath deck such as Pyroblast and Misdirection. You can also use Merchant Scroll, Demonic Tutor, and Night's Whisper. These cards allow you to defend against your opponents sorcery of instant speed blue spells by waiting with Mission Briefing to cast a Force of Will, Flusterstorm, Pyroblast, or whatever counter spell you might have. The tutors allow you to search up an instant speed cantrip, or whatever else you might need, and threaten to cast it again at instant speed.

I typically did not play Gitaxian Probe, but the options stated above have incentivized me to do so. These play patterns give you more options to combat Paradoxical Outcome without requiring an artifact that is potentially counterproductive to Oath's strategy. It is basically the Snapcaster Mage effect that the deck needed. The ability to cast more counter spells like Pyroblast and Flusterstorm is especially good against Teferi Control decks. The new creature card Emissary of Grudges is also a really good sideboard option against this deck.