Kazuul, Tyrant Of The Cliffs
This topic has been deleted. Only users with topic management privileges can see it. 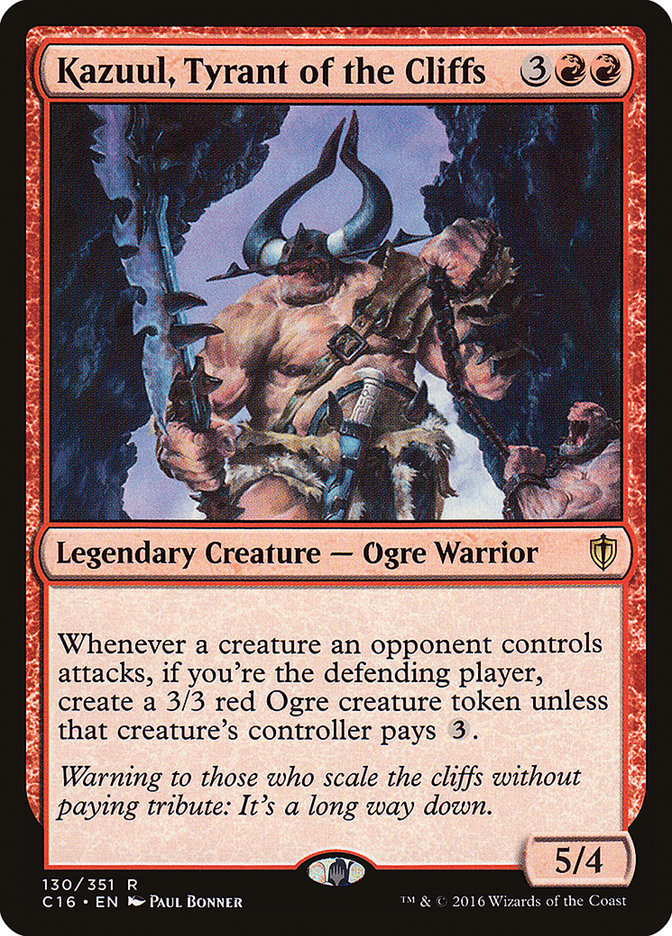 I'm interested in this guy as an Oath target. I like that I can hard cast him under grafdigger's cage. I like the interactions with Gisela, Blade of Goldnight. He's also really good against workshops -although less so in a Thraxos meta.

Am I crazy or is he that good?

Yeah, I'll give you more than one. The questions for cards isn't whether they're "good" in the sense that a card does an interesting thing, or even that it would be good against a particular deck. Assuming that a card isn't so good that it's a build around on its own (Oath, Paradoxical, Bazaar, Workshops... I'm lookin at you folks), then the question is really, can this card replace a card in an existing deck.

Here, this card on it's face looks like it might fit in Oath. So we should ask, is it better than a card that's already in? Probably not. And I see what you're saying about this card. It would be good on the field against decks like Shops and Dredge. Would it be better than other cards? I don't see it. It's not better against Gisela, or Gris. It's situationally better than Titan, but if we want 1337 tech against Dredge, where Kazuul is best, why don't we just run Elesh Norn, or just more graveyard hate maybe. Better options are out there, so this is unplayable. If this were the best creature for Oath, it would be great, but it ain't in the top 5, so it's basically nowhere.

@Topical_Island @Macdeath The creature suite I was looking at was the following from a Brian Kelly list,

Kazuul should replace Inferno Titan in this setup. He's marginally better than Titan in Xerox and Oath Matches and maintains the clock in PO.
I agree that this isn't a Griselbrand or Gisela, but an incremental improvement over Titan.

If this were the best creature for Oath, it would be great, but it ain't in the top 5, so it's basically nowhere.

What are your top five Oath creatures?

@john-cox I strongly disagree that Kazuul is an improvement to Inferno Titan. Titan is better in a gazillion ways, one of them being having value as soon as he comes into play.

For a while people were using magus of the moat, this performs the same function but is a clock.
I'll keep testing it, however I agree now that you guys are most likely correct.

@john-cox I don't see how it's a clock since it has no evasion though. And if you're treating it like a Moat, you're using the tokens to block. This isn't a Moat against Reality Smasher or Traxos or Blighsteel though, neither is reliable since it can be paid to wiff. Magus of the Moat was good because Eldrazi was a big thing in the format. Once if faded away and Ravager Shops became the norm, I believe the change to Inferno is correct. Actually I think Ballista had a lot to do with Magus being bad too.
I really don't think this is Magus + Titan. But well, I've been wrong about Oath creatures before.

At this point it's very hard to imagine that griselbrand isn't the best choice about 75% of the time. The corner cases where creatures like this are better are few and far between. The corner case where Inferno Titan excels is where you are staring down lethal at less than 7 or a planeswalker is keeping your creature at bay. In a jack not named oath of Druids this creature also has a lot of competition, cards like storm breath dragon exist.

@fsecco
Titan has it worse than Kazuul's in the examples you mentioned. The improvement Kazuul brings is that it buys you a turn, titan just gets eaten.
Assuming Kazuul gets oathed out first, the next turn gisela or griselbrand are coming. At that point you can deal with any of the mentioned threats with Gisela, Blade of Goldnight or Griselbrand and have 5-8 power on board in the form of Kazuul/Kazuul+elemental.
About the evasion, I have to qualify this by saying that that's a really good point and something I hadn't given much thought to. I don't have a deck to play against where this is relevant but I'm sure it will come up.
So far its been grindy, I let through some of my opponents stuff and then swing back with 1 token and kazuul, if I've oathed out a Gisela at that point thats 16 damage. I can still block everything on my opponents turn and the elementals are twice as good. I don't think it needs evasion.

@nedleeds I think your right about Griselbrand. I'd like to have multiple creatures out though and 3 creatures in the deck. Thats the only reason I don't have 3 Griselbrands in my deck.

@john-cox I was not comparing it to Titan when I talked about Blighsteel or Traxos, but to Magus of the Moat, to point out how better than Kazuul for a Moat effect. Opponents can pay to go through Kazuul with some damage, and that makes him not that "moaty".

One of the pros of Titan is that it cleans out Spirit tokens to actually hit the opponent. It's important for attackers in Oath to have evasion of some sort and Titan does that.

Another problem I see with Kazuul is that your opponent can guide the game to a scenario where you have more creatures than them (if you want it to be a Moat). That can be dangerous.

@nedleeds If Griselbrand costed 4BB is would be the only creature played maindeck in Oath (aside from the random Emrakul), I assure you that. The only reason other creatures see play is because they're castable.

Firstly, if you think Kazuul improves that creature suite against Xerox, or anything for that matter, then you should demonstrate it by playing it an winning. That's exactly how Titan Oath came to be.

Secondly, I think Titan is great against Xerox, and better than Kazuul. hitting planeswalkers and hitting for 9 on an empty board, and sweeping up token chumpers are all very valuable.

Thirdly, even if Kazuul is better than Titan in that, or any other match up, then the above analysis is still a bit incomplete. To play Kazuul, we would still have to say that it's better than 2nd Griselbrand or Gisela, as well as other outside creatures like Sphinx or Sun Titan or Muldrotha or Salvagers or... you get the idea. The complete analysis should be run.

For a while people were using magus of the moat, this performs the same function but is a clock.
I'll keep testing it, however I agree now that you guys are most likely correct.

^^^^
Thanks for the input guys, I will test the crap out of this guy and I can see for myself how he is.