Game Layout rules
This topic has been deleted. Only users with topic management privileges can see it.

I don't know if this was already discussed here, but I didn't know that until I played a PPTQ last weekend.
Turns out that now in any Competitive or Professional REL match it's mandatory that you play with your lands closer to you than the nonland cards. Before this was applied just to coverage matches on camera, now it's for all matches.

It's fun to picture how this rule applies to dredge.

It's fun to picture how this rule applies to dredg

This can be good example : 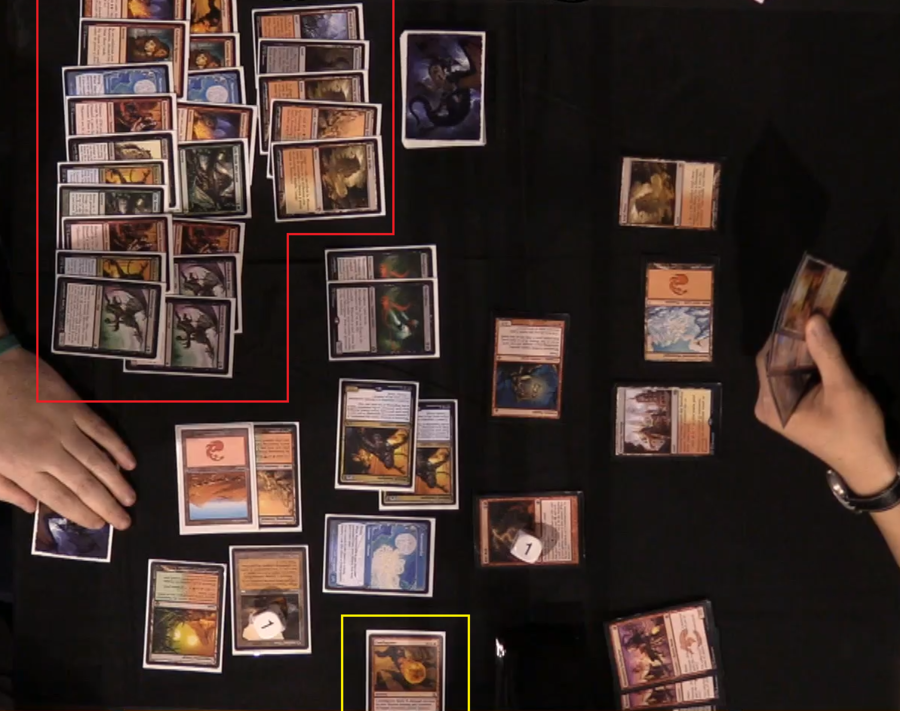 @matori I haven't looked at the rules again recently but I'm pretty sure that exile zone is illegal.

Worth noting that it doesn't say you can't play lands up front - only that they have to be behind other stuff creatures. You can still play your lands up front if you don't have anything else to put in front of them! I actually had someone call me out on an Island at the top of my playmat with no other permanents in play!

Am I the only person in the world who plays dredge without fanning their graveyard?

@brass-man ideal layout for dredge is deck in the middle-ish of the mat, graveyard in 1-3 columns on the smaller side(right), permanents to the larger side(left).

@brass-man I also do not. Sometimes I will slide each top card down slightly just so that the name under it is visible (and so on), but I never fan side-to-side.

Am I the only person in the world who plays dredge without fanning their graveyard?

We have a local who doesn't fan out their graveyard. I hate it because I'm constantly asking to look at their yard. I think that's this person's reasoning though - some people won't constantly ask so you can "get" people with a card they didn't know was in your pile.

It's fun to picture how this rule applies to dredg

This can be good example :

I see two bad things in this pic: one is that the exile zone should be next to the library, as pointed out by @thecravenone. The other (more speculative) is that having all that bunch of lands close to each other in the graveyard tells me that the gy order has probably been messed with, which is also illegal in Eternal formats.

@fsecco FWIW, this appears to be modern, and GY order does not matter in that format.

@jonhammack Sure. Thought it was Legacy, but didn't see the shocklands

Picture is screen shoot from Round 14 Grand Prix Phoenix feature match.
It's a modern.
Zones are outlined to show that Dredge player can keep clean battlefield even with fanned graveyard. I am not sure about Exile zone legality, but since this is from GP feature match I guess judges were ok with it.

@matori I don't know if this is Dominaria update or if it was already like this before, but now it's on the rules that gy and exile must be adjacent to the library.

Per the official notes:

"Players in exceptional situations (e.g. a player playing a deck with no lands or a deck that makes significant use of the graveyard) should consult with tournament officials to determine what allowance, if any, will be made."

The ideal layout for Dredge is nothing in play and everything in exile.

@oestrus I feel so much love between the two of you.

The same thing goes with board layout. As long as it's clear to all players, anyone playing a deck that relies heavily on the graveyard or exile may expand those zones.

If the setup of the game causes some confusion, the judge may issue a warning for Communication Policy Violation and could back the game up to the point of the decision that was made based on the incorrect information per IPG 3.7.

@dataspot That was true before Dominaria, but now you are obligated to put lands closer to you and gy and exile adjacent to the library (in competitive and professional REL). Except in cases like @Oestrus pointed out, of course.
You can look here https://wpn.wizards.com/sites/wpn/files/attachements/mtg_mtr_27apr18_en.pdf in section 4.6 Game Layout.

About the graveyard order, the rules says:
3.14 Graveyard Order
In formats involving only cards from Urza’s Saga

So I believe in Eternal formats you cannot change the order of the gy even if you don't play cards like Shallow Grave. I could be wrong though, but that's what I understand of the rules.

Good to know it's actually a rule. Mind you I've always played that way since I started playing ages ago.

What people really find strange is that I play all my cards facing my opponent and always have. I just figure I already know what everything in my deck does, so it just makes it easier for my opponent to read the cards. Anybody else do this?

edit: interesting. As per 4.6 this is illegal. "Each untapped permanent should face its controller." I've never been called on it. Perhaps because it says "should" instead of "must"?