[DOM] Traxos, Scourge of Kroog
This topic has been deleted. Only users with topic management privileges can see it.
R
R
ravager101 Reply Quote 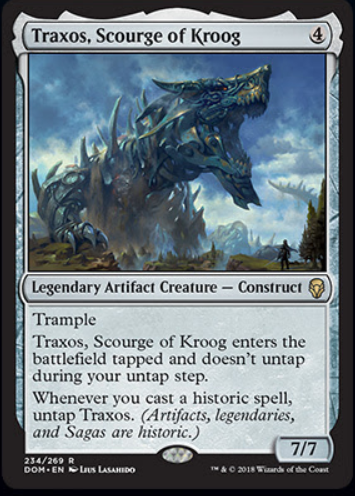 Seems like a reasonable pile of stats for shops, at least in the SB for the mirror. Four mana 7/7 trample hits super hard super quick, and is significantly better vs Dismember than Precursor Golem. Of course, the (multiple) drawbacks are quite real and the upside of Precursor Golem alongside Overseer/Chief of the Foundry probably edges out bodies like this. Deserves to be tested imo.

This is a playable card with trample for shops. Trample plus arcbound ravager is a thing with some of these wide board states.

Please use the image tag to we have the image being displayed here instead of having to click on it.

About the card, it's a terrible, terrible topdeck. I think that kills it's utility in Shops. IF it came into play untapped I could see it seeing more play. But the problem is that if you topdeck this in an attrition war either you'll miss the ability for it to block that turn or you'll be unable to untap it unless you draw relevant again next turn.

PS: this combos nicely with Sensei's Divining Top, if that's at all relevant.

@fsecco If you were playing with this creature, surely you would hold back random late-game Moxen or other dead artifacts for this purpose?

I am not really sold on it but there is some potential. The drawbacks are real and the setup to play it efficiently can be awkward. However, it is null rod proof and that could be a huge plus.

This is an awful topdeck when you're Hellbent but you could warp your lands package to make it less-worse using Inventors' Fair and Buried Ruin. Not sure if it's worth it but those cards aren't terrible by themselves.

That said, it's a powerful card with an interesting 'drawback': if you are flush with spells it basically has Vigilance.

@fsecco If you were playing with this creature, surely you would hold back random late-game Moxen or other dead artifacts for this purpose?

Yeah but that's very situational, and also plays badly with the Ravager plan. I'd say it'd be much better to topdeck Precursor or Wurmcoil over this in virtually any situation.

I like the synergy with tangle wire. Tap this down, play mox untap it and attack.

@albarkhane I have an untapped Traxos, in play on my upkeep (i played a mox last turn). I tap it down to tangle wire. I go to my main phase i play another artifact, i untap my traxos. Synergy.

@garbageaggro oh ok, i see. My bad. I must say i am not exactly convinced by it because usually having 3 permanents to tap for tangle is not the most difficult thing to get. Actually you have them if you are in the setup you describe but i agree that it will help you to keep your mana untapped if you are really low on permanent.

Most shop decks are playing 18 lands so that means 70% of cards are artifacts and 30% are not. 7/7 is a three turns clock but given that percentage actually it is a four clock (another way to say it is : 7*0.7 = 4.9 . So this creature has sort of a practical strenght of 5). Given that result and its casting cost, one can compare it to lodestone golem for example.
Would we play a lodestone golem that has trample, that is more resistant to chumpblocking and is lightning bolt proof but that misses the sphere effect ?

Seems pretty broken in a workshop deck, where 4 mana is equivalent to a 2drop. You get a 7/7 with trample and effectively vigilance most of the time.

My opponent just went turn one Traxos two games in a row. I died.

FORCEOFNATURE Reply Quote
This post is deleted!
last edited by

This card is fantastic in bad shop decks with Null Rods, Smokestacks and Crucibles. It copes with Walker and Ravager way better than Wurmcoil which gets chump sacc'ed. Can't be Dismembered. You can also psuedo protect it with Karakas. Reminds me of Metalwork Colossus, but that card was such an early game cinder block in hand. This guy actually comes down fast.

My opponent just went turn one Traxos two games in a row. I died.

Good. Glad to hear this.

I played a Workshop Aggro/Combo deck (something we've been calling Brass City Vault) with 2 Traxos, Scourge of Kroog and 4 Voltaic Servant in the Challenge this weekend. Ended with a weak finish, but I have no complaints about those two cards specifically.

Just wanted to mention I played Shops with 4 Traxos at the TMD Open this past weekend to a 5-2 finish, missing out on T16 due to tiebreakers. Traxos was completely insane. I encourage you all to try it. My list was as follows:

You want to play four of them because it's better the earlier you play it. Besides the obvious reasons due to the untap clause, playing it early in conjuction with a lock piece (either before or after) often presents a tough fork for blue opponents with opening hands of average strength. Can they outrace Traxos if they counter or destroy the sphere? Can they set up under a sphere if they counter or kill Traxos?

I think people are worrying too much about the legendary clause. In certain archetypes in other formats, it is often correct to play 4 Thalia, Guardian of Thraben despite the fact that it's legendary. I think a similar remark holds here. Untap triggers are sometimes worth a card, so drawing multiples isn't even the end of the world...