[DOM] The Weatherlight
This topic has been deleted. Only users with topic management privileges can see it.
S
S
skeptimist Reply Quote 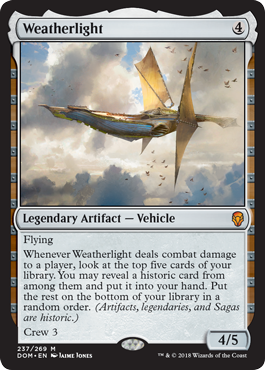 This card seems quite strong in Shops. It has the magical 4 casting cost that makes it a fairly consistent early play, and a flying 4/5 doesn't have to contend with much in combat in current Vintage. The card selection is amazing and a rarity in brown, only missing out on Lands and Dismembers in Shops. The only issue is the Crew 3, which is a bit awkward with the creatures currently typical of Shops, many of which have 1 or 2 attack. You can always play 2 creatures and double crew it though. It also puts a lot of eggs in one basket against Swords to Plowshares, Phyrexian Revoker, counterspells or artifact hate. Getting this stolen by Dack Fayden would also be a disaster. Overall I could see the card being a roleplayer.

Counterintuitive to the current shops aggro plan. I was excited initially, but after thinking about it I quickly cooled on the idea.

being stolen by dack fayden doesn't hurt that bad, since it doesn't do anything on its own, and crew 3 is substantially harder to do off a stray snapcaster mage than crew 2 is, and in either case is better than having an actual creature stolen.
the car is probably still better than this as vehicles go, but card selection in shops is worth looking over. this doesn't do anything the turn you play it, except possibly block something with flying or big that the things that crewed it couldn't.

Basically, if Smuggler's Copter--a significantly better card than this one--sees no play, this card really ought not to.

@neo_altoid said in [DOM] The Weatherlight:

Copter is not strictly better since its CA neutral where as this is advantage, I just think if you want a draw engine in your shops deck then a 4 mana do nothing that needs 3 power worth of dorks and a turn before it nets you 1 card is no the card you want to be running.

Skysovereign, Consul Flagship saw some play in the format but that is because it impacted the board when played and let you go over the top for potentially 9 damage versus moat effects, this is a slow card in a fast deck and there are better options for that like staff of nin or the immortal sun.