[DOM] Dominaria Rules Change
This topic has been deleted. Only users with topic management privileges can see it.

We're only making one rules change this time around, but it's a pretty big one. Those of you who follow me on twitter or are playing in the Magic: The Gathering Arena Closed Beta already have some insight into the change—one that's been a long time coming.

We're removing the rule that lets player redirect non-combat damage to opposing planeswalkers, and instead writing on cards (or in Oracle, for older cards) that a spell or ability can damage a planeswalker.

Yes, this is a pretty big change, with about 700 cards slated to receive errata and many more changing functionally even though their text will remain the same. But Magic will make more sense now. Back when we were designing the initial batch of planeswalkers for Lorwyn in 2007, we wanted to rules to work this way; damage spells should be able to hit planeswalkers directly. But not knowing if the new card type would be sticking around, we didn't pull the trigger on the massive errata back then, instead coming up with a rule that let players mostly mimic that functionality. And while "Lightning Bolt your Jace" became an acceptable shortcut, there were always several unwanted unintuitive interactions. For example, Leyline of Sanctity made Bolting Jace impossible, as the Bolt needed to target the hexproof opponent and then be redirected to Jace. Similarly, Turn Aside could not be used to counter a burn spell intended to kill a planeswalker. An Arc Lightning could not be divided between a planeswalker and its controller. Or a Bonfire of the Damned would kill all of a player's creatures, but only damage one of their planeswalkers, and then the player would no longer be taking damage themselves.

Those interactions were really confusing, even for longtime players, and continued to highlight the need for the rules to match players' intuition: damage spell and effects should just be able to target planeswalkers. So we're letting them.

But will we be writing the word "planeswalker" on tons of cards now? Not as many as you'd think. Our clever solution—for which we tip our hats to Richard Garfield's initial Limited Edition (Alpha) Lightning Bolt text—is simply to write "any target" on things that can damage creatures, players, or planeswalkers. As promised, here is Shrapnel Blast as an example of that text: 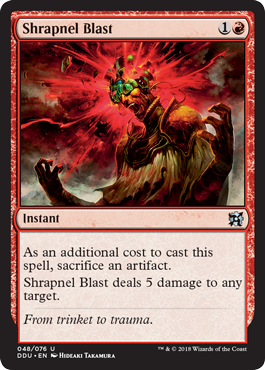 Shrapnel Blast
The words "any target" specifically mean "target creature, player, or planeswalker." So no, you can't Shrapnel Blast my Island. Or my graveyard. Not that you were going to try, but I guarantee you someone would ask.

How we are handling card errata can generally be broken down into four categories: 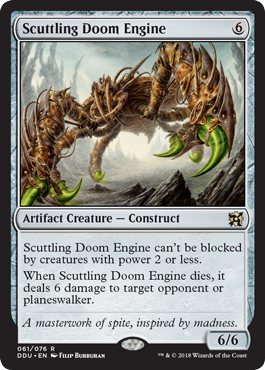 Scuttling Doom Engine
Additionally, we will be issuing similar errata on cards that can prevent damage to make sure the interactions between those cards and planeswalkers is clear.

Some things change, others look like they do but don't. If you are interested in more of the details, look for Eli Shiffrin's Rules Update article that will come out in advance of Dominaria. He'll go over everything in more depth and provide lists of all the cards that will be changing.

We're removing the rule that lets player redirect non-combat damage to opposing planeswalkers, and instead writing on cards (or in Oracle, for older cards) that a spell or ability can damage a planeswalker.

Yes, this is a pretty big change, with about 700 cards slated to receive errata and many more changing functionally even though their text will remain the same. ....

But will we be writing the word "planeswalker" on tons of cards now? Not as many as you'd think. Our clever solution—for which we tip our hats to Richard Garfield's initial Limited Edition (Alpha) Lightning Bolt text—is simply to write "any target" on things that can damage creatures, players, or planeswalkers.

How we are handling card errata can generally be broken down into four categories:

@thecravenone While it's mostly more intutive, there's a few things I don't like about this:

Obviously, these are fairly minor complaints and I shall suck them up and get on with the game. But I don't know... was the change really necessary?

So I don't think the change will have much impact on Vintage players. Vintage is already so loaded with errata and rules changes that to be a competitive player, you basically have to memorize the oracle text for 100s of cards to begin with. The change to Lightning Bolt will be unnoticeable compare to the change to Time Vault or the various cards with completely changed functionality like Alpha Nether Shadow. In fact, my personal Lightning Bolts from Alpha will have more accurate rules text after the errata than they do now

Compared to the massive rules changes between now and when I started, this is kind of minor.

I definitely think this is costly for new players, but I trust WotC on this one. I think this is an example of Wizards thinking very long term, and focusing on the design holistically, and reexamining very core beliefs, and treating the rules-set as a work in progress, and I think all of these things Wizards could do even more than they're doing now, so I applaud this effort.

Ignoring the logistics of errata, this makes planeswalkers a lot more intuitive ... I expect most new players already thought the rules worked this way (the old rules were genuinely kind of silly ... they added a lot of complexity and no depth)

Just a quick callout, attacking planeswalkers is unchanged. You're still deciding "Do I attack Andy? or do I attack Jace?". Since many cards which damage players will continue to damage planeswalkers in the future, I think Planeswalkers are still going to hold a very unique spot in the game as "mini players." There is a pretty gigantic difference between this and a creature with Defender (if you could chose whether or not to block with Jace ... good lord would that card be overpowered)

Things are very confusing now, but in a few years a huge portion of players will have never played the game with the old rules-set, and a large number of them may NEVER own a card that was printed before this change. Once we hit that point, the built-in downside of a rules change/errata being confusing vanishes. If you expect magic to be around for another 20 years, these sorts of changes are a necessity.

I, for one, am supremely bummed that Chandra,Torch of Defiance, will no longer allow for damage "directly" to other other Planeswalkers. I find this to be an unnecessary consequence of the decision, and for other things like Rolling Earthquake, et. al. I loved Chandra's role in Vintage, but now I'm afraid that she might not be good enough any more. Her ability to "attack" Jace, Dack, and Tezzeret was a welcomed feature within her abilities, making her unique in that few other Planeswalkers can interact with other opposing Planeswalkers. Does it make her garbage, of course not, but it weakens her for no other reason than to try and make Lightning Bolt on a Planeswalker clearer. I don't find this as something that was necessary at all. Sure, Leyline of Sanctity didn't mean that a Bolt could kill a Jace, but by the definition of what a Planeswalker is, was it really all that much of a leap to understand that Leyline helped protect your Planeswalking buddy?

That's a 1 in 100 relevant thing...but it's for sure going to come up at some point. And it will be hilarious.

Couldn't you already do this? With an Emblem out, Pyroblast a Planeswalker, and you get to steal it? Obviously the Pyro shouldn't kill it, so either you Pyro a non-blue Planeswalker or you counter your own Pyro?

@hrishi yes. I believe the distinction is that dack emblems can now steal planeswalkers off of lightning bolt or the like

It's finally time for my Dack Fayden + Lava Dart deck to shine.

@brass-man I can't wait to steal two Planeswalkers with one Fire/Ice.

So does Earthquake still kill Planeswalkers or not?

So does Earthquake still kill Planeswalkers or not?

Earthquake doesn't target so no.

If Earthquake no longer impacts Planeswalkers then this is a big hit to the Baral Burning Wish deck. Also, the most iconic anti-Jace card of all time, Blightning, now does nothing?

This change is nearly as big as the stack rules change or the mulligan change... so many changes

Side note; Earthquake is better than Rolling because you kill Zombie tokens but not Narcomoebas.

@desolutionist Blightning does technically do 3 damage to target player. We'll have to wait to see the specific eratta but I would wager it gets functionally preserved with "that player or that planeswalker's controller discards two cards."

By the rules above, Blightening should still be able to hit planeswalkers. The discard 2 cards is not part of a calculation or information used to determine damage. Its simply a secondary effect of the spell. A player with 0 cards in hand can be targeted and damaged by blightening so there is no reason a planeswalker couldn't be. And the discarding 2 cards has no affect or bearing on the damage done to the player. I guess we'll have to wait for the errata to be sure, but from the rules above, blightening should still hit planeswalkers.