RIX and Oath
This topic has been deleted. Only users with topic management privileges can see it.

Are any of these targets good enough for Oath? 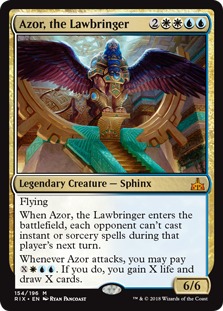 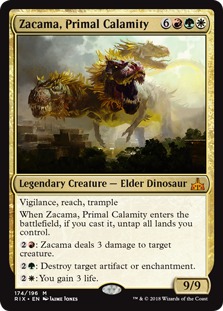 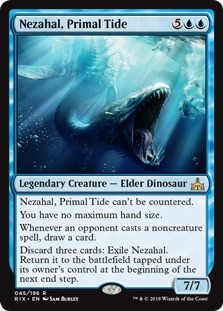 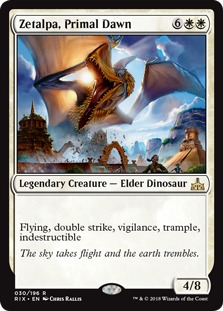 The question isn't are they good enough for Oath really, unless you're just trying to be different for the sake of difference. The real question to ask if these cards better than just playing Gris, Bomberman, Emrakul, Titan, Demon?

In a super controlling, mana heavy build, I can see an honest attempt at running Azors.

The holy grail of Oath creatures has all of the following characteristics. They should be big (fast clock). They should have an evasion ability (to not get chumped by tokens). They should be hard to get rid of (Untargetable, Draw you cards so you can find counterspells, Something). They should interact right away when they come down. (See Gris, or Titan, or Bomberman combo) They should be castible in the late game (Again see Titan, and Bomberman). And bonus feature - they should be blue. (A real problem with Oath is what to do when you draw your creatures. Being able to pitch extra copies to a FoW is surprisingly valuable.) Bonus feature - Non-legendary if possible. (To be able to put multiples on the field and to dodge Karakas.)
So that's what the perfect creature looks like.

Azor has many of these features. It interacts right away. It has evasion. It can gain life and draw cards. It protects itself to some extent. Its castable. It's blue... So that's at least interesting.

Not since Tidespout Tyrant has there really been a blue creature you could run in Oath with a straight face (Sphinx and Inkwell got close there for a while). But all in all, I question if this is actually better than just running Inferno Titan.

Titan is much faster than Azor. It's a much quicker clock. It's non-legendary so you can jam multiples in your deck no problem. And it's as castable as Azor, though it isn't blue, but honestly, if you can cast it then you don't need to pitch it to FoW to make use of it.

The other fatties on this list look interesting too, but since I wouldn't say any of them are really castable, they are all probably just worse than running Griselbrand.

I for one actually think Nezahal is on par with Sphinx of the Final Word. Having a Mystic Remora attached to it is pretty great actually. It's a bit harder to protect from Swords since it doesn't have hexproof, but if your opponent needs to dig for that Swords he's in bad shape because you'll draw a lot. The great downside is that is has no evasion and that can hurt your clock a lot and make it impossible to race a Mentor.

Zacama seems good for the destroy artifact/enchantment ability, but it seems too pricey and Inferno Titan already takes care of most of the problems in Shops these days anyway.

The other 2 I don't see playing. Azor's abiltiy is too expensive and the cip trigger is just "kinda" useful. Zetalpa is just a big dumb beater so no.