[RIX] Flood of Recollection
This topic has been deleted. Only users with topic management privileges can see it. 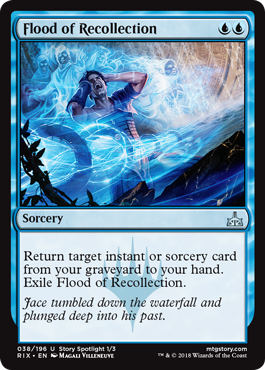 It's relearn/call to mind for 1 less mana plus an exile clause. Its already being compared to a poor snapcaster for other formats, but those formats do not have timewalk and ancestral. This seems very powerful to me in lists that run big power instants, and it has some applications with wheel effects.

Note the key difference here being that that unlike Yawg will or snapcaster, this gets exiled, not the power card you recycle, so you can timewalk or ancestral multiple times.

Price is still steep, so may not ever see play, but seems plausible to me.

Regrowth was already quite playable, but color-challenged. The double-blue mana cost penalty compared to Regrowth is worth the mana base improvement, not to mention its being pitchable to Force of Will. This almost clearly improves upon Snapcaster in the Oath matchup. The fact that you can spread the mana cost of the two spells over two turns is another bonus, even more so when trying to beat Spheres. Beating Cage is a third improvement over Snapcaster. I'm not sure it'll beat out those slots, but potential is there.

Regrowth can get Black Lotus, so this is probably just bad. Also double blue is arguably just as hard to pay as 1G.
It'll never replace Snapcaster since Snap is 1U instead of UU and is also card advantage since you get a body into play.

Regrowth into Lotus seems suboptimal the vast majority of the time. That's basically turning the card into a worse Manamorphose: +1 mana (same color, but can be used later), -1 card.

I also submit that UU is much easier for a mono-U or U/x deck to support than 1G. The U/x combo decks that don't use incremental damage to win (Tinker, Vault/Key, Depths, Painter) don't usually gain much value from Snapcaster, so "never replace Snapcaster" is a bit of a strawman.

Right or wrong, your points of argument could be better developed. The opportunity to chain Ancestrals or reload with a Force of Will (something Snapcaster can practically never do) seems to be worth further consideration.

Off the top of my head I cannot think of too many cards that this is out and out bonkers with other than timewalk and ancestral, but the benefit this has above snapcaster is very obviously the same benefit that got regrowth restricted years back, in that in multiple it compounds interest. You can still use it with Yawgs will for some truly scary turns, and it will make for some interesting Gifts packages potentially, so i could imagine it being good in doomsday lists.

That being said, the idea of turn one chaining timewalks does make me a little happy, even though I doubt it will happen in more than an handful of games.

Is this the return of Sex.dec?! Is this just master bait?!

@bazaarofbaghdad Regrowth into is a common play because you net +1 mana (it's not Manamorphose which nets 0 mana). I also mentioned PWs - but there's also artifacts, which are common hate in the format. Anyway, Regrowth is zero played, so this is almost a non-discussion because we're just spitballing what it could do, not what it actually does in the format.

I disagree that UU is easy for a deck to support. 1U is because of Moxen. UU is hard. Nowadays almost every spell we play costs just U so tapping that extra UU pseudo-doubles the cost of this. I'm not saying 1G is easy, but I this both are just as problematic.

About Snapcaster, I meant it'll never replace it as a staple card. Come on. EVERY card can be better than another if you craft a perfect scenario/deck for it.

I'll nod that this is easier than Regrowth to chain Gushes. Gro-a-tog would've loved this in the 2000s. Right now the cost feels steep and hard to pay for an effect no one really wants right now.

I don't love the card and I won't be testing it myself.

However, I do think it's worth mentioning ... if you're going to build around it, the first cast doesn't really have any serious advantage over Snapcaster Mage, JVP, etc. It only really has any value when you're casting them in multiples. Therefore, this is a card you likely run at 4 or 0.

Lack of synergy with Baral is a deal-breaker.

@ribby ...unless you're not running Baral.

@bazaarofbaghdad yes, true. I guess I just see the main payoff of Regrowth over Snapcaster Mage being its better rate with Baral.

Yes, of course there are other considerations, and maybe that could tip this over the edge of playability. But rate is still really important and this card falls short there.

If this was an instant this would be a format staple. As a sorcery, I doubt it will see much play.

This seems like a great card for a gifts deck that wants to be heavily blue and no green. Almost blue?

Are there any situations you would want to burning wish for it?

@bazaarofbaghdad players are legally obligated to play with Baral. You could say that he has us all bent over a Baral.