October 17, 2017 Banned & Restricted announcement
This topic has been deleted. Only users with topic management privileges can see it.

There are twice as many blue cards as artifact cards, and basic Island can contribute colorless mana for off-color or colorless spells.

If you restrict it to just Vintage playables, there are probably 200ish cards you might want to cast off Workshop(s), compared to 1500ish cards you might want to cast off an Island or with the assistance of Islands. Most of the 200 cards Workshop gives you access to are basically available to other decks, so the trade-off is something like "I will give up access to hundreds of cards I might want to play in order to play these 150 cards more easily and have the option to play a few of these 50 cards at all"

If Workshop is restricted, the deck will still be powerful and functional but not oppressive, regardless of future artifact printings. The problem is really the degenerate mana ramp that Workshop provides.

What is degenerate about it?

@pathym Workshop only allows you to play permanents, which severely restricts what you can do. I repeat: how many different strategies does Workshop allow to exist? Two at best? Moxen do much more than that.

I won't discuss the "blue workshop" because it leads nowhere.

So your Revoker or Sphere or whatever are realistically costed as 1-drops (ish). The aggressive Ravagers and Ballistas are 1-drops too. Precursor Golem is a 3-drop. Lodestone Golem is between 2 and 3. Foundry Inspector is reliably a 2-drop and not uncommonly a 1-drop, and can effectively double (and sometimes triple) your mana supply.

That's the real way to think about it. None of this "Black Lotus land" bullshit.

In isolation the Shop 1-drops are comparable to a few things that non-Shop decks have, like Delver. Their 2 and 3 drops are pretty world class. But Shops have no deck manipulation and some unevenness in their manabase so they will pay the cost of more mulligans.

It's not surprising that Oath does well since their 2-drop can outclass Shops' 2-drops. Spot removal isnt a "plan" because there are so many scenarios where even a Swords to Plowshares effectively costs more than the thing it's removing. It can complement a plan though, by taking out some of Shops' unbalancing elements (like Revoker) so that your actual plan can execute. If you don't want to Oath, you need to outclass Shops on curve some other way. I see a few ways to do this already in the Vintage card pool.

By the way, I have extreme happiness that combo is completely crushed by Shops and also oppressed by Missteps. I have no time for the line of thought that conflates the notion of "Dark Ritual is viable" with "Vintage is diverse and healthy".

The only card in Shops that feels unbalanced right now for me is Ballista. And that's because it makes Workshops cast non-permanent spells. Ballista can be treated as a sorcery spell most of the time. It also stifles creature strategies so much that it single-handedly makes any creature-based deck seem obsolete.

You think so @fsecco ? I respectfully disagree. Ballista is insanely synergistic but is a pretty below-rate effect in comparison to some of the other offenders. Point taken on the spell-like effect, but I think those have always existed (eg Serrated Arrows) at similar curve points.

I think if you're gonna go after Shops it has to be to address the overall curve inequality. If you don't go after the top offender in lowering the curve (Shop) then you go after the next best ones. So that would be Tomb, Sphere or Inspector.

By no means is this an endorsement of restriction. Still interested in figuring this metagame out. Just my 2c on a hypothetical.

@macdeath In theory this is great but when the ritual deck has to navigate blue instead it’s very disheartening. Over 14 rds of vintage spread over 3 events I only played shops twice

In my experience Blue matchups have always been a favorable matchup for Ritual storm combo (especially when gravehate is something like cage/priest and their dedicated combo hate is in the form of null rod/stony). Mental misstep, mindbreak trap and Flusterstorm are less effective against a good storm pilot than some people seem to believe.
If you knew all of your pairings were going to be blue decks, you would crush through that field with a storm deck. The only arguable downside would be the mental concentration required to navigate the matchup over many rounds.

Workshops post Lodestone Golem printing have always been the thing keeping rituals back. Since last b/r update modern workshops have a harder time mulliganing to a t1 sphere and have shifted their approach to become an extremely aggressive creature deck that happens to play lock pieces for tempo. You would think that storm stands a better chance since it's very hard to race a storm deck and hurkyl's recall has become much more effective in the matchup.

White Eldrazi is a ritual storm deck's boogeyman but it does not currently take much of the vintage metgame share and since it now has a much lower number of artifact lock pieces it looses some of its resiliency against the answers ritual storm can use in the matchup.

@ribby Serrated Arrows doesn't give the deck range, that's one key difference. It's also not a 2 mana threat. Ballista is able to control the board, give the deck range and direct removal of PWs and creatures; and is also a pseudo-Berserk for Ravager (the 2017 Psychatog). It just does so much.
I truly believe it's the reason the deck kept it's presence even after the restrictions.
The range it gives is crucial, because NOTHING solves the problem other than a hard counter (or Null Rod). If you're low on life and wasted counters on other stuff, you can just pray they don't draw Ballista.
I think almost every Shops game changes if they have Ballista or not.

People have kept repeating the mantra that "Shops is the deck that keeps Storm in place." Yet, I haven't seen much in the way of evidence to support this claim. If you look at the champs results, Combo (Storm and decks like 2CM) had a losing win percentage against Shops (37.5%) but was even worse against Big Blue (25%) and Blue Control (26.7%). And xerox was a 50% match up, so it's not like you gained much against other archetypes. Granted, this represents a small sample size, but I haven't exactly seen data that supports the hypothesis - just people's opinions.

If anyone wants to test this on MTGO, let me know. I have a spare set of power...I will stream it. I really do think this is an assumption that needs to be reevaluated, though.

@Fisken @Macdeath and anyone else?

@chubbyrain I agree with you, but to a point. I think Shops HELP keep storm in check. But imo what really keeps storm at bay is Misstep (and Flusterstorm to a certain point).

Sorry for skipping most of the discussion but shops are currently aggro, and should be attacked as such first and a mud deck second. (Arent we down to 7-8 taxing effects?)
....
I had something here but am drunk and I forgot most of what i was going to say. sigh
anyways, regardless of what gets restricted, Blue decks will be in the top 8 all the time. I believe that's more disturbing than shops beingONE of the top decks in contemporary vintage. I'm a few restrictions away from just .....bah, who am I kidding, I'm not quitting vintage anytime soon and will probably just take a break and go play more Commander or modern in the meantime.

Restricting blue cards when Workshops is the problem is precisely how we got into this mess in the first place.

So I think if more blue decks were built like this one and shops were still winning 5/8 spots I would be more worried. 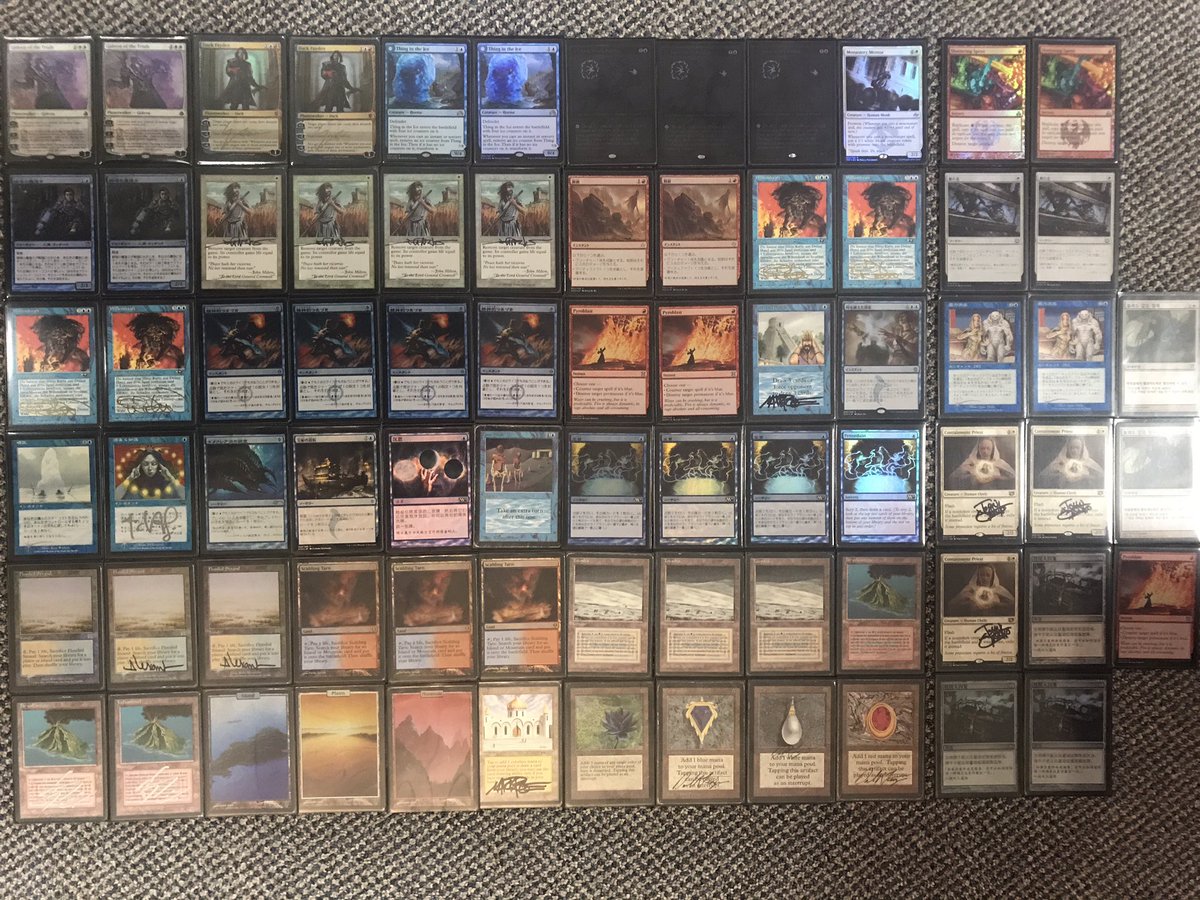 This is Aaron Katz's 5-0 deck from one of the vintage trials, and it 1) Looks awesome 2) I believe has a very positive shops matchup.

@garbageaggro Geez that JVP looks terrible (I mean it, I almost missed it was in the list). Thing in the Ice sounds really good against current Shops though.

@garbageaggro What is the plainswalker in the top left? Is that a Gideon? Also with the increased presence of Metamorph is thing in the ice any better than hurkyls (which is not so hot right now in non-combo)?

@p3temangus It's Gideon of the Trials.
Thing in the Ice blocks almost everything Shops while not transformed. If they Metamorph it after that yeah that's bad but it's a stalemate and you can still destroy their Metamorph with artifact hate.

I do not play much paper vintage, about once a month proxy tournament is all. But I play a lot of online vintage, a few league matches almost every day. I don't see any of the concern everyone is having over shops right now. In each league I only see shops maybe once, rarely twice, some not at all. I keep playing against quite a variety of different decks. WAY more variety than prior to the last restrictions. From an on-line perspective, vintage feels likes it's in a great place to me, and I don't see need for any changes. Shops is still a thing, but it is much easier to beat now if your prepaired for it. it does not seem any more OP than any other deck.
I can see people that don't play online, and eternal weekend might be the one tournament a year they play in could feel vintage is in a bad spot. But this was just one tournament.
I have been having a blast playing a variety of big blue mana drain type decks, and even some yawgmoth's storm decks as well. I would hate to see a mishra's workshop restriction, as it would remove a key part of the meta game. Playing to beat the shops lock seems fun to me, and it is as much a part of vintage to me as the blue mirrors or dredge are.