[XLN] Sentinel Totem
This topic has been deleted. Only users with topic management privileges can see it.

So, playable by virtue of being a differently named relic, just to dodge pith effects, which had been a thing in the past, and i think for gifts package. But does have some advantages.

Scry is worse than draw, but happens when played instead of when used. Also works with blinks.

Activation cost has no mana requirement.

Shrinks goyfs to 0/1 unlike something like tormods crypt which is free but one sided.

Worth getting a foil or 2 for your binders I am gonna guess.

Would rather have Tormod's against a field jam packed with mental skillstep.

If the cmc were zero and activation cost 1colorless or generic mana, I would love it. As is, it's ok.

Nah, it's worse than most of the other alternatives. And people are going to switch from Pith to Spyglass so mind games won''t work.

Its pretty rough when a Sentinel Totem does not pay homage to Sentinel in any way. 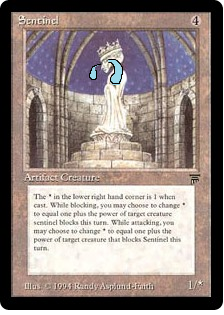