[C17] Heirloom Blade
This topic has been deleted. Only users with topic management privileges can see it. 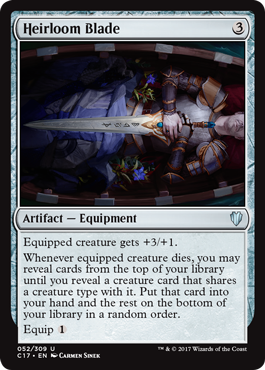 This has some viability in tribal Eldrazi (maybe fish?). A part of me thinks it would be fun to put in a mentor list.

Edit: I though I should broaden the original post as this card deserves more.

As far as blue decks go the most common creature type is Human (by far). If your playing mentor equipping a Snapcaster Mage with this gains a lot of value. You could block and trade your Snapcaster with a Thought-knot Seer and with this get mentor. If the odds gave you got another Snapcaster that's kind of better.
The cool thing about snapcaster and this card is you can flashback the revealed cards. You could almost use this in a vacuum and play with only snapcasters.
The tribal decks (that rely on consistency) would be great with this also. it doesn't really matter if you get a Though-knot Seer a Reality Smasher or an Endless One most of the time.
This card also makes delve better, and Yawgmoth's will better.
I really like this card I do wish it did more as an equipment.

The revealed cards go to bottom of lib, not grave. Otherwise this plus snappy plus Eternal Witness could def be a thing.

This card will be a hit in modern, simply for the fact that Skull clamp and stoneforge mystic are banned in modern.
I like how it plays well with trinket mage..
In vintage, we can do so much better.

@ten-ten Can't play this in modern, Commander products are only legal in Legacy or Vintage unless already printed in a modern legal set.

The most played removal spell in the format is Swords to Plowshares. This does nothing. At this cost I'd say Sword of Fire and Ice is much, much better.

I misread this, this card is terrible.

@mourningpalace ugh, sorry, I meant 'would' not 'will'.
Well, who knows, maybe it will be reprinted in Ixalan, since it's a tribal centered set. Wotc, have been known to preview cards from upcoming sets in duel decks before. I dont know of any in commander products but there is always a first.